These fish monitor water vibrations to avoid getting eaten • Earth.com 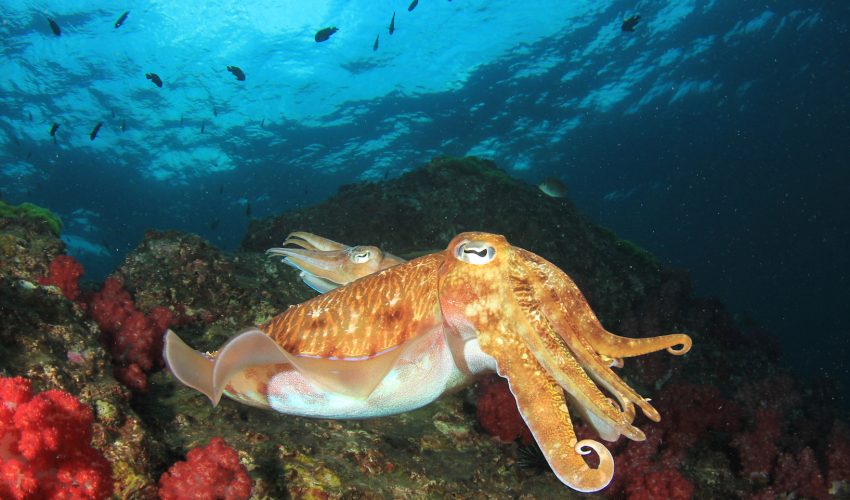 These fish monitor water vibrations to avoid getting eaten

While most of us humans have evolved from ever having to catch our food directly in our teeth, many species aren’t so lucky. This act is particularly difficult for aquatic species, where the force of the water from their approach often will push their meal away.

“It is impossible to eat something underwater without creating a hydrodynamic disturbance,” explains Maria Wilson from the University of Southern Denmark. Knowing that this surge of water – called a bow wave – produces low-pitched (low-frequency) vibrations, Wilson and her team wanted to see how cuttlefish respond to these vibrations.

Cuttlefish are the preferred snack of many large aquatic predators, and Wilson had reason to believe they might be keeping an ear out for the bow wave of an approaching attack. Wilson and her colleagues, Jens Haga and Hans Erik Karlsen from the University of Oslo, Norway, published their findings in the Journal of Experimental Biology.

The statocysts that are buried within the head of the cuttlefish act as ear, and are fine tuned to low-pitched sounds, potentially allowing these animals to sense the vibrations that announce an attack in low-visibility conditions. Using a specially designed tank, Wilson and Karlsen tested cuttlefish’s responses to vibrations in a calm and clear environment. This meant that any time one of their participants released ink into the water, “we had to remove the cuttlefish and clean everything,” says Wilson. She even took a shot of ink to the face from one of the cuttlefish, “Almost as if it did it on purpose,” she jokes.

With each cuttlefish tested alone in the tank, the researchers simulated a predator’s approach and its sucking attack with vibrations made by shakers on the side of the tank in both light and dark conditions. The team filmed the cuttlefish’s responses to the vibrations, and observed when they would become aware of the disturbance, as they changed the pattern on their skin. When a cuttlefish experienced vibration similar to a predator’s approach, they would turn to flee in the same direction that the bow wave was traveling – in both light and dark conditions.

Interestingly, when a cuttlefish was exposed to a pressure wave simulating the final suck of a predator’s attack, it would again move in the same direction as the flowing water – essentially right into the mouth of the predator. While Wilson was surprised by this behavior, she suspects that in the wild the animals may have already taken evasive action prior to the last suck of the predator.

The researchers also attempted to distract hungry cuttlefish with a movie depicting shrimp. “They only had to see the video once and when the screen went black, they would … just wait for the show to start again,” says Wilson. The cuttlefish would get so distracted by this movie that the team would actually have to turn up the shakers in order to get the animal’s attention.

Since cuttlefish depend on their ears to help evade a predator’s attack, Wilson is concerned that the low-pitched noise produced by shipping vessels may be distracting to these creatures, preventing them from successfully avoiding predation. While the predators aren’t likely to complain about this issue, it may start to be a problem if cuttlefish populations decline in areas with heavy shipping traffic.