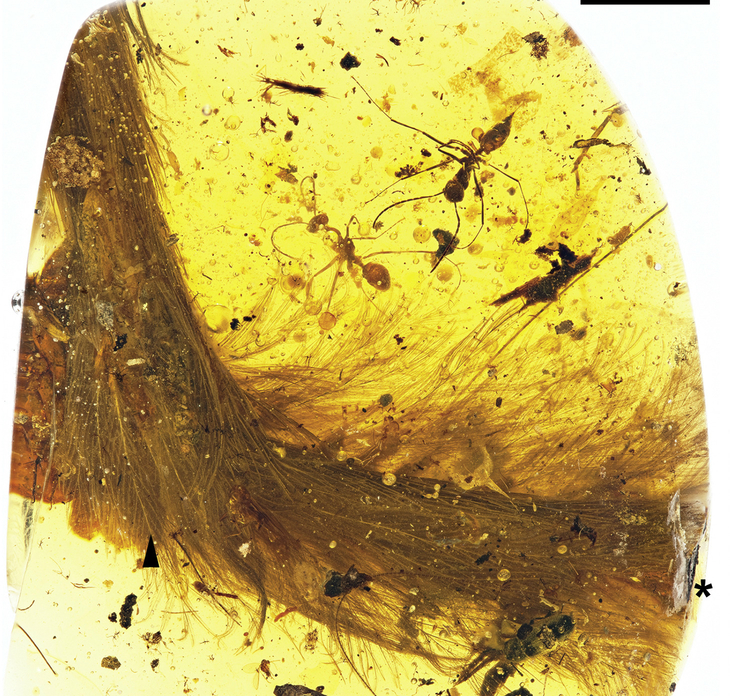 It’s a story reminiscent of the first Jurassic Park movie. A piece of amber purchased at a market in Myanmar has been found to contain an actual dinosaur tail. The amber was in the city of Myitkyina by Lida Xing of the China University of Geosciences in Beijing.

The vendor assumed the tail was some type of plant, but Xing believed it could be something far more significant. The amber was then sent to the Royal Saskatchewan Museum in Canada for further analysis. Scientists used CT scans to determine that the fossilized object in question was actually the feathered tail of a theropod dinosaur. The team believes the dinosaur tail most likely belonged to a coelurosaur from about 99 million years ago.

Their findings were published in Current Biology. According to Dr. Ryan McKellar, “The new material preserves a tail consisting of eight vertebrae from a juvenile. These are surrounded by feathers that are preserved in 3D and with microscopic detail. We can be sure of the source because the vertebrae are not fused into a rod or pygostyle as in modern birds and their closest relatives. Instead, the tail is long and flexible, with keels of feathers running down each side.”

The vertebrae alignment indicate that the tail belonged to a dinosaur, as opposed to an early relative of modern birds. The team also discovered traces of ferrous iron in the soft tissue layer surrounding the bones, a common mineral found in dinosaur blood.

“Amber pieces preserve tiny snapshots of ancient ecosystems, but they record microscopic details, three-dimensional arrangements, and labile tissues that are difficult to study in other settings,” said Dr. McKellar. “This is a new source of information that is worth researching with intensity and protecting as a fossil resource.”