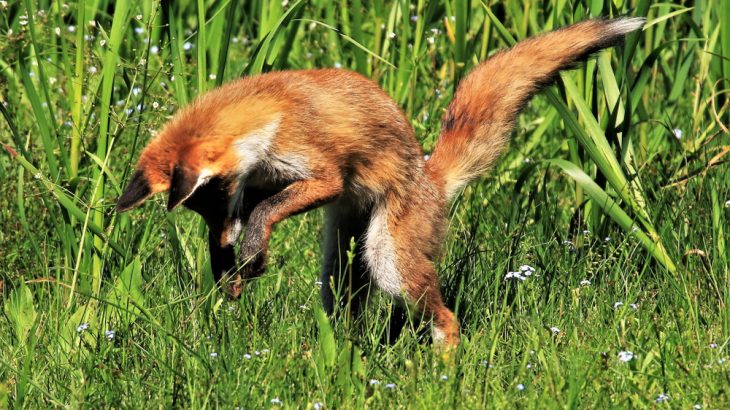 A study of the ear structures found in a variety of ancient skulls has led to a surprising discovery: a prehistoric dog species that hunted by pouncing on its prey like modern foxes.

The team of researchers from the University of Vienna performed CT scans on the skulls of 36 different types of carnivorans – an order of mammals that includes modern dogs, wolves, foxes, big cats and bears, among others. Some of the skulls were from six extinct species, including Hesperocyon gregarius, the first species of dog, and Epicyon haydeni, a dog the size of a grizzly bear.

The scans of the prehistoric dog skulls revealed that their inner ear changed its structure as their hunting style changed. The other carnivoran skulls showed the same pattern.

“For me, the inner ear is the most interesting organ in the body, as it offers amazing insights into ancient animals and how they lived,” lead author Dr. Julia Schwab told The Daily Mail.

The researchers found that the inner ear structure could help determine whether a species is more “dog-like” or “cat-like.” They also revealed clues to how the carnivorans hunt – or hunted, while they were alive.

Hunters that rely on speed, like cheetahs, develop larger ear canals. That helps to stabilize their head and their vision while they’re chasing down their prey, the researchers discovered.

A specific angled structure helps them separate the cats from the dogs.

And in the two prehistoric dog species, the structure of the inner ear was similar to that of a modern fox, include adaptations that would help all three species pounce accurately on their targets.

“The first dog and the largest-ever dog are such fascinating specimens to study, as nothing like them exists in the world today,” said Schwab, who is now at the University of Edinburgh.