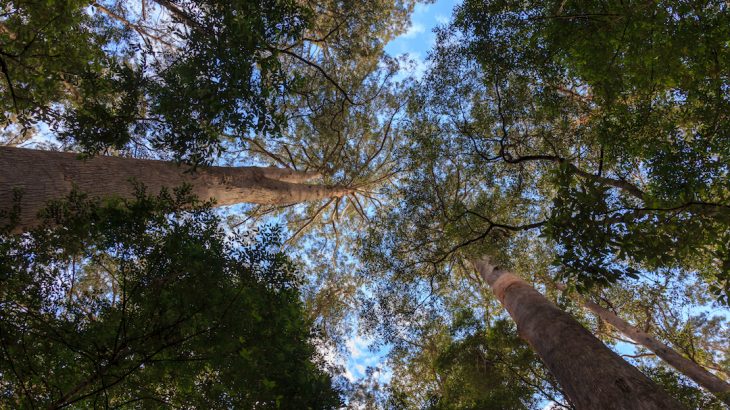 Americans have a tendency to think they have the biggest and best of everything.  If you think of the world’s largest trees, you probably think of the sequoias (Sequoiadendron giganteum) of California.  You’d mostly be right in this case.

Tasmania, the island south of mainland Australia, has its own giant trees.  One fabulous thing about the giant eucalypt trees of Tasmania is that many of them are hollow.  As these trees grow older, the heartwood in the middle of the tree naturally dies and eventually the tree rots into a living hollow cylinder.  I’ve stepped in through a hole in the trunk of one of these trees to find a dim interior space where ten people could easily sleep shoulder to shoulder.  These trees are often homes to bats and insects, making them less than ideal camping spots for many. The hollow space actually serves a useful purpose. Bat guano as well as dead insects create amazing fertilizer, delivered right to the base of the tree.  In fact, in Tasmania, more bats dwell inside hollow trees than in the island’s relatively chilly caves. 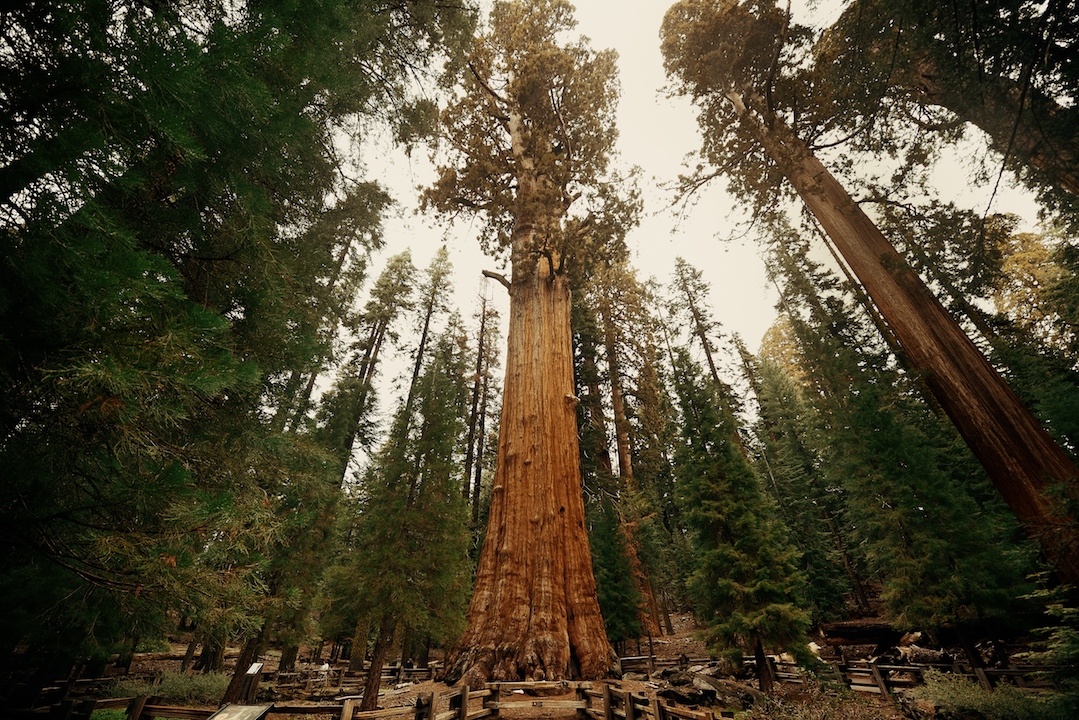 The tallest of Tasmania’s Eucalyptus regnans trees named Centurion measures 99.6 meters (roughly 326.7 feet) tall, according to ABC News.  Even though the tree is a eucalypt, the species is commonly referred to as mountain ash or swamp gum.  The enormous Eucalyptus regnans tree has a couple of distinctions that the redwoods and sequoias in California don’t have.  For one, the Eucalyptus is a flowering plant unlike the cone bearing giants in California. Centurion is actually the tallest flowering plant in the world and has a much faster growth rate than the California trees.  The giant trees in Tasmania are only about 300 years old compared to the thousands of years it takes for a tree like General Sherman to reach its proportions.

There is a greater diversity in the Tasmanian trees than those in California.  There are five species of Tasmanian Eucalyptus that have been known to reach heights of 85 meters or more.  The Tasmanian trees are the largest known trees in the southern hemisphere.  Mostly Tasmania’s Eucalypts don’t live long enough to quite reach the size of redwoods.  Australian Geographic reports that in many cases, older inaccurate measurements of trees are still used officially, which opens up the possibility that another tree will claim the title of the world’s highest.  There are other giant tree regions in the world that could possibly contend for the title of biggest.

Borneo is an outlier as a location for giant trees.  Tasmanian and Californian trees both grow in relatively cool, temperate rainforests.  The tropics, counter to much popular opinion, are not the best place to find the world’s largest or even oldest trees.  Trees seem to grow larger in temperate regions for the most part. Borneo seems to be the exception to the rule. Mongabay reported in 2016 on the discovery of the world’s tallest tropical tree.  Initially it was reported that a Yellow Meranti (Shorea faguetiana) discovered in Borneo was the world’s tallest tropical tree.  Within a few months however, another researcher reported finding 50 trees that were taller, also in Borneo.  The tallest tree in the group is 94.1 meters tall (roughly 294 feet). Unfortunately, giant trees aren’t always allowed to stand as beautiful living beings in their own right.  Deforestation is rampant in Borneo and across the world.

The redwoods and sequoias are but a slim reminder of a grander forest now lost.  In 2015, National Geographic asked the question of California’s forests, “Where have all the big trees gone?”  The answer is a complex one. The World Wildlife Fund reports that less than 4% of California’s original virgin redwood forest still remains with less than 2.5% of that portion protected.  Some of this loss came from floods but the flood damage was worsened by deforestation in neighboring watersheds. Logging for wood of course plays a role in forest loss but so does conversion of land for farming and grazing.  Encroachment of neighborhoods and poor fire management techniques have also contributed to forest loss, but National Geographic reports that climate change may be most to blame.  Since the 1930s, water loss from increased temperature has been a leading factor in the death of giant trees in California.  The giant trees in the rest of the world face similar threats.

Borneo, the forest with the largest tropical trees, a place magical enough to partially inspire Avatar, has one of the highest deforestation rates of anywhere in the world.  According to Borneo Futures, in 1973, 75.7% of the tropical island was covered in forest.  By 2010, only 52.8% of Borneo had forest cover. From 2000 to 2010 alone, 12% of the 2000 forest cover was lost.  More wood is harvested from Borneo than from Africa and the Amazon combined. Smithsonian reports that the deforestation rates in Borneo are twice those of other tropical forests.  This amounts to a loss of 30% of the forest by 2014. Sadly, the forests in Tasmania aren’t safe either.

Tasmania, home to the southern hemisphere’s largest trees, has long been a battleground between environmentalists and logging.  The Guardian reported in 2016 that the Australian Government had planned to log inside a World Heritage designated forest.  The plans were dropped on recommendations from the UN, and it shows a distinct disregard for an incredibly unique forest.  According to a 2009 report from Mongabay, 78% of Tasmania’s original forest has already been cleared or is open to logging.  Most of the trees cut in Tasmania aren’t even used for wood but made into paper.

The topic of widespread destruction of plants older than many nations brings with it the weight of morality.  How can we who are small and young be so destructive to entire microworlds teeming with insects, orangutans, mosses, birds, and entire tree bound ecosystems?