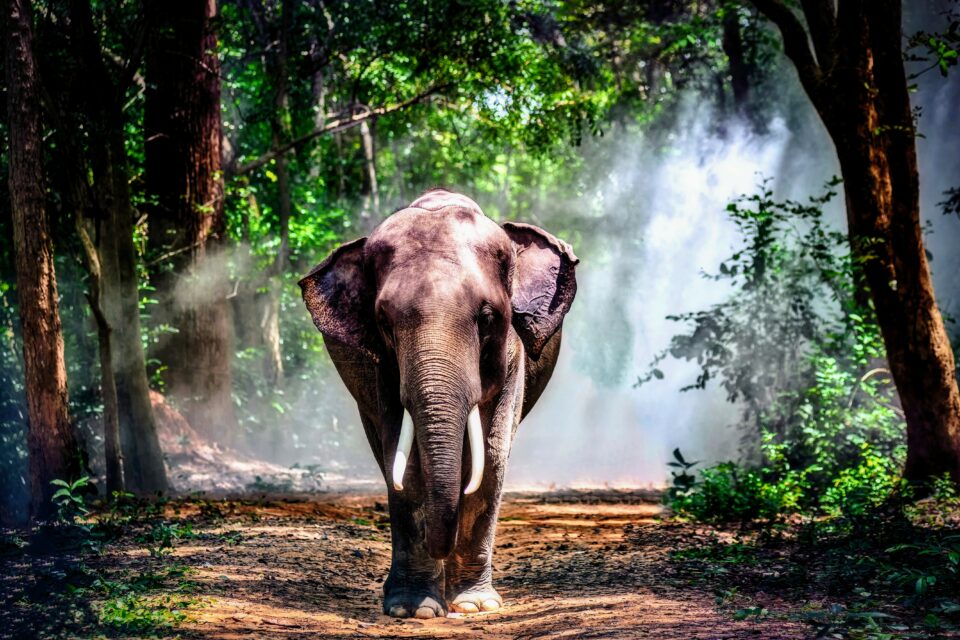 During its recent update of at-risk plants and animals to be included on the “Red List,” the IUCN decided to recognize two species of African elephants. Apart from the better-known savanna elephants (Loxodonta africana), they have also included the more reclusive forest elephants (Loxodonta cyclotis) as a species, after new genetic evidence of their status emerged. Forest elephants occur in the tropical forests of Central Africa and West Africa, and their numbers have declined drastically in the past 30 years – to the extent that they are now deemed critically endangered by the IUCN.

Humans do not have a good record when it comes to the way in which we have treated elephants. We have killed them for their ivory, made them work for us and perform for us, consigned them to captivity and reduced their habitat to fragmented patches. For forest elephants, poaching and habitat loss have taken the worst toll and resulted in the loss of around 65 percent of individuals in the past 12 years.

This decline in forest elephant numbers may have serious consequences for carbon storage in tropical rainforests, report Saint Louis University researchers and colleagues. The scientists state that, if the already critically endangered elephants become extinct, the rainforests of Central and West Africa would lose between six and nine percent of their ability to capture atmospheric carbon, thereby contributing to planetary warming.

Stephen Blake, who is assistant professor of biology at Saint Louis University and senior author on the research paper, has spent much of his career dedicated to studying elephants. In the report, published in Proceedings of the National Academy of Sciences, he and lead author Fabio Berzaghi from the Laboratory of Climate and Environmental Sciences (LSCE) in France, along with colleagues, document exactly how the ecology of these mega-herbivores ends up having such a strong influence on carbon retention in African rainforests.

“Elephants have been hunted by humans for millennia,” Blake said. “As a result, African forest elephants are critically endangered. The argument that everybody loves elephants hasn’t raised sufficient support to stop the killing. Shifting the argument for elephant conservation toward the role forest elephants play in maintaining the biodiversity of the forest, that losing elephants would mean losing forest biodiversity, hasn’t worked either, as numbers continue to fall,” explains Blake.

Elephants tend to forage more intensively on low carbon density trees, which are more palatable and nutritious. This reduces the density of trees and introduces more light within the canopy, resulting in less competition between trees for light, space and soil nutrients. In this way, the high carbon density trees are able to flourish.

“Elephants eat lots of leaves from lots of trees, and they do a lot of damage when they eat,” Blake said. “They’ll strip leaves from trees, rip off a whole branch or uproot a sapling when eating, and our data shows most of this damage occurs to low carbon density trees. If there are a lot of high carbon density trees around, that’s one less competitor, eliminated by the elephants.”

Elephants can change the structure of the forest by their foraging activity, and they can also help regenerate areas by dispersing seeds. The fruits of high carbon density trees, in particular, contain nutritious flesh and seeds. The animals favor the fruits of these trees and the seeds they consume pass unaffected through their  guts. In fact, some seeds will not germinate without first travelling through an elephant’s digestive system and being deposited on the forest floor in a pile of nutritious dung. These saplings will, in turn, become some of the largest trees in the forest.

The actions of these elephants can therefore influence the carbon levels in the atmosphere. High carbon density trees store more carbon from the atmosphere in their wood than low carbon density trees, which helps limit the extent of global warming. Given this important role in mitigating climate change, it becomes even more urgent to conserve the forest elephants of the Congo Basin and West Africa.

“The illegal killing of elephants and the illegal trade remains active,” Blake said. “Ten million elephants once roamed across Africa, and now there are fewer than 500,000, with most populations living in isolated pockets. These elephants range from endangered to critically endangered, with their numbers plummeting by more than 80 percent in the last 30-plus years.”

“Elephants are protected under national and international law, and yet poaching continues,” he explains. “These illegal killings must stop to prevent forest elephant extinction. Now we have a choice. As a global society, we can continue to hunt these highly social and intelligent animals and watch them become extinct, or we can find ways to stop this illegal activity. Save the elephants and help save the planet, it really is that simple.”