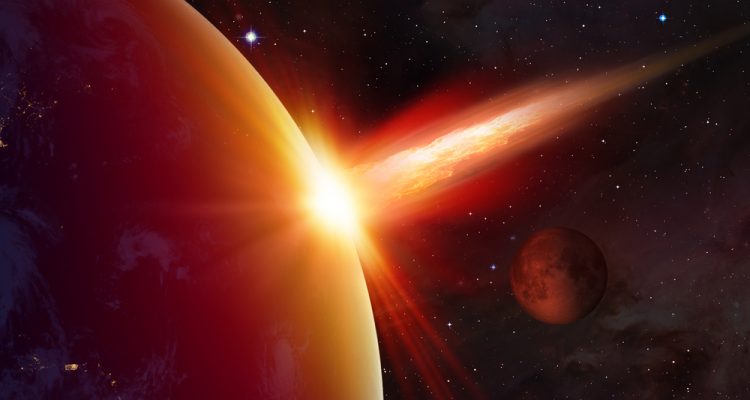 Almost 4 billion years ago, the rocky debris of failed planets that never managed to fully form may have slammed against the surface of Earth, the moon, and other terrestrial planets in our solar system.

It has long been accepted that this period, referred to as the Late Heavy Bombardment (LHB), was caused by a body of asteroids that currently rests in the belt between Mars and Jupiter. New research, however, suggests that huge rock and dust clusters that remained after the formation of the failed planets were instead responsible for the giant craters on Mars and the moon.

According to impact scientist William Bottke of the Southwest Research Institute in Colorado, the LHB was likely a result of ‘dancing planets,’ a phenomenon in which larger planets leave residual matter as they migrate. That material then pummeled the surface of smaller planets in the solar system.

“We have evidence for two early-bombardment populations and a time difference between them – a late one, plausibly made my escapees from the asteroid belt, and an early one from elsewhere,” Bottke told Space.com.

The surfaces of terrestrial planets, including Earth and Venus, were scarred by the LHB some 3.8 – 3.9 billion years ago. Evidence of such may have been erased by weathering and tectonics on Earth and volcanic activity on Venus. Scientists have long attributed this marring to the cluster of astroids in the belt between Mars and Jupiter.

Researchers now suggest that these objects originated in two separate regions and rained down onto the surface of the planets at different times.  A recent paper suggests that planetesimals – the debris from the formation of planets – was solely to blame.

“We find that asteroids were probably not responsible for the LHB, independently of whether the dynamical instability on the outer solar system happened early or late, because the calibrated flux is not large enough to explain the ancient lunar record,” writes Bottke’s colleague David Nesvorny.

“Comets and leftovers of the terrestrial planet accretion probably provided a dominant source of impacts during the early epochs,” Nesvorny adds.

However, Bottke warns that additional research is required before we abandon the LHB theory entirely.