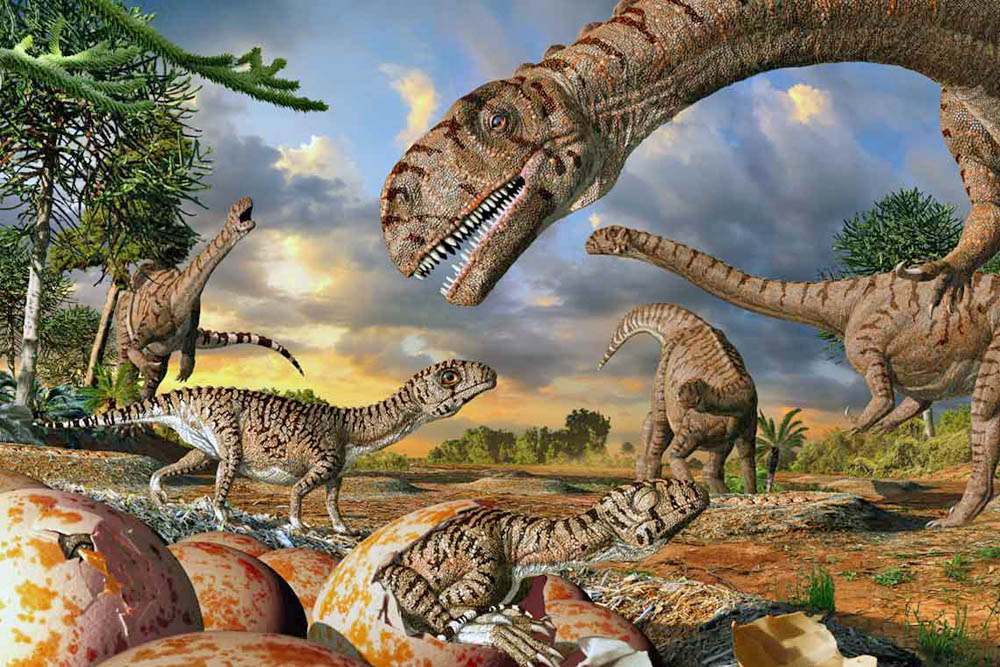 Paleontologists from the University of Alaska Fairbanks and the National Park Service found the first dinosaur bones in Denali National Park during an expedition in July. They also discovered several new dinosaur trackways, which are fossilized impressions left by ancient animals walking through mud that eventually became rock.

Pat Druckenmiller, curator of Earth sciences at the University of Alaska Museum of the North, is leading a collaborative project with Denali National Park over the next several years to explore additional areas and make new discoveries.

“This marks the beginning of a multi-year project to locate, document and study dinosaur fossils in Denali National Park,” Druckenmiller said. “This is a world-class site for tracks of dinosaurs and other animals that lived in Alaska during the Cretaceous Period. Now that we have found bones, we have another way to understand the dinosaurs that lived here 70 million years ago.”

The research team found four different fragments, including one ossified tendon. The largest is a few inches long. They are clearly parts of bigger bones from a large animal. This rules out other animals with a backbone known from this geological period, including mammals, birds and even flying reptiles. Because they are parts of much bigger bones, Druckenmiller expects more complete remains may be found in the park.

“Finding these bones opens a new chapter in the story of Denali dinosaurs,” he said. “That story is still being written as we find new sites, new kinds of dinosaurs and evidence of their behavior.”

Before 2005, there was no known dinosaur record in Denali. That year, UAF students discovered the first track in the Cantwell Formation near Igloo Creek. Since then paleontologists have catalogued thousands of tracks. Still, this is the first time scientists have found identifiable bones left by animals that populated the area during the Late Cretaceous Period.

“We now know that it protects an ancient ecosystem, as well,” Capps said. “Visitors could discover a fresh bear track next to a 70-million-year-old dinosaur track or potentially even a bone. Thankfully, these resources are protected within the Denali wilderness for all to enjoy.”

Heather MacFarlane, a UA Museum of the North research assistant, discovered the first bone. She and other researchers recognized the fragments as bones rather than sedimentary material based on the surface and internal structure. These fossils closely resemble other plant-eating dinosaur bones found in Alaska.

Paleontologist Cassi Knight, physical science technician for Denali National Park, was with MacFarlane when the discovery was made.

“It is significant because it answers a question that has been standing for the past 11 years; ‘Are there dinosaur bones preserved in the Cantwell Formation?'” Knight said. “We have a great record of dinosaurs inhabiting this area, and now we finally know that their bones are preserved, too.”

Gregory Erickson, a Florida State University researcher who specializes in the use of bone and tooth histology to interpret the paleobiology of dinosaurs, was also part of the discovery team. He is preparing thin sections of some of the fossils. Scientists can examine these delicate slices under high-powered microscopes to determine the type of animal that left the bones behind. Annual growth lines and other patterns can also reveal the animal’s age.

Based on the shape and structure of the fossilized tendon discovered by the team, Erickson and Druckenmiller determined that it is from a large ornithopod dinosaur, probably a hadrosaur. These duck-billed, herbivorous dinosaurs were probably the most abundant large animals in Alaska. They were also the primary track-makers in the park during this time period.

Another larger fragment is composed of spongy bone originating from the end of a large animal’s limb. This microstructure shows the bone didn’t come from a crocodile or other slow-growing, cold-blooded animal. It is clearly from a medium-sized to large dinosaur, they said.

Druckenmiller and Erickson previously published documentation suggesting that during this time period, a distinct, polar fauna existed in what is now Alaska. Then, a polar forest covered the Arctic because the climate was much warmer. The dinosaurs had to contend with months of winter darkness and cooler temperatures than environments typically associated with dinosaurs.