Greenland ice loss has sped up drastically since 2003 • Earth.com 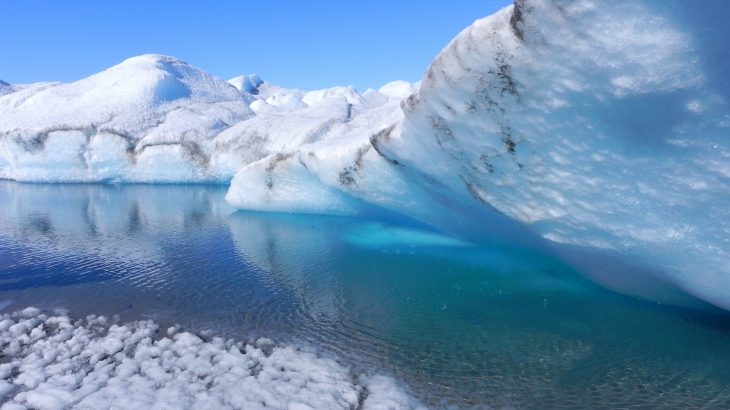 Greenland ice loss has sped up drastically since 2003

Greenland ice loss has long been one of the biggest drivers of sea level rise worldwide, and between 2002 and 2016, Greenland lost around 280 gigatons of ice each year.

Researchers have pointed to the massive iceberg-size chunks that routinely fell from glaciers in the southeast and northwest regions of the island that floated out into the Atlantic Ocean and melted as the main culprits. But now, a new study has found that this isn’t the case.

Not only is Greenland melting faster than realized, but researchers from Ohio State University discovered that ice loss was more significant in the southwest region of the island, a long-overlooked area without glaciers, between 2003 and 2013.

The results of the study show that climate change will further speed up Greenland ice loss in the southwest area which will also lead to faster sea level rise.

“Whatever this was, it couldn’t be explained by glaciers, because there aren’t many there,” said Michael Bevis, the lead author of the paper. “It had to be the surface mass–the ice was melting inland from the coastline.”

Instead of icebergs calved from glaciers, the researchers realized that meltwater rivers and streams that flowed into the ocean had a much more significant impact on Greenland’s overall ice loss over the years.

“We knew we had one big problem with increasing rates of ice discharge by some large outlet glaciers,” said Bevis. “But now we recognize a second serious problem: Increasingly, large amounts of ice mass are going to leave as meltwater, as rivers that flow into the sea.”

For the study, the researchers analyzed data from the Gravity Recovery and Climate Experiment (GRACE) which is a collaborative monitoring project led by the National Aeronautics and Space Administration (NASA) and Germany which measured Greenland ice loss with satellites.

The researchers also examined records from GPS stations placed along Greenland’s coast and identified worrying ice loss trends. Between 2002 and 2016, Greenland ice loss contributed to about .03 inches of sea level rise per year, but the rates of ice loss were not steady.

By 2012, the data showed the rate of ice loss had quadrupled compared to 2003, and the largest ice losses came from the southwestern region of Greenland.

Bevis and his team linked the increases in melting to changes in the North Atlantic Oscillation and global atmospheric warming which help speed up summer melting inland.

“These oscillations have been happening forever,” said Bevis. “So why only now are they causing this massive melt? It’s because the atmosphere is, at its baseline, warmer. The transient warming driven by the North Atlantic Oscillation was riding on top of more sustained, global warming.”

There’s no going back now, according to the researchers. Climate change has already firmly set in place an irreversible pattern of Greenland ice loss and sea level rise.

“The only thing we can do is adapt and mitigate further global warming–it’s too late for there to be no effect,” said Bevis. “This is going to cause additional sea level rise. We are watching the ice sheet hit a tipping point.”