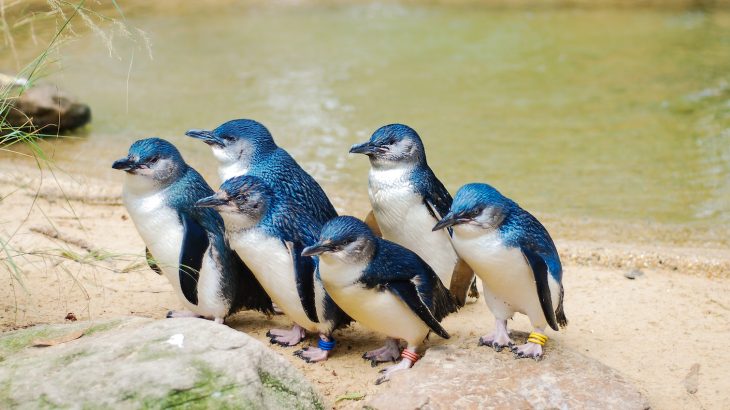 Years ago, on a cold night in the austral winter, I stood on a beach watching. Eventually the cold drove me back to my rental car to huddle in the interior and try to warm up for a while. When I felt warm again, I returned and started down a steep path towards the beach but as I walked, I saw a small creature startle and stumble backwards, tripping over itself. I stopped. I wanted to call out for the animal to wait, I was no harm but it was no use, I’d scared away the little bird I’d been waiting to see.

I was in Tasmania and the bird I’d scared away was the little blue penguin (Eudyptula minor), also known as the fairy penguin.

The fairy penguin is the world’s smallest penguin and the only one to visit Tasmania. The tiny penguin spends its days hunting for fish only to return after sundown to the land and a safe burrow where often a hungry chick waits. Unfortunately, like many of Australia’s wild animals, the fairy penguin has a population in decline.

Middle Island is an interesting place off the coast of southern Australia in Victoria near the town of Warrnambool. The island is quite small and rocky, if also beautiful. The relatively remote island seemed a perfect place to quietly harbor a population of penguins. Unfortunately, like other parts of Australia, foxes were introduced to Middle Island and wreaked havoc on the fairy penguin population. A penguin population of 800 was reduced to only 4 found by scientists due to foxes and incautious trampling of their burrows, according to BBC. In the biggest kill, 360 penguins were found dead from foxes, not for food but apparently for the thrill of killing.

The European Red Fox (Vulpes vulpes) was introduced to Australia in the 1800s by sport hunters, according to the Australian government. Within a hundred years, the clever fox had spread across the whole continent on their own. The unique geography of Middle Island allows the curious fox to cross from mainland Australia to the island at low tide with only a short swim. A natural build up of sand by sea currents slowly made the island more accessible. It was only a matter of time before foxes inhabited the fragile island and endangered its ecosystem.

The solution taken up by most wildlife managers throughout Australia is to wage an all out war on foxes. Despite hunting, poisoning and trapping foxes, their numbers seem strong. According to a report form ABC in 2018, foxes inhabit about two thirds of southern Australia. In one culling event, 701 foxes were killed in just two nights.

Despite the slaughter and range of weapons available to humans, only Tasmania, an island state, successfully eradicated foxes. In fact, sometimes poisons meant for foxes kill dingos, one of the few Australian animals that actually competes with foxes and naturally curtails their populations. According to Scientific American, areas in Australia where dingos have been poisoned (on purpose) have more herbivore species like kangaroos but also more foxes. Beyond that, more grazing from kangaroos and wallabies reduced the amount of ground cover for small mammals to hide in, making them easier prey for foxes.

Fencing has also been used as a method to control foxes in Australia and proven to be useful but it could also potentially impact native wildlife as well. With very few successes to learn from in fox control or protecting wildlife from them, conservationists working on Middle Island tried something novel to protect the fairy penguins.

The maremma is a large, white fluffy breed of dog. Maremmas are an Italian breed, originally bred to guard sheep from the likes of wolves and bears. Interestingly, maremmas have been used to guard other animals as well, such as chickens. A chicken farmer with the eccentric name of Swampy Marsh suggested using one of his maremma guard dogs named Oddball to protect the penguins. Immediate success in penguin protection was realized with the introduction of Oddball and since that first trial more than 10 years ago, more maremma guard dogs have been used to protect the penguins. When the dogs have been on duty, they were amazingly effective, with no penguins killed under their watch. The penguin population flourished and rose to 200 birds. An adorable fictionalized movie about the penguins and Oddball was made in 2015, boosting tourism to the area. Unfortunately, this is only part of the story.

ABC reported in 2017 that 70 penguins were killed, mostly eaten by a fox attack on Middle Island. This comes at a time when the penguin population was at 182 birds, a large growth from its low point but still devastated by a loss of 70. The maremmas had been off duty because of rough tides and bad weather. It was assumed that the conditions made the island impossible to access for foxes as well, unfortunately the conservationists learned they were wrong the hard way.

Now, maremma dogs and volunteers will always be either on the island or the beach in front of it to keep foxes at bay. Despite the recent setback, the maremma program is a success in showing that non-lethal predator control can sometimes be more effective at protecting populations of native wildlife. It’s truly astonishing that guard dogs can protect penguins from foxes better than snipers, poisons and traps. For those who are interested, tourists can even meet the maremma dogs on educational tours and support penguin conservation.