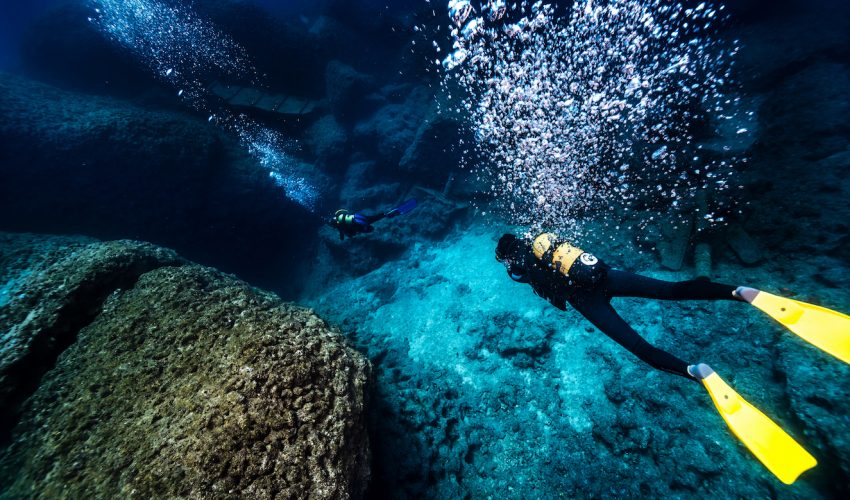 Many studies have been done on the effects that noise pollution from boats and large ships in our ocean may have on marine life. Species ranging from whales and dolphins to small fish can have their hunting abilities and communication patterns disturbed by the noise created underwater by our ocean-faring vessels. But what about the smaller disturbances we may present, such as activities like swimming, scuba diving, and kayaking?

“Humans generate underwater noise the moment we take to the water,” says Erbe. “Many people don’t realize that sound travels extremely well and far underwater — we can hear individual ships tens to hundreds of kilometers away. And when we’re out on the ocean, we can hear ships coming long before we finally see them appear on the horizon.”

Marine animals rely on sound for all of their major life functions, such as foraging, mating, and moving from place to place. To study how our activities may appear to animals underwater, Erbe deployed hydrophones – which are underwater microphones – to record the sound of people swimming in a pool.

“Thanks to simultaneous underwater video and audio recordings, we were able to match specific sounds with activities – including different swimming styles, diving, kayaking and scuba diving,” Erbe explains. “It turns out, most of the sound is related to bubbles that we generate at the water’s surface. Every time your arms pierce the surface while swimming freestyle, you push a bubble cloud underwater, which vibrates and sends out an acoustic wave.”

The researchers found that swimming breaststroke was the quietest way for participants to move about. After a while, they were even able to tell which participants swam which style – just by listening to the sounds.

“Some of us use much more force in swimming than others,” says Erbe. “For example, some swimmers exerted more energy vertically downward – pushing huge and noisy bubble clouds underwater, while other swimmers used their energy more in a forward-propelling sense and created much less bubble noise vertically below them.

When determining the noises made by kayaking, they found that the water falling off the edge of each paddle created a high-frequency dripping sound underwater, which was easily recognizable. “Scuba divers also create an alternating pattern of breathing in and out, which is clearly distinguishable underwater,” Erbe says.

Ultimately, the researchers determined that sounds from non-motorized water sports are unlikely to cause any harm to marine animals. But they want you to know that – although you may not be able to see them – marine animals are able to hear you.