Human-animal partnerships can be mutually beneficial in the wild • Earth.com 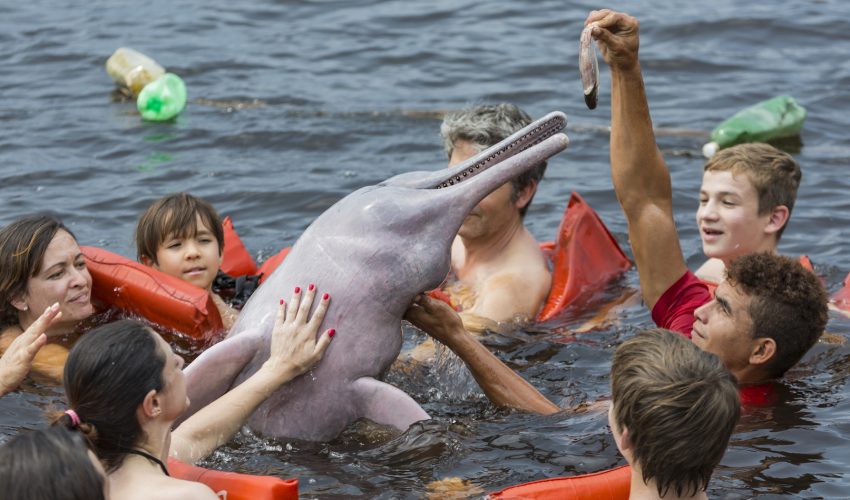 Human-animal partnerships can be mutually beneficial in the wild

The ability to communicate or even form friendships with wild animals is the secret dream of many humans.  Upon looking at our literature and movies, animal-human partnerships become an a common theme. The Jungle Book by Rudyard Kipling is perhaps the most obvious example, unless it’s Tarzan of the Apes by Edgar Rice Burroughs.  Of course, both pieces of literature have been adapted to film numerous times and take their place next to parodies such as George of the Jungle.  Less related to wild creatures but no less symptomatic to a desire for closeness to animals are classics such as Dr. Doolittle and Mr. Popper’s Penguins, again both as literature and film.

Is there some reality behind these pieces of pop-culture or is it all just so much fantasy?  We all know of the strong bond that can be formed between people and domestic animals such as cats and dogs.  Many people are quick to cite examples of cats rescuing family members by waking them to a fire or dogs that mourned the death of owners for years.  Are there clear examples of humans forming lasting partnerships with wild animals that remain wild though? Actually, there are a few examples of humans partnering with wild creatures for the mutual benefit of both.

There are legends in South America among natives and persisting among Caboclos about river dolphins becoming human, eerily similar to Celtic myths of Selkies, seals who could transform into humans.  In the dolphin myths sometimes, mysterious pregnancies are explained by dolphins, in cases where a woman’s husband has been away. Some Amazon rainforest natives play games with river dolphins, tagging them with canoe paddles.  The games are interesting in that both dolphins and humans seem to understand and cooperate for nothing more than amusement. Amazon River dolphins, locally called Botos, are also considered guardians of river manatees and can whisk swimmers away to magical underwater realms.  It’s not surprising that many groups consider eating dolphins or killing them to be taboo.

The relationship between dolphins and humans in South America is surpassed by the cooperation between traditional fishermen in Myanmar and the Irrawaddy dolphins.  Irrawaddy dolphins aren’t strictly river dolphins but evolved to tolerate a wide range of salinity from the ocean along the coast to farther up brackish rivers. The Irrawaddy dolphin is represented by several sub-species scattered throughout southeast Asia as far as the northern coast of Australia.

Fishermen in Myanmar tap sticks in rhythm along the sides of their canoes and mimic the sounds dolphins themselves make.  The dolphins take note and cooperate by herding fish into the fishermen’s waiting nets. Without the nets to push prey into, the dolphins may not be able to catch fish as efficiently, conversely the dolphin’s help significantly increases the success of fishermen.  When the fish are hauled into boats, the dolphins are rewarded with some of the fish they helped catch being tossed back by fishermen. There are stories of dolphins waking fishermen that fell asleep in their boats, encouraging them to help fish. Irrawaddy dolphins are in decline though, and so is asking their help in fishing.

In an article in Mongabay.com last year, a fisherman told a reporter that all the dolphins he and others named are now dead.  Part of the cause of decline is the illegal practice of electrocuting fish with car batteries for a quick return.  Growing populations, increased overall strain on ocean habitats and pollution don’t do Irrawaddy dolphins any favors either.

There are unconfirmed reports of bottlenose dolphins in Laguna Brazil helping fishermen in much the same way as the Irrawaddy dolphins, perhaps the phenomena is more widespread than believed.

In Africa, a different search for food takes place.  A bird called the Greater Honey Guide is keenly efficient at finding wild honey.  The Yao culture of Northern Mozambique among other peoples has taken notice of the bird’s ability.  The Honey Guide itself is happy to share the honey as the bird is really interested in eating bee larvae and in getting help to open hives and sedate angry bees with smoke.  The Yao people make a buzzing noise to call in the Greater Honey Guide, indicating they are ready to hunt for honey and the bird appears (most of the time) to help. Sometimes birds also seek out people, with specific flight pattern and call behavior indicating honey is nearby.  The relationship between different groups of Africans and honey guides was first documented in the 1500’s but it’s likely much older, a mutualism imbedded in the genes of Honey Guides.

A loss of the honey guide-human interaction is slowly occurring as more people turn to agricultural lifestyles and raise their own bees.  National parks in Africa have also excluded native peoples, where Honey Guides sometimes try to enlist the help of unwitting tourists. Honey guides at least haven’t put all their eggs in one basket; Honey Badgers (famous on Youtube) also work with honey guides, following the birds to rich hives and breaking into them.

With our history of domestication and close contact with many other animals, it wouldn’t be surprising if there were many more relationships like these buried in the history of humanity.  Maybe even now, ‘uncontacted’ tribes in South America or Asia have other animals helping them. Maybe we could learn to reach out to other species as true partners not just competitors or slaves.  After all, we are but one species and we need all the friends we can get.