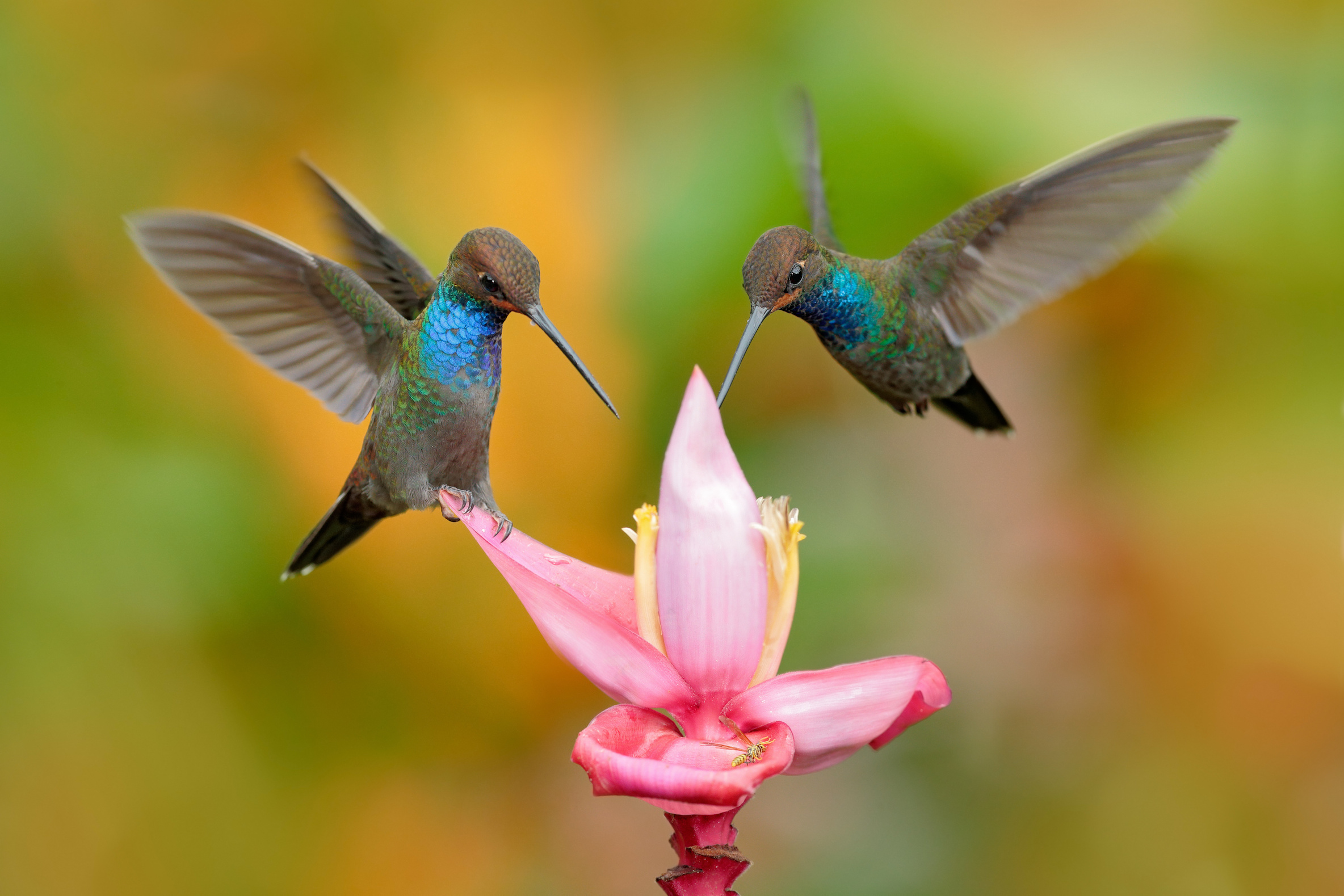 A skylight above where I was working with dinosaur bone casts buzzed with movement. At first I assumed that an insect had strayed inside the workshop building with the summer breeze through the open doors. Looking closer I saw bright, metallic feathers. A hummingbird was flying desperately against the square of sun and sky set in glass above me. I looked around hoping to find a way to rescue the bird, not knowing exactly how to help. The hummingbird became more exhausted then I’ve ever seen another of his kind. The bird paused, sitting on the lip below the skylight, wings drooped and then flew against the glass, only to collapse again on his perch. I walked into the other room of the workshop and found an insect net leaning against the wall, undoubtedly to remove unwanted arthropods without killing them. Carefully I climbed up a ladder and quickly scooped the tiny bird into the net. I moved as fast as possible towards the door and opened the net outside, smiling as the hummingbird zipped away past the surrounding bushes.

Hummingbirds are a common sight in Western Colorado where I once lived but are easy to miss, zipping by before many notice them. I’m sure most Colorado residents would be greatly surprised to learn that as many as 12 species have been found in there state. Hummingbirds would surprise many by where they are and aren’t. Most people think of hummingbirds as exotic tropical animals but they’ve been found in every US State –except Hawaii. Hummingbirds.net reports 4 species for Alaska and only three species in New York. The New York Times reported the paradox of finding more hummingbirds in highly populated parts of New York, where city parks and potted plants attract them than in more rural areas.

Still, the tropics are great places to encounter hummingbirds. I first saw a hummingbird nest sewn with spider silk onto the back of a leaf by a female Hermit hummingbird in the lowland rainforest of Ecuador (subfamily Phaethornithinae). In Jamaica I sat in a bird reserve holding a tiny bottle of sugar water in my hand while the delicately feathered swallow tailed hummingbird (Trochilus Polytmus) ate from it. In the Bahamas while collecting data on parrots, I occasionally saw the buzzing rush of a passing Bahama Woodstar (Calliphlox evelynae).

Later Erin, my girlfriend, and I spent three months as volunteer managers at a nature reserve in Ecuador, where part of our duties was monitoring hummingbirds. Every day we sat by hummingbird feeders and tallied up the visitors. The first few days collecting data on hummingbirds was overwhelming. For the research we had to mark the number and sex of each hummingbird visiting the feeders hung on the porch. We were baffled; Is that a male Brown Violet Ear or a Female White Necked Jacobin? Time with the birds and checking ourselves against the bird books brought more knowledge and finally some confidence. Soon we could sit eating our eggs and toast, sipping coffee and eyeing visiting hummingbirds as if they were old friends. It was in Ecuador that I learned some peculiarities about hummingbirds, not only is there an enormous diversity of hummers, there are more species in the Andes than in the Amazon rainforest. This pattern of diversity is opposite of most other organisms in South America with some exceptions, including moss, which is most diverse in higher elevation cloud forests.

A visiting European professor told us with pride of an Andean hummingbird that drops its heartbeat into a slow torpor every night to survive the horrible cold of the montane environment. Male hummingbirds compete in lekking dances to compete for females but do nothing to help in rearing the young they spawn. Female hummingbirds with babies collect more insects and less nectar to provide proper nutrition for their chicks.

I’ve watched videos of the Sword-Billed Hummingbird feeding chicks, the chicks look like carnival sword swallowers. My own videos of hummingbirds have been disappointing. Photos are small, lacking the dynamic color of moving birds, disappointing. Even seeing a Hummingbird for long unaided in the wild is a rare treat, which is why feeders are so often used. A visiting biology student from Italy told us he liked everything at the reserve except the feeders; he had a point. An old manager’s journal entry told how previous managers had left the feeders unattended for two days because of a minor emergency. Upon return, the managers found the hummingbirds lethargic, hanging around the feeders but with less speed.

In the mornings, the hummingbirds, eager to be fed would dive bomb us. Flying close with angry needle sharp beaks, they threatened, demanding sugar water. The Yellowstone Grizzly Bears come to mind. In recent history the bears fed from dumps in Yellowstone National Park. The close association between food and humans in ursine minds made the bears a dangerous nuisance. Bears were shot. Tourists were mauled. Yellowstone no longer allows bear feeding or unguarded trash. But, hummingbirds aren’t bears.

Reaching the nature reserve required a hike through forest along a muddy trail that could collapse or dissolve in a heavy rain. Puddles were everywhere, logs and rocks were laid as stepping stones through standing water. Vines, fallen branches, palm fronds covered, blocked, framed the trail. On one hike we heard a buzz of sound. Next to the trail hovered a bird we knew from books but a bird that never visited the feeders. Long thin tail feathers flared out at the end. A male Booted Racquet-Tail danced in the dappled sunlight for a moment. The hummingbird zipped away and were left in the mud, smiling.