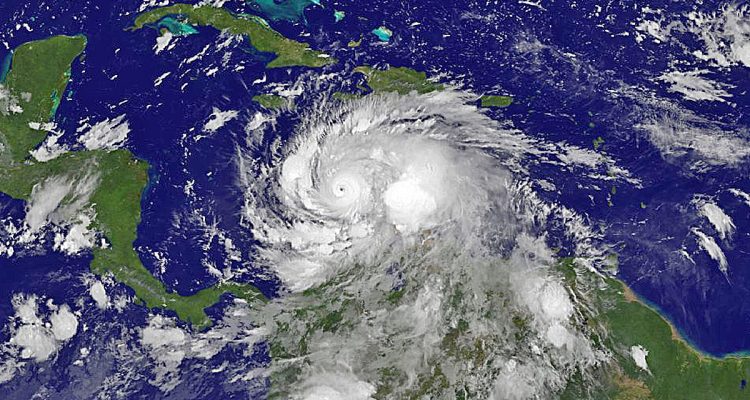 Hurricane Matthew barrels through the Caribbean

On Oct. 2, many watches and warnings were in effect as Matthew moves to the northwest. A Hurricane Warning is in effect for Jamaica, Haiti, the Cuban provinces of Guantanamo, Santiago de Cuba, Holguin, Granma, and Las Tunas. A Hurricane Watch is in effect for Cuban province of Camaguey;  Southeastern Bahamas, including the Inaguas, Mayaguana, Acklins, Crooked Island, Long Cay, and Ragged Island and the Turks and Caicos Islands.

At 8 a.m. EDT (1200 UTC), the center of Hurricane Matthew was located near latitude 14.1 North, longitude 74.3 West.  Matthew is moving toward the northwest near 5 mph (7 kph).  This general motion is expected to continue today, followed by a turn toward the north tonight.  On the forecast track, the center of Matthew will approach southwestern Haiti and Jamaica on Monday, Oct. 4

NOAA’s National Hurricane Center (NHC) said, Matthew’s maximum sustained winds were near 150 mph (240 kph) with higher gusts.  Matthew is a category 4 hurricane on the Saffir-Simpson Hurricane Wind Scale.  Some fluctuations in intensity are possible during the next couple of days, but Matthew is expected to remain a powerful hurricane through Monday night.