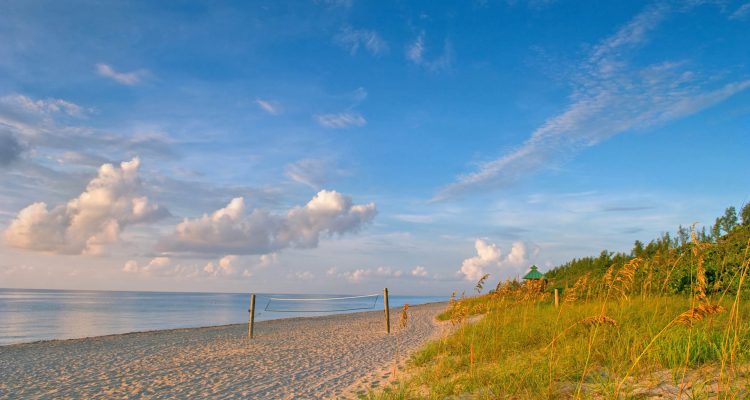 When Christa Savva returned to the Sandy Shoes Beach Resort a day after Hurricane Matthew brushed by Melbourne Beach, Florida, she looked at the beach in front of the pink-flamingo-colored hotel and noticed half the sand dunes had disappeared.

Savva guesses three-quarters of the missing dunes washed into the ocean and the remaining quarter scattered onto the resort’s beachfront property, which was undamaged by the hurricane.

“I was like, ‘Oh, my goodness!'” Savva, a property manager for the Space-Age-era hotel, said Sunday. “It’s crazy to have the dunes gone and all you see is empty space.”

The sand dunes on Florida’s beaches are the equivalent of tourism gold, and its disappearance over time threatens the state’s No. 1 industry. While Hurricane Matthew didn’t ravage Florida’s coast as a series of storms did a dozen years ago, it collapsed dunes, washing away sand that protected buildings and roads during storms, and will likely require the spending of millions of dollars on beach restoration projects.

In Jacksonville Beach, the top of the dunes collapsed onto the lower part of the dunes, creating 10-foot high cliffs of sand, rather than the usual gentle slopes of the dunes.

Federal, state and local officials respond to beach erosion by depositing new sand in areas where it has disappeared, and the sand dunes act as barriers to infrastructure. Before these projects took off three decades ago, sea walls were often the only thing that stood between water, winds and buildings during storms.

“The good news is a lot of people don’t realize our beaches are engineered. It looks natural, but we construct the sand so it’s sacrificed during hurricanes and protects roads and structures and potentially human lives,” said Jackie Keiser, a Jacksonville-area official with the U.S. Army Corps of Engineers.

While a statewide evaluation of beach erosion has yet to be completed, individual Atlantic-coast counties from south of the Space Coast up to the Georgia border were assessing the lost sand.

A $13.5 million project to replenish Jacksonville-area beaches with 650,000 thousand cubic yards of sand over seven miles was underway before Hurricane Matthew. Keiser said she is certain that same amount of sand was lost from the hurricane and the amount of sand needed for the project will likely double.

Virginia Barker, the natural resources director for Brevard County, the area of Florida often referred to as the Space Coast, said the erosion from Hurricane Matthew appears to be more in the category of Hurricane Sandy in 2012 than a devastating series of hurricanes of 2004 and 2005. After Sandy, 2.4 million cubic yards of sand were needed to replenish 14 miles of Brevard County’s shoreline. The replenishment was far smaller than what was required after Hurricane Frances and Hurricane Jeanne made landfall just south of the Space Coast a dozen years ago.

“This is world-famous Cocoa Beach. People come here for the sandy experience,” Barker said. “It’s tremendously important to our economy. The alternative is to allow erosion and let the sea go up and there will be no sandy beach.”

In Georgia, it’s too early to tell the extent of beach erosion, but water did get past huge boulders placed along the shore to buffer properties and stop erosion, said Megan Desrosiers, CEO of One Hundred Miles, a Georgia coastal advocacy group.

“The thing about Georgia is, we haven’t had a storm like this since the 1880s so it’s hard to know how to prepare when no one remembers the last time there was a storm like this,” Desrosiers said. “We don’t have experience with this type of storm on the Georgia coast, but Matthew was a perfect example of what we will see more of in the future.”

Before Hurricane Matthew, more than half of Florida’s 663 miles of beaches were considered critically eroded by the state Department of Environmental Protection. The agency defines “critical erosion” as the disappearance of beach or dune to a degree that it affects the environment, development or recreational activities. About half of Florida’s 411 miles of beaches deemed to have “critical erosion” are part of a beach replenishment program.

In Melbourne Beach, now that half of the dunes are gone in front of the Sandy Shoes, the high tide can lap up to the steps that lead to the hotel’s wooden deck overlooking the beach.

“There’s still a beach, and everything … but it’s just a lot flatter,” Savva said. “High tide is something you’re going to have to watch out for now.”