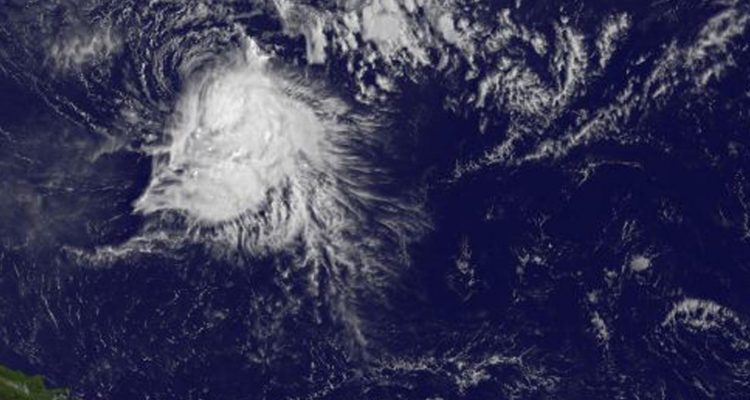 Byadmin
Earth.com staff writer
Tropical Storm Nicole intensified into a hurricane to join Matthew in the Atlantic Ocean, and together they set a record.

On Oct. 6 at 2 p.m. EDT Nicole strengthen into a hurricane. By 11 p.m. EDT Nicole reached maximum intensity with maximum sustained winds near 105 mph. As Hurricane Matthew’s winds were near 120 mph at the time Nicole peaked, it marked the latest in the calendar year that two storms in the North Atlantic Ocean have had winds over 105 mph simultaneously, according to Joe Munchak, research scientist at NASA’s Goddard Space Flight Center in Greenbelt, Maryland.

Since that time, vertical wind shear has been affecting the storm and it weakened. At 5 a.m. EDT on Oct. 7, the National Hurricane Center (NHC) said “Nicole no longer has an eye in infrared satellite imagery, and the cloud pattern suggests that 30 knots of northwesterly shear is beginning to offset the deep convection to the southeast of the center.”

A visible image of Hurricane Nicole in the Atlantic Ocean taken by NOAA’s GOES-East satellite on Oct. 7 at 7:45 a.m. EDT shows clouds being pushed away from the center by vertical wind shear. NOAA manages the GOES satellites and the NASA/NOAA GOES Project at NASA’s Goddard Space Flight Center in Greenbelt, Maryland used the data to create the image.

At 5 a.m. (0900 UTC), the center of Hurricane Nicole was located near 27.3 degrees north latitude and 65.2 degrees west longitude. That’s about 345 miles (555 km) south of Bermuda. Nicole is drifting southward, and a slightly faster southward motion is expected tonight and on Saturday, Oct. 8.

NHC noted that Maximum sustained winds have decreased to near 100 mph (155 kph) with higher gusts. Additional weakening is forecast during the next 48 hours. The estimated minimum central pressure is 970 millibars.

Swells associated with Nicole, along with rough surf conditions, will affect Bermuda for the next few days.