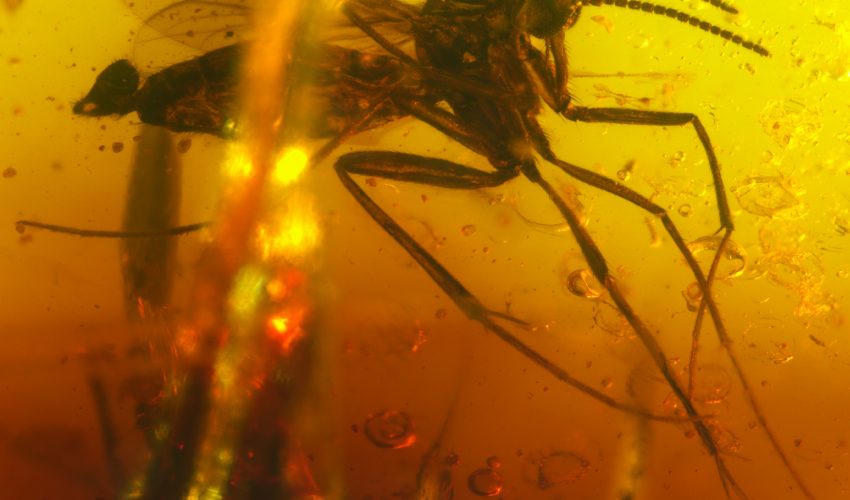 Approximately 130 million years ago, India split off from the supercontinent Gondwana. It drifted north – moving at a rate of approximately 15 centimeters a year. Eventually, India collided with Asia and formed the Himalayan Mountains. This collision also buried Cambay amber that is giving scientists incredible new insight into the mystery of India’s drift.

Embedded in the 54 million-year-old Indian amber are the fossils of three new species of fungus gnats. The newly-discovered insects are closely related to fossils found in Europe. In fact, the fossils in the Cambay amber have a striking resemblance to their relatives encased in the European Baltic amber.

The long-beaked fungus gnats, or Lygistorrhinidae, have been previously  identified in the younger Baltic amber. These tiny tropical flies are extremely rare, and only two species of the insects were preserved in the Baltic amber. The unearthing of three species in the Indian amber are an unprecedented find.

The significance of this discovery is that it may disprove the theory that India became an isolated subcontinent after it drifted. This and other faunal connections to Europe suggest India was not a solitary island.

Exactly how the insects were exchanged is unclear, but experts theorize there may have been an island chain linking Europe and India.

The biodiversity of early India is not very well documented. The study, published in Peerj, sheds new light on the origin of India’s insects which could lead to a better understanding of the country’s geological evolution.