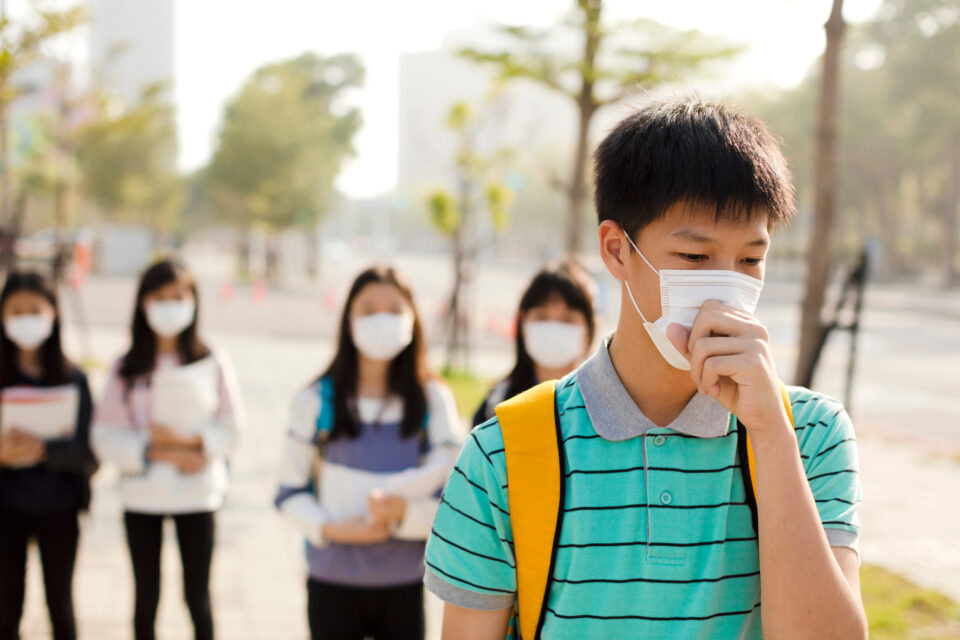 The negative effects of breathing polluted air are well known for adults. Inhaling polluted air has been associated with increased risk of heart attacks, strokes and arrhythmias, and the development of atherosclerosis, the build-up of fatty deposits inside the arteries. Although there are many chemical components to polluted air, experts are especially concerned about the levels of fine particulate matter (PM2.5) because it can be drawn deeply into the lungs and even enter the bloodstream.

According to new research published in the Journal of the American Heart Association, polluted air may have a negative effect on the heart health of teenagers as well. The study examined the impact of inhaling fine particulate matter on the heart rhythms of adolescents and found that this form of air pollution may trigger irregular heart rhythms (arrhythmias) in healthy teenagers.

“While relatively rare, irregular heart rhythms can lead to sudden cardiac death in otherwise healthy adolescents and young adults. Our findings linking air pollution to irregular heart rhythms suggest that particulate matter may contribute to the risk of sudden cardiac death among youth,” said study lead author Dr. Fan He, an instructor at the Penn State College of Medicine in Hershey, Pennsylvania.

“Since childhood and adolescent cardiovascular conditions can track into adulthood and affect risk of major cardiovascular disease later in life, identifying modifiable risk factors of cardiac arrhythmia that may cause sudden cardiac death among adolescents should be of great public interest.”

Fine particulates (PM2.5) are tiny particles less than 2.5 microns in size. They derive from the combustion of fuel and from wildfires and, when inhaled deeply, can enter the blood stream. These particles irritate the lungs and blood vessels around the heart and may, over time, increase the risk of disease in the arteries.

The investigators analyzed the impact of breathing PM2.5 pollution on two types of irregular heart rhythms in adolescent participants. Arrhythmia is characterized by premature contraction in the heart muscle, often described as a “skipped heart beat,” but this condition can originate in either the top chambers (atria) or bottom chambers (ventricles) of the heart.

In premature atrial contractions (PACs), the abnormal heart beat usually causes no symptoms or harm, although frequent premature atrial contractions have been related to an increased risk of atrial fibrillation – a severe form of arrhythmia in which the top chambers quiver instead of beating effectively, thereby raising the risk of blood clots and strokes. Premature ventricular contractions (PVCs) are more serious and raise the risk of later heart attacks, strokes, heart failure or sudden cardiac death.

The children in this group were free of major cardiovascular conditions at the start of the study and were considered at low risk for irregular heart rhythms. In the follow-up study, the researchers simultaneously measured exposure to fine particulate matter in the air each teen breathed (using a device called a nephelometer) for 24 hours, and took EKG tracings of each teen’s heart rhythms via a small wearable device called a Holter monitor.

Data collected during the study showed that the average PM2.5 concentration recorded in the air around the participants was approximately 17 micrograms per cubic meter of air (µg/m3) per day, which is well-below the health-based air quality standard of 35 µg/m3/day established by the U.S. Environmental Protection Agency (EPA).

In addition, although no association was found between the concentration of fine particulate matter and the number of premature atrial contractions, there was a link between premature ventricular contractions and the levels of PM2.5 . The researchers found an increase of 5 percent in the number of PVCs for each 10 µg/m3 increase in PM2.5. This result was recorded within two hours of exposure to higher levels of particulate matter in the air.

“Our study found that air pollution increases the risk of cardiovascular diseases and sudden cardiac death, even among healthy adolescents,” said Dr. He. “Protective measures, such as wearing masks and avoiding vigorous physical activities, may be warranted on days that particulate matter concentration is high, especially during early morning rush hours.”

“It is alarming that we were able to observe such a significant impact of air pollution on cardiac arrhythmias when the air quality remained well within the health-based standards established by the EPA. It may suggest that adolescents who live in highly polluted areas such as inner cities are at even higher risk.”

The results were consistent with data previously obtained for adults, using similar methods, although the increase in premature ventricular contractions was even higher in adults. The researchers propose that reducing the risk of irregular heart rhythms in adolescents may reduce their risk of developing heart disease as adults.

“PM2.5 levels have fallen dramatically since the 1970s–80s due to regulations that have been unquestionably linked to improved health effects and life expectancy. We outlined, in a recent AHA scientific statement titled Personal-Level Protective Actions Against Particulate Matter Air Pollution Exposure, strategies and activity or behavioral changes that may reduce pollution exposure, such as portable air cleaners, facemasks, respirators and exercising during non-peak hours. However, there have been no studies to show these measures can actually prevent adverse clinical health effects such as heart attacks.”

According to a 2020 American Heart Association policy statement, ambient air pollution is widely recognized as a significant contributor to cardiovascular disease and death. In 2017, exposure to particulate air pollution was estimated to be associated with more than 7 million premature deaths and the loss of 147 million healthy life-years globally. The Association recommends further development of evidence-based policy approaches, continued investment in research and greater innovation and transformational partnerships to reduce the cardiovascular burden of ambient air pollutants in the U.S.

“The most interesting and significant aspect of this study is clearly that the results were found in healthy young adolescents,” said Dr. Brook. “The study adds support for the concern that even healthy young people are not immune to adverse cardiovascular responses to PM2.5 and at exposure levels within National Ambient Air Quality Standards for 24 hours, established by the EPA. It is plausible that the findings help explain the potential reason for the time of onset of arrhythmias and even sudden death in some susceptible young people.”

Dr. He and colleagues are currently evaluating the impact of air pollution on other markers of cardiac electrical activity.