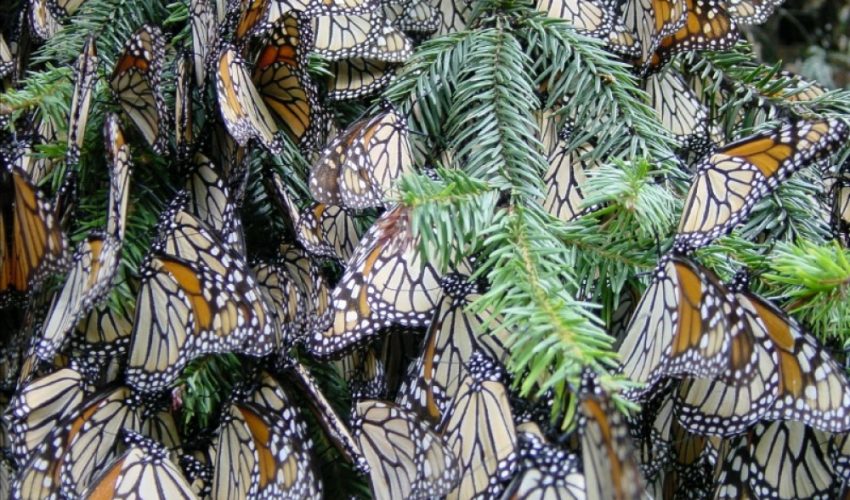 Journey North – a powerful tool for wildlife biologists, climate scientists, teachers and volunteers – grew out of one woman’s exploration of how the internet could be used to collect and store data.

The citizen science program has been helping researchers and volunteers of all ages track seasonal migration since it was founded by Elizabeth Howard in 1994. But while Howard expected the project to be popular, she never thought it would take off the way it has in the 25 years since.

“Because it was such an early project, there was no vision to see where it might go, because there was nothing out there to compare it to,” she said in a phone interview.

Back then, the web was in its infancy, but Journey North took advantage of the new technology. It’s grown as that tech has, too, with each successive website renovation making it easier for scientists, educators and volunteers to enter and access data.

Journey North was always intended to be accessible to the public.

“It’s a very easy entry point,” Howard said. “It’s designed to be simple, with easy-to-recognize species and a minimum investment of time.”

The project tracks several different migratory wildlife species along with plant growth, ice melt and other signs of spring. By bringing in citizen scientists and classrooms all over the world, it creates a huge pool of data for professionals.

At the same time, the volunteers who enter their own data can see how it fits into the bigger picture.

The projects are designed so that budding scientists of all ages – even those with no scientific background – can participate and help professional scientists track the changing of the seasons.

And that’s one of the major goals of Journey North.

Fitting into the classroom

Some collaborative scientific projects can require a lot of background knowledge and effort, Howard said. That can make them seem overwhelming or even exclusive to people who want to help, but aren’t sure how.

Journey North aims to make room for everyone who wants to be involved – from kindergarten classrooms to working adults or retirees who just want to contribute.

“That’s something that we really put a lot of effort into,” Howard said.

It shows, in that a lot of volunteers with Journey North go on to join more complex projects.

There’s a special focus on classroom education, and that’s by design, too. Journey North is funded by Annenberg Learner, a division of the Annenberg Foundation that encourages teacher development and classroom excellence.

Journey North’s projects give students a hands-on look at how science works in the world around them. Students learn to observe the natural world – drawing tulips and leaves, recording temperature measurements, looking for and counting birds and butterflies, and other basics of scientific observation.

Then, when they’ve entered their data, they can see how it connects to their local ecosystem. The patterns they spot in the worldwide data can show them how their neighborhood fits into the bigger picture.

“It’s real-time, it’s real-life, it’s real science. You’ve got things that are happening that are literally outside your back door, yet you can see how you’re connected to the larger ecosystem,” Howard said.

The reporting standards for each project are deliberately kept simple.

For example, Leaf-Out asks citizen scientists to observe and record buds on their chosen tree, and to report to the website once those leaves have reached the size of a U.S. or Canadian quarter.

The website provides access to all that submitted data, with tools that help teachers interpret it, such as interactive maps or printable journal pages to keep track of lessons.

While these contributions seem simple, Howard said, in reality they create a massive collection of data that professional scientists couldn’t gather on their own.

The monarch project is a great example. Because of how the butterflies migrate, their feeding and breeding habits, and their short lifespan, they provide a unique glimpse into how environmental changes can affect an entire species.

During this four-week migration, even small changes have have a massive effect on the butterflies’ population.

One example came in 2012, when the monarch migration period was unseasonably warm. Milkweed grew 600 miles farther north than it usually does, and the butterflies followed it. With the sightings mapped, scientists could look at weather data to see how the warmer temperatures drew the monarchs so far afield.

Other weather patterns have affected the butterflies, but sometimes there’s no one to record them, and data is lost. Citizen scientists help to fill in those gaps, saving the professionals time and gathering data they would otherwise miss out on. All this data is used by scientists to help guide conservation priorities.

And that’s another way teachers can use the projects to teach their students about the real-world applications of science.

Kids can see how the data they’ve helped to collect goes into guiding local and state regulations, or efforts by scientific and conservation organizations to protect and restore wildlife habitat.

“Much of what has been learned about the monarch butterfly and its migration is the result of citizen science projects,” the U.S. Forest Service writes on its website, citing Journey North and several other monarch-watching projects.

The research conducted by Journey North’s enormous team of citizen scientists on monarch butterflies has been cited by the Weather Channel, the Environmental Defense Fund and newspapers all over the U.S. and beyond.

The program works with other citizen science groups as well as professional biologists, climatologists and other researchers.

Over 25 years, Journey North has collected a wealth of scientific data that serves as a piece of a much larger puzzle, along with data collected by other volunteer groups and professional research teams.

Of course, all of that data doesn’t provide easy answers. It still has to be interpreted and analyzed by scientists, and looked at alongside other datasets for a larger picture.

Because the site focuses on spring and fall migrations, spotting patterns becomes a little tricky. Spring is a dynamic time of year when unexpected things can happen, Howard said.

“It’s always so hard to tease out what is a long-term climate change, versus what is a seasonal change,” she said.

Sometimes, population changes in the species Journey North tracks can be traced to a loss of habitat or food sources. Other times, it’s not so simple. A few years ago, a storm during their migration apparently wiped out a huge chunk of the monarch population, but it was one of those events that wasn’t recorded in the data.

Still, over more than two decades, some patterns begin to emerge.

“We see very clearly how a warm spring or a cold spring effects these migration,” Howard said.

While the program hasn’t been collecting data long enough to confirm changing climate trends, the maps and numbers collected by citizen scientists can provide insight into how a trend of warmer or colder springs could affect migratory species.

So will Journey North be adding new projects in the future? Probably not anytime soon, Howard said.

“I think we’re good for right now. It’s important to focus on the ones that we [have],” she said. “We’ve done a lot of trial and error over the past 25 years and we kind of know what works.”

They’d rather provide a rich, excellent source of data on a few innovative projects than lose focus and sacrifice quality.

“Plus it’s really fun to compare one year to the next. That’s where half the interest comes from,” she said.