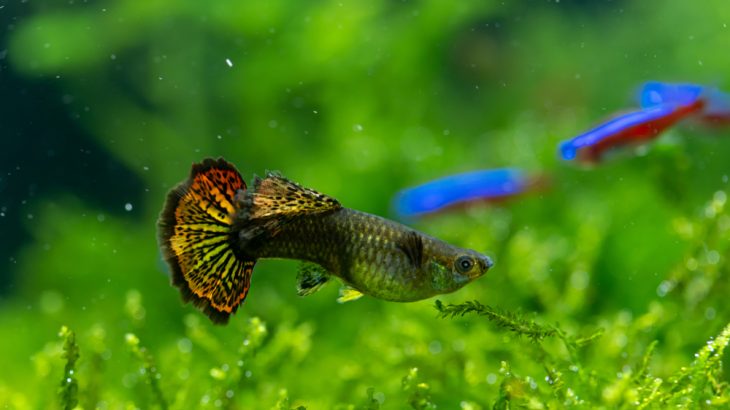 Every species on Earth is constantly adapting and changing – and for many of those species, ladies’ choice guides how they evolve, from mate selection habits to how they raise their young.

Led by Dr. David Reznick of the University of California, Riverside, a team of researchers analyzed guppy DNA and studied how different varieties of the colorful, tiny fish evolved. Their goal was to determine how guppy species with more colorful males differed from their less bright cousins – and why so many of the colorful males’ mates shared a particular pair of reproductive traits.

Reznick said he was inspired to take on the research after browsing the guppy aisle of a pet store.

“The fish I saw that day all belong to the Poeciliidae family, which give birth to live young, rather than lay eggs. Some of them even have placentas, like mammals,” Reznick said in a press release. “The ones offered for sale were only species with colorful males and all of those species had mothers that lack placentas. I wanted to know how having this type of mother might relate to the evolution of male traits.”

He and his team analyzed the data from 170 different species in the Poeciliidae family, creating a sort of genetic family tree. They then mapped out each of the species male and female traits, in hopes they could determine what behaviors direct the evolution of those traits.

They found that the common denominator for many of those traits was, essentially, ladies’ choice.

For example, the guppies without a placenta: They invest more time and physical energy into their young than those without one. The guppies that did have a placenta had more physical control over reproduction, such as the ability to abort eggs they didn’t want or even to control which sperm fertilizes those eggs. But for guppies without one, choice of a mate was more important. Once they choose, there is no going back until the young are ready to go out on their own.

“When mothers lack a placenta, they’ve already invested all they’ve got to give into the eggs prior to fertilization,” Reznick said. “So, the mothers are picky about the males they choose.”

So they tend to choose flashier males.

Those fancy species also tended to evolve and split into new species faster than their plain counterparts, the researchers found. That ladies’ choice is linked to male traits indicates that how mothers choose mates and the investments they make in their young can determine how quickly a species evolves.

The study did confirm a hypothesis first suggested by Drs. David and Jean Zeh at the University of Nevada, Reno: how mothers raise their young influences the evolution of male traits. However, it also debunked their prediction that species with placentas evolve more quickly than those without.

“I wasn’t expecting to learn what we did about these connections between mothering and evolution, but I’m so pleased to have provided here a better understanding of how and why organisms evolve the way they do and how that evolution can affect the formation of new species,” Reznick said.

The study only looked at fish, but Reznick believes their findings can be applied across most of the animal kingdom.