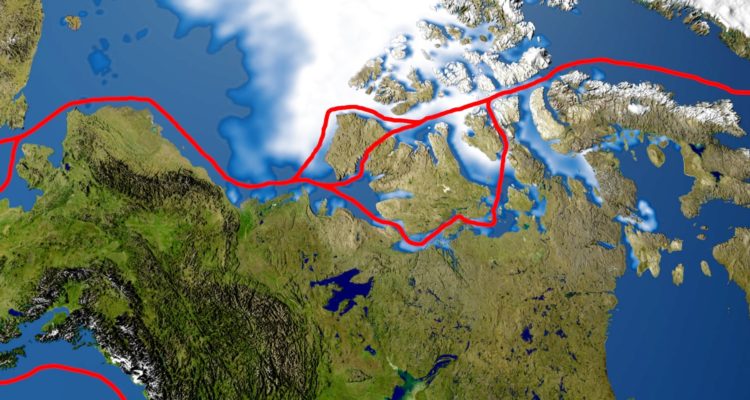 The giant luxury cruise liner was anchored just off Nome, too hulking to use the Bering Sea community’s docks on its inaugural visit.

Instead, its more than 900 passengers piled into small transport boats and motored to shore, where they snapped photos of wild musk oxen, lifted glasses in the town’s colorful bars and nibbled blueberry pie while admiring Alaska Native dancers at Nome’s summer celebration.

The Crystal Serenity’s visit to Alaska’s western coast is historic. At nearly three football fields long and 13 stories tall, the cruise ship is the largest ever to traverse the Northwest Passage, where its well-heeled guests glimpsed polar bears, kayaked along Canada’s north shore, landed on pristine beaches and hiked where few have stepped.

Some remote villages along the way are seeing dollar signs, while environmentalists are seeing doom. They say the voyage represents global warming and man’s destruction of the Earth.

The terrible irony with the Crystal Serenity’s voyage is that it’s taking place only because of climate change and the melting Arctic, said Michael Byers, a professor in the political science department at the University of British Columbia in Vancouver. The Northwest Passage, which connects the Pacific and Atlantic oceans, has long been choked off by ice. But melting brought on by climate change is allowing passengers to cruise up the Bering Strait and then head east toward Greenland over the Arctic Ocean before docking next week in New York City.

“And yet, by actually taking advantage of climate change, it’s contributing to the problem because the ship has a very large carbon footprint of its own,” Byers said.

The cruise ship left Seward, on the Kenai Peninsula, Aug. 16 with about 900 guests and 600 crewmembers on board. During its monthlong journey to New York, it will visit towns and villages in western and northern Alaska, Canada, Greenland and the eastern seaboard.

Smaller cruise ships, those that hold about 200 people, routinely make a port call in Nome and continue through the passage, but this ship is different.

“This is the game changer,” Nome Mayor Richard Beneville said. “This is the one that’s on everyone’s lips.” 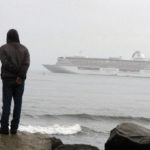 Nome spared nothing to make sure tourists off the high-end cruise liner – tickets cost more than $20,000 per person, with a penthouse starting at about six times that – felt at home.

The guests came to town in waves so they didn’t overwhelm the available services in Nome, population about 3,800.

They arrived at the small harbor dock and loaded into vans or school buses for their adventures, which included getting a gander at a herd of wild musk oxen that had taken up residence just outside town.

Other activities arranged for the cruise ship passengers were hiking and birding tours and helicopter or fixed-wing aircraft flights. Organizers even rescheduled the annual Blueberry Festival so visitors could enjoy a $5 piece of pie while watching traditional Eskimo dancers or browsing tables of seal skin gloves and wallets made by Alaska Native artists. The event took place a block from where the world’s most famous sled-dog race, the Iditarod, ends every March.

“Being at this festival here, the indigenous families that are here, I mean they are so proud of what they have, their handcrafts, their dancing, their music. They just love it, even with the hardships they have to endure, the prices they have to endure,” said Floridian Bob Lentz, who was traveling with his wife, Linda.

Charlie and Joan Davis of San Francisco signed up for the cruise within the first hour it was offered three years ago.

“We’ve been around the world many times, and this is someplace we’ve never been to, that’s somewhat unknown,” Charlie Davis said. “You know, just an adventure.”

They weren’t alone in wanting to be part of the historic cruise.

“This is the longest single cruise we have ever made, and it is the most expensive cruise we’ve ever made because it’s many days, and it’s very expensive to operate up here,” said the ship’s captain, Birger Vorland. “And it’s the one that sold out the fastest; 48 hours, it was basically gone.”

This cruise was three years in the making, and just about everything is unique to the trip, said John Stoll, a Crystal vice president who organized it.

The Serenity was fitted with special equipment to operate in the Arctic, including an ice navigation satellite system. Its operators even chartered cargo flights to northern communities to gather fresh perishables for the vessel’s five-star restaurants.

“The planning and the logistics that has gone into this ship has been nothing short of amazing,” Stoll said.

The cruise company is planning another Alaska-to-New York City voyage next August, catering to travelers like the Lentzes.

“We’re going off on a wildlife adventure right now, and that, to me, is what it’s all about in our twilight years – kind of experiencing things before crazy humans destroy it,” Bob Lentz said.