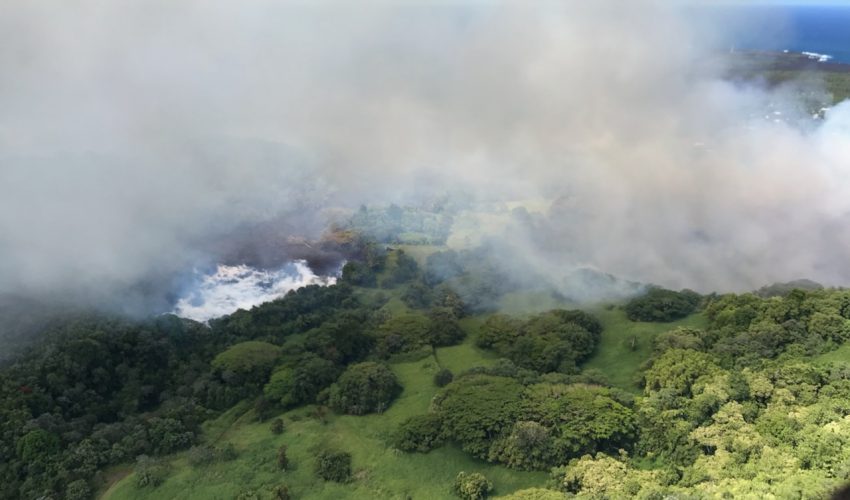 Lava flow in Hawaii caused an entire lake to evaporate

It’s been over 39 days since Hawaii’s Kilauea volcano first began its latest eruption, which started with fissures spewing lava and has so far caused the evacuation of 2,500 people.

Homes, buildings, and even entire neighborhood communities have been damaged or destroyed by lava flows.

One lava flow even caused an entire freshwater lake to completely evaporate earlier in June.

According to the US Geological Survey (USGS), lava from fissure number 8 poured into Big Island’s Green Lake, one of only two freshwater lakes on the island, and boiled the lake away in just 90 minutes.

The lake, also called Ka Wai a Pele, was a popular swimming destination and an estimated 400 years old with depths of up to 200 feet at some places.

“Lava entered Green Lake at about 10 am (June 2), forming a large steam plume, and by 1.30pm lava had filled the lake and boiled off all the water,” said Jessica Ball, a USGS volcanologist. “At the summit, earthquake activity was low and ash emissions from the Halema’uma’u crater were weak. However, gas emissions remain high and we expect small explosive events to continue.”

The Daily Mail reported that lava flow from Kilauea has added nearly a mile of new land in Kapaho Bay.

Even though ash and emissions from the crater were reported as weak by Ball, volcanologists have recorded a “steady pattern” of earthquakes and steam explosions happening one after the other approximately every 24 hours.

None of the earthquakes have been big enough to trigger a tsunami warning, but as long as the earthquakes continue at such a frequent rate, the summit is likely to remain fairly active.

“Following the explosion at the summit, the seismicity will sharply drop off, and then gradually begin to build up as we approach the next summit explosion,” Alex Demas, of the USGS told Hawaii News Now. “So as long as the summit explosions continue, there likely will be earthquakes and ground shaking associated with the explosion.”