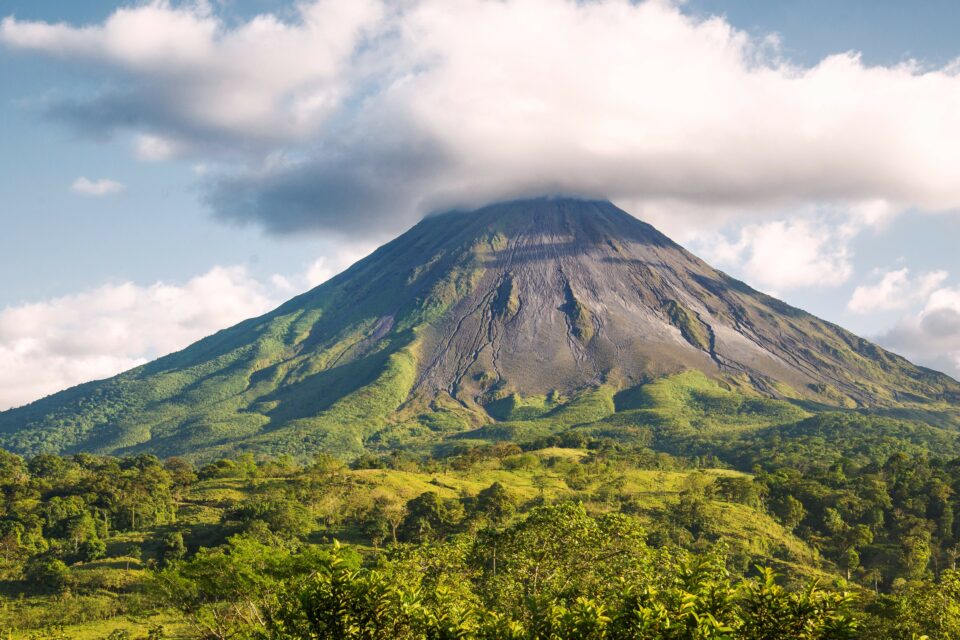 Major volcanic events linked to the slowing of tectonic plates

In the past history of Earth there have been times when magma from the molten mantle has flowed out into, or over, the solid crust of the planet. In the cases where these major volcanic events have led to excessive accumulations of lava, the resulting formations have been termed Large Igneous Provinces (LIPs). Some LIPs have an aerial extent of a few million km2 and involve volumes of igneous rock totaling up to a million km3. Such phenomena clearly had major impacts on the geology, structure and natural environments where they occurred.

In addition, the formation of LIPs can be associated with significant increases in atmospheric carbon or sulfate gas emissions, which may cause either global warming or the formation of sulfuric acid and subsequent global cooling. It is no surprise then that the formation of some of the LIPs in the past 500 million years coincides in time with periods of rapid climatic change and with various mass extinctions of fauna and flora on land and in the oceans.

A new scientific study, published in the journal Science Advances, has now shed light on a possible cause of these major volcanic events that occurred millions of years ago. In the past, the formation of LIPs has been attributed to plumes of magma that have risen, under the influence of convection currents, through the Earth’s mantle. They have also been associated with the movements of Earth’s tectonic plates but, although there are numerous hypotheses about LIP formation, the exact causes have not yet been identified.

In the new study, led by scientists in the School of Natural Sciences at Trinity College Dublin, chemical data was obtained from ancient mudstone deposits in Wales by drilling a borehole down to a depth of 1.5 km. Analysis of the chemical markers enabled the researchers to link two key events that occurred around 183 million years ago, during the Toarcian stage at the end of the Early Jurassic Period.

The team discovered that this time period coincides directly with the occurrence of the major volcanic activity that gave rise to the Karoo and Ferrar LIP’s which covered parts of what are today southern Africa and Antarctica with lava. This time was also characterized by increased concentrations of greenhouse gases, by some of the most severe climatic and environmental changes ever, and by the Pliensbachian–Toarcian extinction event that affected the world’s fauna and flora.

Upon further investigation – and more importantly – the team’s tectonic plate reconstruction models helped them discover the key fundamental geological process that seemed to dictate the timing and onset of this volcanic event and others of great magnitude.

“Scientists have long thought that the onset of upwelling of molten volcanic rock, or magma, from deep in Earth’s interior, as mantle plumes, was the instigator of such volcanic activity but the new evidence shows that the normal rate of continental plate movement of several centimeters per year effectively prevents magma from penetrating Earth’s continental crust,” said Professor Micha Ruhl, who led the research team.

“It seems it is only when the speed of continental plate movement slows down to near zero that magmas from mantle plumes can effectively make their way to the surface, causing major Large Igneous Province volcanic eruptions and their associated climatic perturbations and mass extinctions.”

“Crucially, further assessment shows that a reduction in continental plate movement likely controlled the onset and duration of many of the major volcanic events throughout Earth’s history, making it a fundamental process in controlling the evolution of climate and life at Earth’s surface throughout the history of this planet.”

The scientists hypothesize that a slowing of continental plate movement was the critical event that enabled magma to rise to the Earth’s surface and cause the major volcanic events that have punctuated Earth’s history. This volcanic activity, in turn, is thought to have delivered the devastating climatic and biological upheavals that led to some of the most extreme extinctions of biological life.