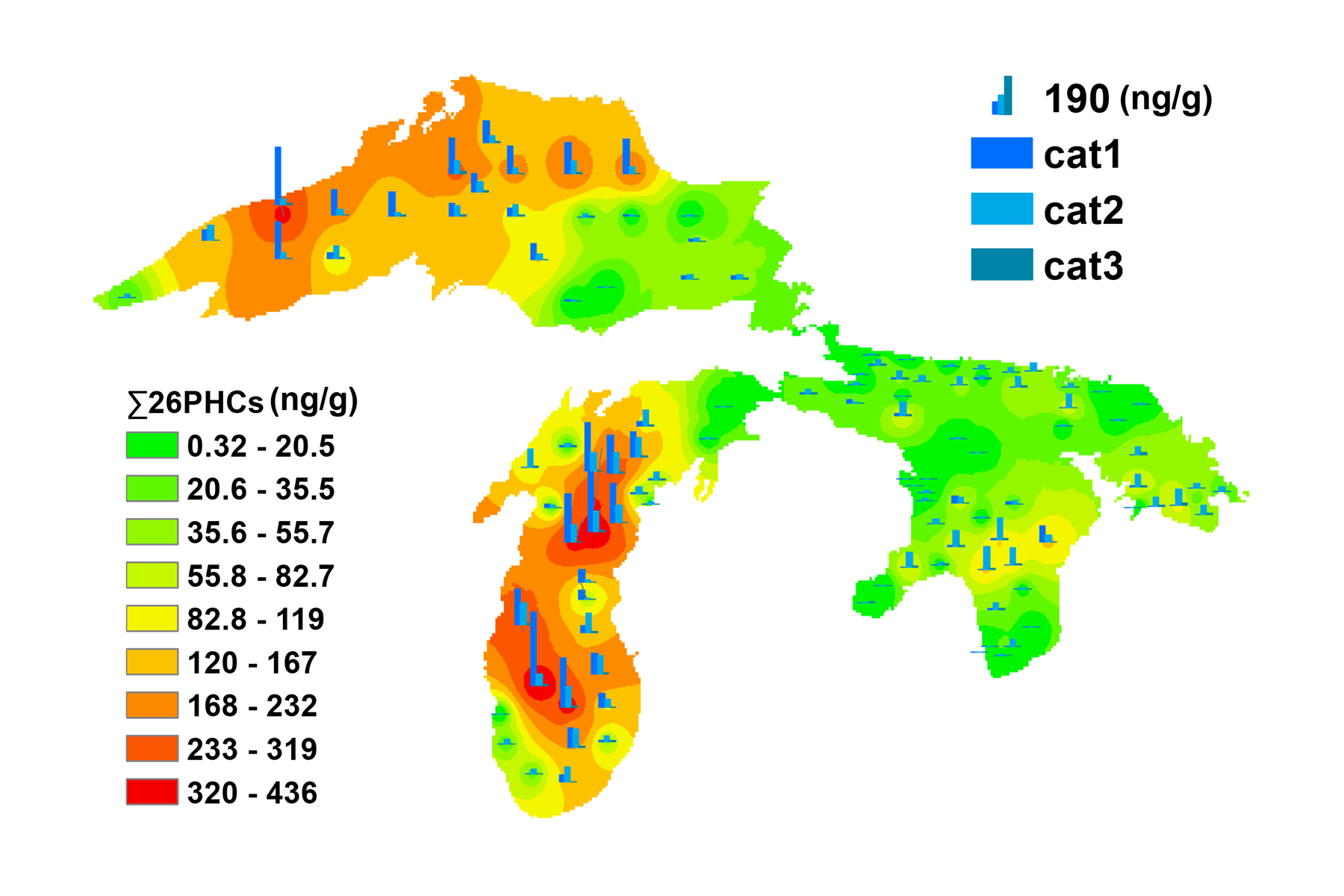 Nasty chemicals called polyhalogenated carbazoles, or PHCZ, are polluting the great lakes. PHCZs can cause developmental problems and have been linked to certain cancers. Studies of PHCZs done in zebrafish have shown that these chemicals can disrupt embryonic development. Another study found that some PHCZs exhibit dioxin-like activity in human breast cancer cells.

Researchers at the University of Illinois at Chicago have mapped the location of thousands of tons of PHCZs in the sediment of the Great Lakes and estimated their amount.

Based on soil samples from the lake bottom and core samples from beneath it, they estimate that about 3,000 tons of PHCZs lie in the sediment under lakes Michigan, Superior and Huron. But not all of it is pollution.

“Because the amount of PHCZs we found is so high, and because of their location in the lakes as well as in the sediment cores we took, we believe that most of the PHCZs in these lakes is the result of natural processes,” said An Li, professor of environmental and occupational health sciences in the UIC School of Public Health and corresponding author of the study, which appeared in the journal Environmental Science & Technology.

“However, we see some PHCZs in sediment laid down in more recent years, which is very likely from man-made sources. These are considered chemicals of emerging concern and should be monitored carefully,” Li said.

Li has monitored environmental pollutants for five years through the Great Lakes Sediment Surveillance program. Her team has collected more than 1,000 sediment samples from the U.S. Environmental Protection Agency research vessel, the R/V Lake Guardian, and analyzed them for a variety of chemical pollutants. Earlier this year they reported finding herbicides including atrazine in the sediment samples.

In this study, Li looked at sediment samples from the three upper Great Lakes and tested for 26 different PHCZs using gas chromatography in combination with mass spectrometry.

Based on the results, the researchers estimate that approximately 3,000 tons of PHCZs are contained in the sediment of the three lakes, with Lake Michigan having the greatest concentrations.

The PHCZs are classified by their location. Category 1 PHCZs were those found in sediment from the deepest parts of the lakes, away from the shore, mostly in layers deposited before 1900. Category 2 PHCZs, which were less abundant, were those found in shallower layers, meaning they were deposited more recently, perhaps within the last few decades.

Category 2 PHCZs had a distribution similar to man-made chemicals in lake sediments, including PCBs, of which there are an estimated 130 tons in the upper Great Lakes. “This further indicates that the category 2 PHCZs are likely man-made,” Li said.

Li thinks that the Category 1 PHCZs are probably the result of the normal breakdown of vegetation that settled in the deepest parts of the lakes. Core samples of sediment laid down in the 1500s are relatively rich in Category 1 PHCZs, she said.

“Because there wasn’t manufacturing of the sort we have today back then, we speculate that these PHCZs are from natural sources, most likely arising from the breakdown of algae and tree materials from the forest that surrounded the lakes before human settlement in this region,” Li said. “But more research is needed to understand how they actually form.”

Li says that manufacturing of organic semiconductors, dyes and pharmaceuticals could cause the release of the category 2 PHCZs into the environment.

This research was part of the Great Lakes Sediment Surveillance Program funded by a Cooperative Agreement from the U.S. EPA Great Lakes Restoration Initiative with Assistance No. GL-00E00538. Guo and Hosseini were supported by predoctoral fellowships from the UIC Institute for Environmental Science and Policy.