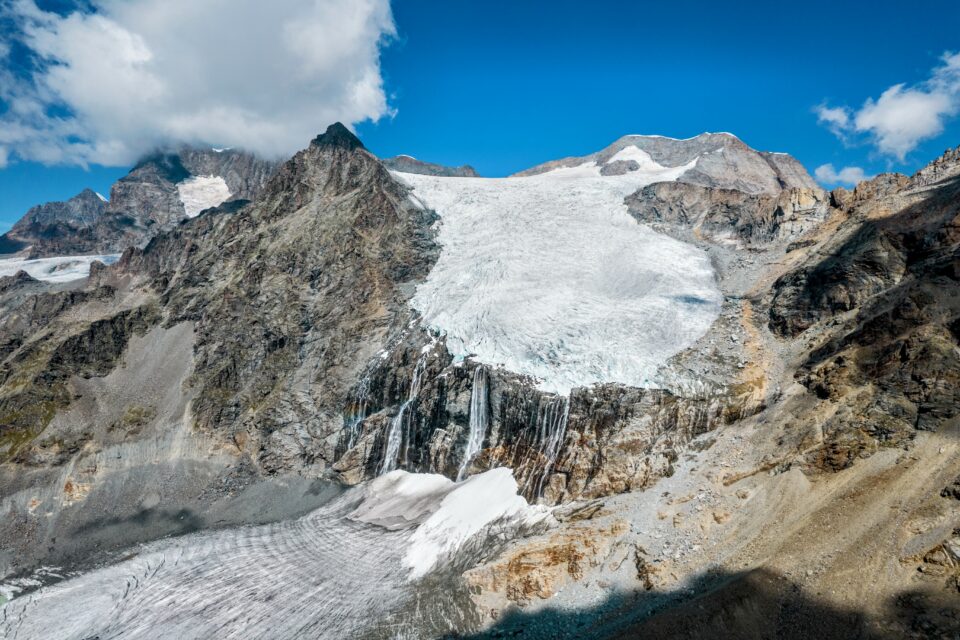 As glaciers melt under the influence of global warming, scientists are beginning to wonder what will become of the microbes that inhabit the surface and subsurface layers of these glaciers. Typically, these microbes include bacteria, viruses, fungi and algae that colonize the ice and make use of the porous surface that develops during the melt season. With the flow of meltwater set to increase in the warming world, large quantities of microbes, nutrients, sediment and organic carbon will be discharged into aquatic environments from glaciers around the world.

A research team headed by Ian Stevens, postdoc student at the Department of Environmental Science at Aarhus University, Denmark, spent two years between July 2014 and July 2016 collecting meltwater samples from the surfaces of eight glaciers across Europe and North America, and from two sites on the Greenland ice cap. They counted the concentration of microbial cells present in the samples, and quantified the amount of carbon that would be transferred when these microbes flowed away into surrounding water bodies.

“The study focuses on the number of microorganisms living on glacier surfaces in the Northern Hemisphere, and what happens with them when the glaciers melt. We collected around 1,000 samples from glaciers from Arctic Canada, Svalbard, Sweden, the European Alps and Greenland, and we counted the microorganisms in the samples,” said Stevens.

The results, published in the journal Nature Communications, indicate that the meltwaters contain an average of around 10,000 microbial cells per milliliter, which equates to a mass of 650,000 tons of carbon entering aquatic habitats in the Northern Hemisphere each year for the following 80 years (by which time the glaciers will be gone). If carbon emissions are cut, slowing global heating and ice melting, the mass of microbes released would be reduced by about a third.

“In the study, we found that, with a medium climate change scenario with an average temperature rise of around 2.7oC in 2100, we can expect up to 0.65 million tons of carbon to be released from the glaciers in the Northern Hemisphere every year,” said Stevens.

The researchers did not study the microbes individually, and cannot comment on whether any of the species or strains will be dangerous for human health. Although alarming claims may be doing the rounds that a virus or strain of bacteria will emerge from the ancient ice that is able to evade the human immune system, this does not have any scientific backing. It is true, however, that very little is known about the thousands of microbial species inhabiting the surface of ice, many of which are new to science.

“We are seeing the glaciers die before our eyes, affecting the microbes that are there, with implications for us locally and globally,” said Dr. Arwyn Edwards, who is from Aberystwyth University in Wales, and was part of the study team. “The mass of microbes released is vast even with moderate warming.”

“We don’t have enough data to understand the value and the threat of these organisms. I routinely get inquiries about whether there is going to be a doomsday pathogen melting out of the glaciers. I think that’s a very minor risk, but it’s not a zero risk, so we need risk assessment of these microbes.”

The researchers do state that most of the bacteria were killed by the sun soon after exposure, suggesting that even if a human pathogen is among them, the chance of infection is slight.

In terms of the major purpose of the study, to quantify movements of carbon into aquatic environments, “Much of the carbon released from the melting glaciers will end up in the rivers supplied by the glaciers, or in the sea. However, we do not yet know whether the microorganisms can be harmful or beneficial, or what consequences the changes in the carbon supply could have for agriculture using the water from glaciers,” said Stevens.

In the coming period, the researchers will continue to study meltwater from glaciers in the Northern Hemisphere to learn more about what microorganisms the meltwater contains and how many of them can survive transport onwards into the aquatic environment.