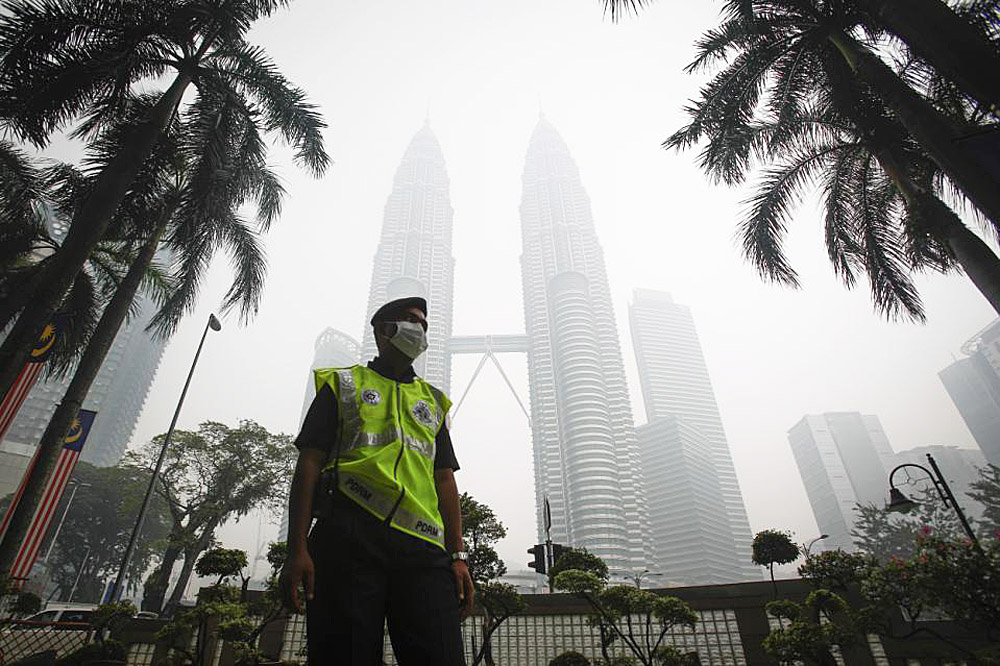 For weeks now, the quality of life in parts of Southeast Asia has been left to sheer chance – the direction of the wind. Every day, it alone determines which city will be shrouded by peaty white smoke blowing from burning Indonesia forest fires.

Like neighbors who must tolerate the bad habits of the family next door, Malaysia, Singapore and Thailand have endured the annual problem of smoke that stings the eyes, irritates the throats and shuts down schools and airports. Now their patience is wearing thin, and harsh words are flying across the borders in a departure from region’s non-confrontational etiquette.

“We all see it, breathe it; and there is no hiding,” former Singapore Prime Minister Goh Chok Tong wrote on Facebook.

Some days, the smoke is so bad that the gleaming skylines of Singapore and Kuala Lumpur disappear in an all-encompassing grayness. More than 7,000 schools in peninsular Malaysia were shut on Monday and Tuesday, forcing some 4 million students to stay home. Fifteen final races of the Swimming World Cup meet in Singapore were canceled last week. Tourists are staying away. Respiratory problems are on the rise.

Some have tried to make light of the situation, including wedding couples in Singapore who have commissioned haze-themed photo shoots against famous backdrops.

“Indonesia needs to keep to its commitments. Regionally, countries are getting fed up that Indonesia is not coordinating this very well,” Reuben Wong, a political science professor at the National University of Singapore, told The Associated Press.

Scientists predict the haze this year is on track to surpass 1997 levels when pollution soared to record highs in an environmental disaster that cost an estimated $9 billion in health costs and lost revenue. A bad bout of haze resembles wintry fog, but laced with tiny particles of ash that are particularly harmful to the elderly, children and those with chronic heart and lung conditions.

According to the Indonesian National Institute of Aeronautics and Space, a total of 1,687 fires are burning in Sumatra, a giant island that runs parallel to the western coastline of Malaysia and surrounds Singapore, and in Kalimantan, a province on Borneo island, which is also occupied by Malaysia’s Sarawak and Sabah states. Sometimes the wind carries the smoke far north across Malaysia into southern Thailand.

The culprits are well known. Big corporations set fire to forests every year to clear land speedily so the peaty soil can be planted with rows upon rows of trees that will be eventually harvested for paper pulp and palm oil. Oil palm plantations earned revenue of $18.5 billion in Indonesia last year.

“For them, burning the forest is the fastest, cheapest and most profitable method instead of clearing with heavy equipment,” said Raffles Brotestes Panjaitan, the director of forest fire control in Indonesia’s Ministry of Environment and Forestry. “Our regulation is clear – no burning of forests – but they violate the law for the sake of profits.”

He told the AP that the intentional burning, especially on peat land, and the absence of rain because of the El Nino effect have worsened the fires this year. He described the burning ground as a vast smoldering stove with coal burning up to 10 meters (33 feet) deep.

The Indonesian government says more than 191 individuals and 47 corporations are under investigation. The license of one company has been revoked and three others suspended, and 72 people have been arrested. The government has also deployed some 22,146 soldiers, policemen and fire personnel in six provinces to fight the fires, with aircraft conducting water-bombing and cloud-seeding operations. Another 6,000 soldiers are expected to be deployed soon.

In September 2014, Indonesia ratified a regional agreement under which it promised to take steps to ease the problem through its own efforts and with international cooperation, or be held liable for the impact of haze on its neighbors.

But a long-term solution is not around the corner.

Indonesian President Joko Widodo has pleaded for the patience, saying the haze is “not a problem that you can solve quickly.” He added: “You will see results soon, and in three years, we will have solved this.”

The crisis led to a diplomatic spat of sorts when Vice President Jusuf Kalla said neighboring countries “already enjoy 11 months of clean fresh air from Indonesia” and shouldn’t complain about one month of haze.

“How is it possible for senior people in the government to issue such statements, without any regard for their people, or ours, and without any embarrassment, or sense of responsibility?” he wrote on Facebook.

In Malaysia, a deputy minister suggested the government should seek compensation from Indonesia for financial losses, saying Malaysian street vendors saw their businesses plummet 30 percent in a month.

“It is ridiculous for them not to solve this problem,” Chew Mei Fun told national news agency Bernama . “Children can’t go to school. At the same time, nobody will come to visit Malaysia.”

But while the fires are burning in Indonesia, its neighbors do share some responsibility. Some of the oil palm plantations conducting slash-and-burn work are owned by Malaysian and Singaporean companies, according to research by the nonprofit Centre for International Forestry Research.

“There are no easy solutions,” said Heng Yee Kuang, an associate professor of international relations at the Lee Kuan Yew School of Public Policy in Singapore. “There needs to be better data collected on who is actually causing the forest fires.”

Joshi reported from Bangkok. Ali Kotarumalos and Niniek Karmini in Jakarta and Eileen Ng in Kuala Lumpur contributed to this report.