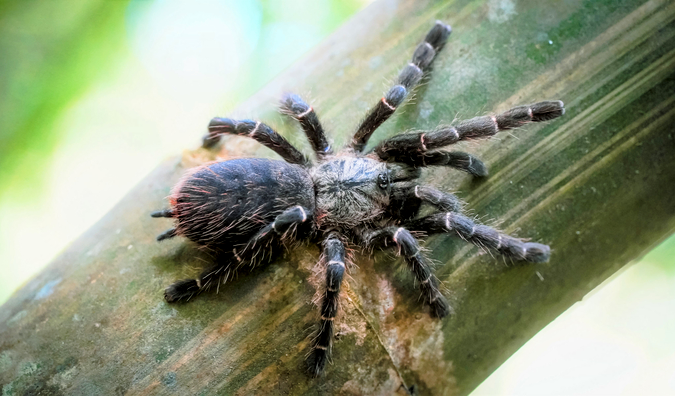 Thailand is often overlooked in terms of its natural beauty and biodiversity, even as its natural environments face the threats of development that loom everywhere in the world. Illustrating this point is the discovery of a new genus of tarantula that lives inside of bamboo stalks.

Dr. Narin Chomphuphuang, an arachnologist at Khon Kaen University, explained the context of the discovery. “Few people realize how much of Thailand’s wildlife remains undocumented. Thai forests now cover only 31.64% of the country’s total land area. We are primarily on a mission to research and save the biodiversity and wildlife within these forests from extinction, especially species-specific microhabitats.”

The tarantula was first found by JoCho Sippawat, a famous Thai wildlife YouTuber, who later teamed up with Dr. Chomphuphuang. The pair also collaborated with Chaowalit Songsangchote of Kasetsart University, who formally described the newly discovered tarantula.

The scientists named the spider Taksinus bambus, the generic name honors the Thai king Taksin the Great, who was once governor of Tak province – where the tarantula was found. Bambus is in reference to the arachnids’ curious way of living in bamboo, something never before seen in a tarantula.

The spiders themselves do not create holes or cracks in bamboo stalks but instead rely on other animals such as bamboo worms, carpenter beetles or rodents to do this work. Once the spider moves into a bamboo stalk, the animal lines the new home with silk.

There are other arboreal tarantulas found in southeast Asia, but this is the first to be discovered in northern Thailand. It’s also unusual because it specializes in one particular type of plant.

“We examined all of the trees in the area where the species was discovered. This species is unique because it is associated with bamboo, and we have never observed this tarantula species in any other plant. Bamboo is important to this tarantula, not only in terms of lifestyle but also because it can only be found in high hill forests in the northern part of Thailand, at an elevation of about 1,000 m. It is not an exaggeration to say that they are now Thailand’s rarest tarantulas,” said Dr. Chomphuphuang.