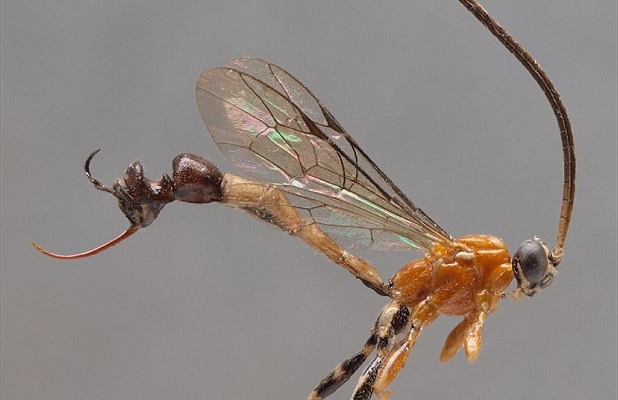 Wasps have a pretty good defense in their painful stinger – or so we all thought. A species of wasp recently discovered in Peru has upped the ante, so to speak.

This astonishing wasp totes more than a stinger on its tail; it’s also equipped with what appears to be an ant’s head built into its posterior. Researchers were so shocked at their discover that they named the wasp species Clistopyga carumba. The name is based on the the Spanish phrase “Ay Carumba!” that’s often used to express surprise.

The wasp’s appearance is so odd that initially, scientists thought that it had suffered some sort of deformation. They soon realized their mistake and deemed the species “the most bizarre parasitoid wasps ever collected and described,” according to the journal Zootaxa.

Scientists found the female wasp specimen in storage at The Natural History Museum of San Marcos, Lima, Peru. Sadly, the dead specimen is the only one of its type ever to be discovered.

This has led scientists to hypothesize about the many possible uses of the wasp’s bizarre ant-head tail. The design of the ant’s posterior may allow it to bend upwards at a more aggressive degree, better enabling it to attack prey.

Another possibility is that that the tail is an example of Batesian mimicry. This evolutionary tactic allows certain species to mimic other harmful species in order to frighten away potential attackers. Burrowing owls use this sort of mimicry, imitating the hissing sounds of a rattlesnake to drive predators away from their underground nests.

In the case of Clistopyga carumba, because spiders are frightened of ants, the wasp uses a tail that resembles an ant’s head to deter lurking spiders. Scientists also believe that spiders may be attracted to the tail, seeking to attack what they believe is a dangerous ant. When the spider gets close enough, the wasp is able to kill it.

Image: Zoological Museum at the University of Turku