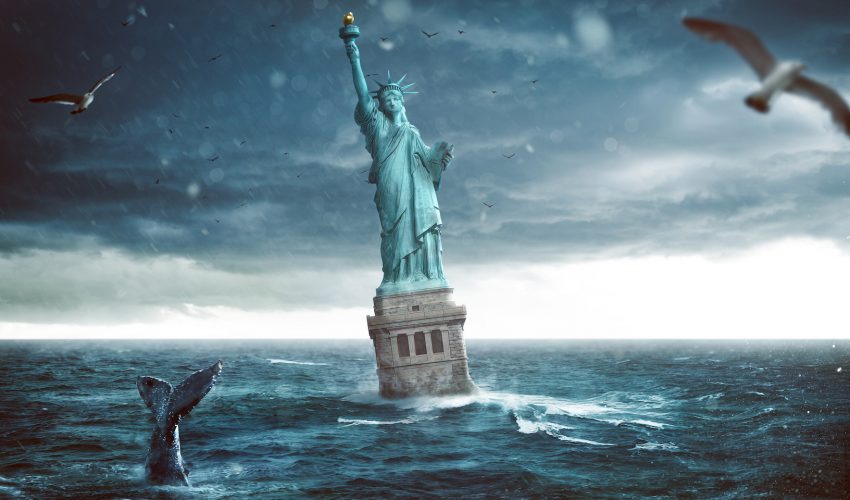 A new study has found that if greenhouse gas emissions are not controlled, and efforts to mitigate climate change ignored, parts of New York City could be submerged beneath 50 feet of floodwaters by the year 2300.

The study was conducted by researchers from Pennsylvania State University, who analyzed possible flood heights in the coming years if climate change remains unchecked.

The researchers used simulations to predict future flood levels taking into account the history of sea levels and storm surges dating back to the preindustrial era. The simulations also included current and future projected emissions of carbon dioxide.

If emissions continue to increase without any major effort to hinder them, the rising sea level from the melting of the Antarctic ice sheet could be worse than any previous predictions.

The researchers note that the melting ice sheet and its effect on rising sea levels are where the real problems lie for coastal cities like New York.

“If we cause large sea-level rise, that dominates future risks, but if we could prevent sea-level rise and just have the storm surge to worry about, our projections show little change in coastal risk from today during most years,” said Michael E Mann, a professor of meteorology and atmospheric science at Pennsylvania State.

“While those storms that strike New York City might be bigger and stronger, there may be fewer of them as changing storm tracks increasingly steer the storms away from NYC and toward other regions.”

The key lies in preventing sea level rise. If the Antarctic ice sheet is kept intact, storm surges might not have as big an impact on coastal cities.