Octopus on the half shell: The amazing argonaut • Earth.com 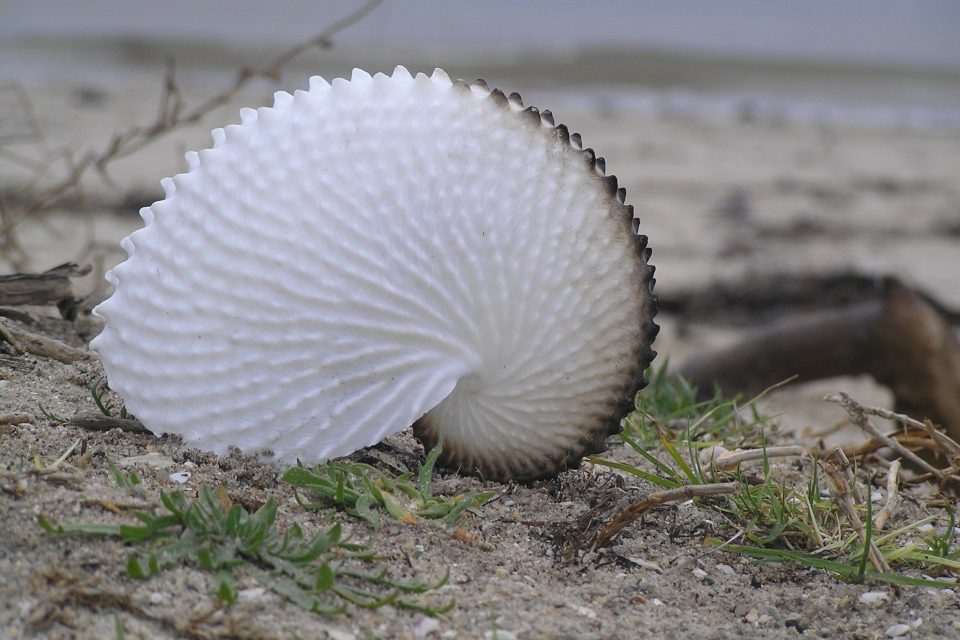 Octopus on the half shell: The amazing argonaut

Call it a cephalopod renaissance. Octopuses, it seems, are everywhere these days. Science news sites are rife with stories about these molluscs—their daring escapes from aquariums, their oddly human interactions with their keepers, their talent for mimicry, the propensity for one species to use discarded coconut shells as moveable shelters. Home decor, jewelry, fashion, and art have picked up on the trend too. This is hardly a new development, though—it’s more like a resurgence. Ancient cultures, from the Minoans and Greeks, to the Japanese, to the Scandinavians, have fixated on the bizarre appearance and disconcerting intelligence of octopuses, enshrining them in art and legend.

The argonaut, a lesser-known octopus whose blob-like mantle, or body, is tucked away inside a translucent, removable shell has thus far been given short shrift in this most recent surge of appreciation. Though perhaps lacking the humanoid charisma of their benthic, or bottom-dwelling cousins, these pelagic, or open-ocean, denizens are hardly deficient in charm.

Aristotle hypothesized in his History of Animals that they used their webbed forearms as sails for their boat-like shells, which he believed to have been hijacked from another animal. This has long been disproven, but what is now known about the argonauts is equally bizarre. Also called the paper nautilus, these creatures were first assigned their current taxonomy in Carolus Linnaeus’s Systema Naturae (1758 ed.).

Long referred to as nautiluses or “sailors”  by the ancient Greeks, that name was given by Linnaeus to their cousins the true nautiluses (family Nautilidae), a separate group of cephalopods that also have shells. Linnaeus named them instead for the sailors aboard the mythological Argo, captained by Jason. Jason and his Argonauts were a fixture in Greek mythology, notable for questing after the Golden Fleece, the hide of a magical ram. Like the Argonauts, these octopi roam the open ocean, but they quest after more prosaic things….food and mates.

The females of the species attract the most attention. It is they that produce the papery shells that give them their common name—paper nautilus. These shells appear to be receptacles, or brood chambers, for their eggs, which are carried until hatching. The males, 4-10% of the size of the females, which may reach lengths of up to a foot, do not produce shells at all. Their anatomy, though, is just as modified as that of the female. They possess a hectocotylus, a modified arm on the left side. This arm is stored inside a sac until a suitable female is happened upon. Then, it is released into the females mantle cavity, where the spermatophore it contains fertilizes the 20,000-100,000 eggs.

When these arms, which can persist in living form for a considerable amount of time, were first discovered, they were believed to be parasitic worms. Females have been found with up to 30 hectocotyli, indicating that they mate more than once. On occasion, the miniscule males have been found riding along inside the female’s shell. Very little else is known about their behavior. The more-conspicuous females, though only rarely observed alive in the wild, have provided most of the current knowledge about the argonaut. Further insights have been provided by occasional mass strandings, which provide numerous specimens for study.

Because the female shells display a fair degree of individual variation, it was once thought that there were some 50 species of argonauts. Closer study has suggested that there may be as few as four. These shells are secreted by the female’s specialized forearms, a fact not discovered until it was demonstrated by pioneering French marine biologist Jeanne Villepreux-Power in 1832.

Females begin producing them when they are only two weeks old. Unlike most shells, which are composed of aragonite, those of the argonaut are composed of calcite. That composition, along with its attenuated thickness, makes it uniquely vulnerable to the effects of ocean acidification, a side effect of the release of CO2 into the atmosphere. The declining pH of the ocean may make it difficult for females to mineralize their shells. 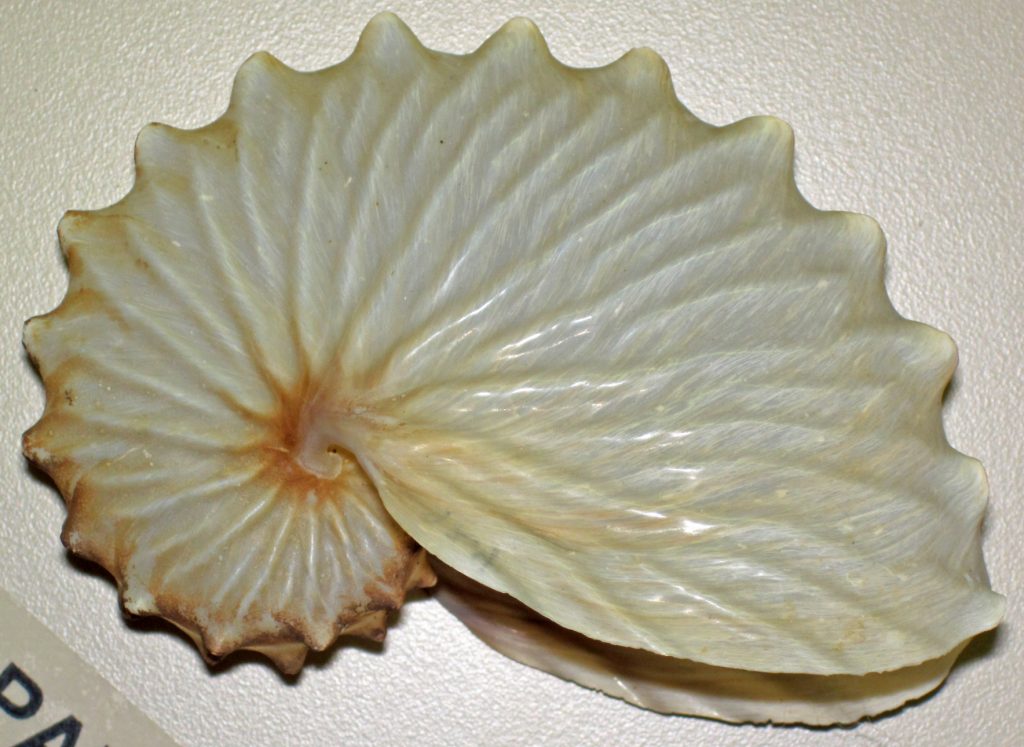 This is a major problem for this eerily beautiful mollusc. In addition to providing shelter for their eggs, these shells also assist females in maintaining neutral buoyancy at depth. Bubbles found inside the shell in captive specimens were long thought to be an result of captive life, perhaps forced in by aeration devices. But a 2010 study demonstrated that female argonauts actively take air into the shell at the surface and compress it in order to adjust their buoyancy. Neutral buoyancy is a key adaptation in a pelagic species; it allows the animal to expend less energy maintaining its position in the water column. Interestingly, unlike their cousins the nautiluses, they can exit their shells without apparent harm. If they lose a shell, they can simply secrete a new one. Despite the fragility of these vessels, argonaut shells are evident in the fossil record as early as 33 million years ago.

When females have been observed alive in the wild, they display a number of strange habits. Individuals have been found riding atop jellyfish. Closer examination has revealed that they aren’t just hitchhiking. They’re actually using the unfortunate cnidarians as food vacuums. They chew holes into the top of the bells of the jellyfish and siphon off food that their hosts have captured. They’ve also been seen living inside of salps, a type of gelatinous, transparent invertebrate. Their closest relatives, the blanket and football octopuses, have similar associations. When not parasitizing lower life forms, female argonauts may form rafts of up to 30 individuals, clinging to each other as they float through the waves. This rafting strategy, which likely saves energy, may also make them vulnerable to their many predators. Seabirds, fish, including sharks, seals, and whales and dolphins all enjoy the juicy bodies tucked away inside those papery porcelain shells. What could be more tempting than a whole cluster of them, floating together like grapes ready to be plucked from the stalk?

Argonauts are predators themselves and are known to eat fish, crustaceans, and other mollusks, including pteropods and heteropods, which are free-swimming snails, and even other octopi. When not using jellyfish to suck them up, they chase their prey using jet propulsion. This means of locomotion involves taking water into the mantle and expelling it forcefully—hardly the passive sailing imagined by Aristotle.

Because they quickly expire in captivity, it is not known whether argonauts possess the intelligence so apparent in other octopuses. Appropriately enough for a creature with mythological associations, much of their life history is still obscured by the depths, and shared with human observers in tantalizing fragments washed ashore or seen through a veil of ink as the creatures retreat into the waves.