Ozone hole over Antarctica is the smallest it has been since 1988 • Earth.com 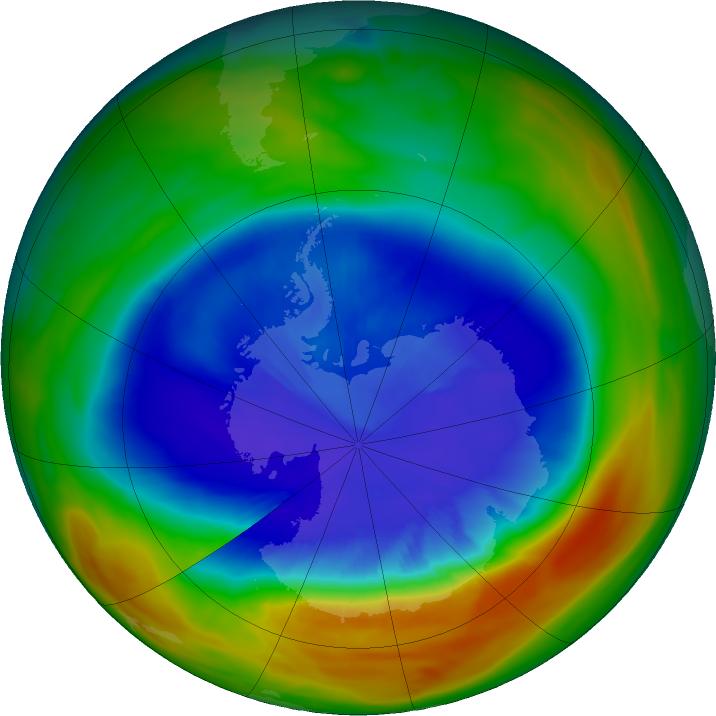 Satellite data has revealed that the hole in Earth’s ozone layer over Antarctica is now the smallest it has been in almost 30 years. NASA and NOAA collaborate to monitor the status of the hole in the ozone each year.

According to NASA, the ozone hole reached its peak extent on September 11, spanning an area about two and a half times the size of the United States, or 7.6 million square miles. The ozone hole then diminished throughout the rest of September and into October. In addition, NOAA measurements showed the least amount of ozone depletion over Antarctica since 1988.

Paul A. Newman is a chief scientist for Earth Sciences at NASA’s Goddard Space Flight Center in Greenbelt, Maryland.

“The Antarctic ozone hole was exceptionally weak this year,” said Newman. “This is what we would expect to see given the weather conditions in the Antarctic stratosphere.”

The smaller ozone hole was primarily influenced by a warmer Antarctic vortex, the stratospheric low pressure system above Antarctica. The scientists explained that the warmer conditions helped minimize the formation and persistence of clouds which lead to the chlorine- and bromine-catalyzed reactions that destroy ozone. These conditions are similar to those found in the Arctic, where ozone depletion is much less severe.

Despite the warmer stratospheric conditions which have reduced ozone depletion over the past two years, the current ozone hole area is still large due to high levels of ozone-depleting substances like chlorine and bromine. The scientists said that the reduction of the ozone hole over the last two years is due to natural variability and is not a sign of rapid recovery.

The Antarctic ozone hole was first detected in 1985. The hole forms during the Southern Hemisphere’s late winter as the sun reacts with man-made, chemically active forms of chlorine and bromine. These reactions destroy ozone molecules.

In 1987, international leaders signed the Montreal Protocol on Substances that Deplete the Ozone Layer to begin regulating ozone-depleting compounds. The ozone hole over Antarctica is expected to gradually diminish as chlorofluorocarbons, chlorine-containing compounds which were once frequently used as refrigerants, continue to decline. Scientists predict that the Antarctic ozone hole will return back to 1980 levels by around 2070.