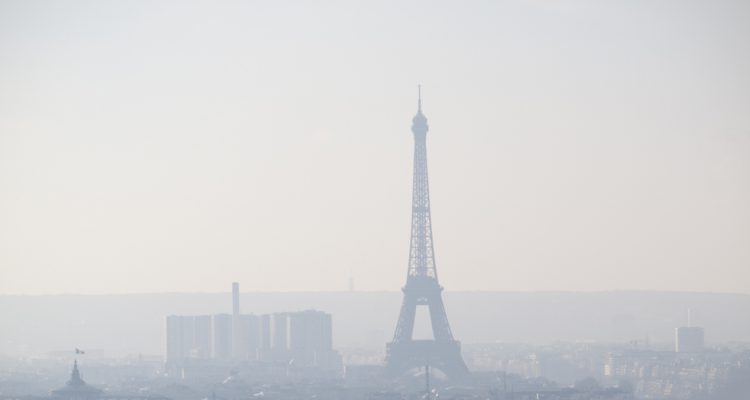 The city of Paris is experiencing its worst bout of winter pollution in at least a decade. Citizens have begun using face masks commonly seen in notoriously polluted cities like Beijing.

The pollution problem culprit is tiny particulate matter that has filled the air, creating a brown haze that blankets the city. Airparif, an organization responsible for monitoring air quality in Paris, says this “very fine dust” is mostly due to car emissions and wood-burning heating. Spokeswoman Amelie Fritz attributes the combination of a high-pressure weather system and a low-altitude blanket of warmer air over the city traps the pollution, acting like a saucepan lid. “An anticyclone with very little wind that prevents the dispersion of pollutants,” said Fritz.

The PM10 particles, or particulate matter 10 micrometers or less in diameter, are breathed in and absorbed into the bloodstream and lungs. According to the World Health Organization, they can cause lung cancer, heart disease, asthma, and acute respiratory infection.

In response to the pollution problem, Paris officials have introduced new measures to cut down on emissions. To incentivize commuters to switch to public transportation, the Metro, trains, and buses have been free since Tuesday. This is said to have cost the city approximately 4 million euros ($4.3 million) per day.

Speed limits have also been reduced, in addition to a ban on outdoor and indoor fires. Home heating has been limited to no more than 18 degrees Celsius (64 degrees Fahrenheit).

Officials have also introduced an alternating vehicle ban, depending on whether they have odd or even-numbered license plates. Violations cost drivers between 22 and 75 euros ($23 and $80), though the rules do not apply to small trucks carrying food and essentials.

But it remains to be seen how many citizens are actually adhering to the new restrictions. “We’ve noticed that the measures haven’t been followed that much,” said Fritz. “We’ve noticed only 5 to 10 percent less traffic.”