Polar bears across the Arctic are facing much shorter sea ice seasons • Earth.com 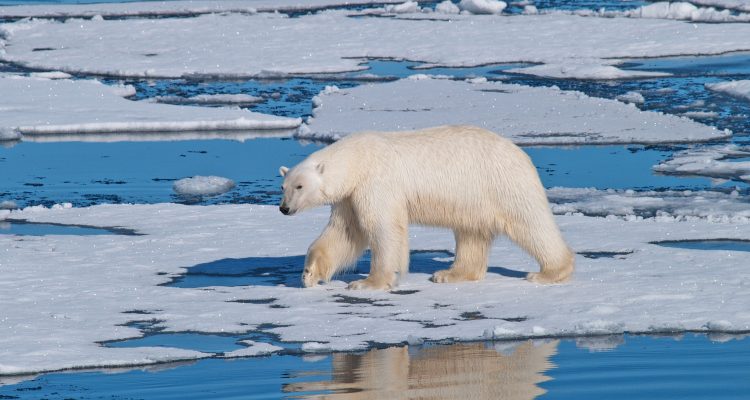 Polar bears, the poster-child for climate change, are among the animals most affected by the seasonal and year-to-year changes in Arctic sea ice, because they rely on this surface for essential activities such as hunting, traveling and breeding.

A new University of Washington study, with funding and satellite data from NASA, finds a trend toward earlier sea ice melt in the spring and later ice growth in the fall across all 19 polar bear populations, which can negatively impact the feeding and breeding capabilities of the bears. The paper, published Sept. 14 in The Cryosphere, is the first to quantify the sea ice changes in each polar bear subpopulation across the entire Arctic region using metrics that are specifically relevant to polar bear biology.

The analysis shows that the critical timing of the sea ice break-up and sea ice freeze-up is changing in all areas in a direction that is harmful for polar bears.

Nineteen separate polar bear populations live throughout the Arctic, spending their winters and springs roaming on sea ice and hunting. The bears have evolved mainly to eat seals, which provide necessary fats and nutrients in the harsh Arctic environment. Polar bears can’t outswim their prey, so instead they perch on the ice as a platform and ambush seals at breathing holes or break through the ice to access their dens.

“Sea ice really is their platform for life,” said co-author Kristin Laidre, a researcher at the UW’s Polar Science Center. “They are capable of existing on land for part of the year, but the sea ice is where they obtain their main prey.”

The new study draws upon 35 years of satellite data showing sea ice concentration each day in the Arctic. NASA scientists process the data, stored at the National Snow and Ice Data Center in Boulder, Colorado.

The center also reports each fall the yearly minimum low for Arctic sea ice. This August saw the fourth lowest in the satellite record.

Across all 19 polar bear populations, the researchers found that the total number of ice-covered days declined at the rate of seven to 19 days per decade between 1979 and 2014. Sea ice concentration during the summer months — an important measure because summertime is when some subpopulations are forced to fast on land — also declined in all regions, by 1 percent to 9 percent per decade.

The most striking result, researchers said, is the consistent trend across all polar bear regions for an earlier spring ice melt and a later fall freeze-up. Arctic sea ice retreats in the springtime as daylight reappears and temperatures warm. In the fall months the ice sheets build again as temperatures drop.

“These spring and fall transitions bound the period when there is good ice habitat available for bears to feed,” Laidre said. “Those periods are also tied to the breeding season when bears find mates, and when females come out of their maternity dens with very small cubs and haven’t eaten for months.”

“We expect that if the trends continue, compared with today, polar bears will experience another six to seven weeks of ice-free periods by mid-century,” Stern said.

The trend appears to be linear and isn’t accelerating or leveling off, Stern added. The researchers recommend that the National Climate Assessment incorporate the timing of spring ice retreat and fall ice advance as measures of climate change in future reports.

The study’s results currently are used by the International Union for Conservation of Nature’s Polar Bear Specialist Group, which completes assessments of polar bears and issues the species’ conservation status. Specifically, the group used the sea ice metric as a measure of polar bear habitat in the IUCN Red List assessment of polar bears. The researchers plan to update their findings each year as new ice coverage data are available.