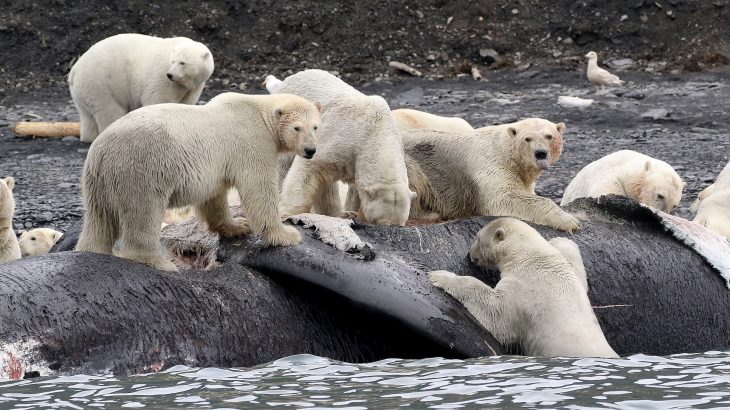 Polar bears depend on sea ice cover so that they can hunt seals, their primary food source. But when sea ice cover is low, bears are not able to get as much food as they need.

Researchers have theorized that polar bears were able to survive past interglacial warm periods in the Arctic by scavenging on washed up whale carcasses, sometimes returning to the same carcass for years.

In 2017, over 180 polar bears were observed feeding on bowhead and gray whale carcasses. The bears’ ability to store tremendous amounts of fat makes whale carcasses a perfect meal for times when hunting opportunities are scarce.

Researchers from the University of Washington conducted a study to see if whale carcasses during low periods of ice cover would be enough to sustain polar bear populations in the future, when summers in the Arctic will likely be ice-free by 2040 due to climate change.

The study was published in the journal Frontiers in Ecology and the Environment.

“If the rate of sea ice loss and warming continues unmitigated, what is going to happen to polar bear habitat will exceed anything documented over the last million years,” said Kristin Laidre, the lead author of the study. “The extremely rapid pace of this change makes it almost impossible for us to use history to predict the future.”

However, there are concerns that the severity of future climate change will make whale carcasses a limited and unsustainable food source.

“But when we look at the situation now, ecologically, with respect to food sources, it’s a very different picture,” said Ian Stirling, a co-author of the study. “The potential of whale carcasses to bail bears out may still be important in a few areas but, quite simply, their overall availability is going to be substantially less than before humans invaded the Arctic.”

To find out if whale carcasses could provide enough food for polar bears in a warmer climate, the researchers first calculated how much blubber and meat an average population of 1,000 polar bears would need to survive each year.

Then, the researches calculated the abundance of whale populations on the coasts of Chukotka and Alaska to see if the average ten percent die-off rate in whale populations would provide enough washed-up whale carcasses for polar bears during times of low ice cover.

It was discovered that during an ice-free summer, 1,000 polar bears would need about eight whales to sustain their population and during the spring when bears eat much more, 20 whales would be required.

In Russia, enough whales die every year to meet this demand currently, but the question remains if this will be a sustainable option as the Arctic experiences rapid warming.

Arctic whale populations are shrinking due to human activity and there is no guarantee that enough whales will regularly die off and end up stranded on shore to feed hungry polar bears.

“Scavenging on large whale carcasses is probably important for bears in some areas and may buffer them from sea ice loss,” said Laidre. “However, carcasses of large whales are not expected to replace seals as nutritional resources as we move towards the ice-free Arctic. In most regions, the environmental changes are too large and the whale carcasses are too few.”