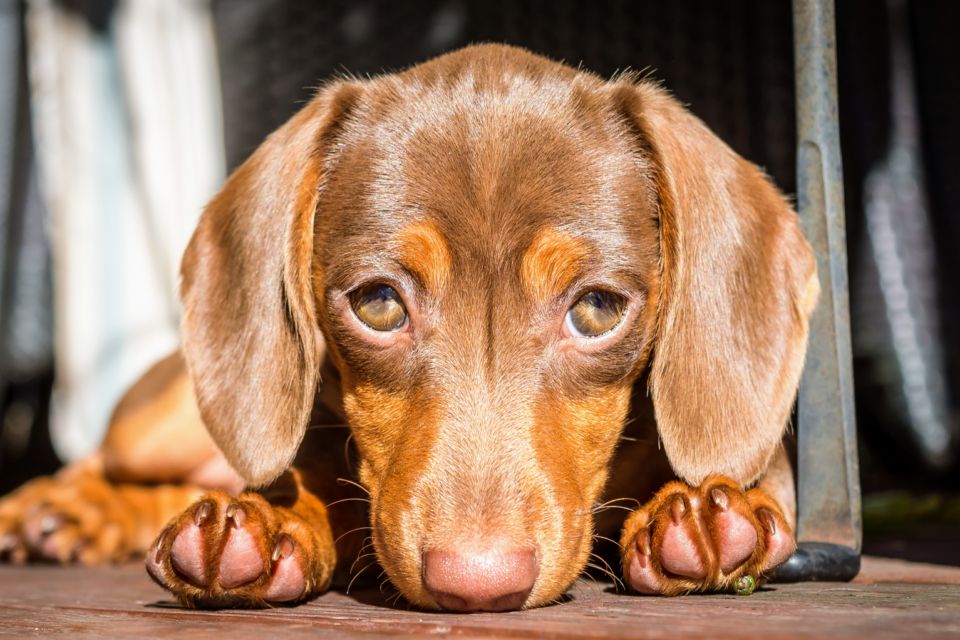 Dogs derived originally from wolves and, although the exact timing of domestication is not known, paleogeneticists estimate that the two species diverged genetically some 33,000 years ago, during the Last Glacial Maximum. We will never know what motivated our ancestors to allow wild wolves to approach closer to their living areas and to their particularly vulnerable young but, ultimately, humans began to utilize wolves for services, such as guarding, and the process of domestication began.

This means that wolves were the first species to be domesticated, preceding the domestication of food or livestock species, such as sheep and goats, by at least 4–5 thousand years.

Once humans started favoring certain wolves for their behavioral docility and friendliness, and breeding them selectively, many aspects of wolf anatomy, morphology and behavior began to change.  Today, it is noticeable that dogs have very expressive faces, when compared to wolves. The anatomy of the facial musculature in dogs allows them to move their eyebrows in a way that wolves cannot, giving rise to that irresistible puppy-dog face that can melt an owner’s heart.

A new study on the facial musculature of dogs and wolves now provides scientific evidence that dogs have indeed gone through anatomical changes that allow them to be more expressive with their faces.

“Dogs are unique from other mammals in their reciprocated bond with humans which can be demonstrated though mutual gaze, something we do not observe between humans and other domesticated mammals such as horses or cats,” said Anne Burrows, PhD, professor in the department of physical therapy at Rangos School of Health Sciences at Duquesne University in Pittsburgh, and the study’s senior author. “Our preliminary findings provide a deeper understanding of the role facial expressions play in dog-human interactions and communication.”

The new study investigated the anatomy of tiny muscles, called mimetic muscles, in the faces of dogs and wolves. These muscles are used to form facial expressions, both in canids and in humans. Mimetic muscles may contain “fast-twitch” or “slow-twitch” muscle fibers. In humans these muscles are predominantly composed of fast-twitch myosin fibers that allow rapid contraction but cannot sustain protracted activity. This explains why we can rapidly adopt a smile for the camera, but cannot hold this expression for long without tiring. Muscles with more “slow-twitch” fibers are better for sustained contraction as they don’t tire as quickly.

The researchers compared the myosin fiber composition of two different facial muscles from wolves and dogs. They found that the dog muscles from a range of different breeds contained between 66 and 95 percent fast-twitch fibers while wolves averaged around 25 percent.  In contrast, dog facial muscles only averaged 10 percent slow-twitch myosin fibers while wolves averaged 29 percent.

The relative presence of fast-twitch fibers in dogs mirrors the range found in human facial muscles, suggesting that humans may have selected for dogs in the past that were capable of more rapid and expressive facial movements. They may have found dogs with a wider range of rapid facial expressions, especially around the eyes, more appealing, and would have favored this characteristic through thousands of years of selective breeding.

“These differences suggest that having faster muscle fibers contributes to a dog’s ability to communicate effectively with people,” said Burrows. “Throughout the domestication process, humans may have bred dogs selectively based on facial expressions that were similar to their own, and over time dog muscles could have evolved to become ‘faster,’ further benefiting communication between dogs and humans.”

The fast-twitch muscle fibers not only facilitate the small, rapid changes in expression that dogs display, but are also ideal for the short, powerful muscle contractions involved in barking. Wolves, on the other hand, need slow-twitch fibers for the extended muscle movements involved in howling.

Burrows will present the research at the annual meeting of the American Association for Anatomy, to be held during the Experimental Biology (EB) 2022 meeting in Philadelphia between 2 and 5 April. The research team also included Madisen Omstead, laboratory manager for the Rangos School of Health Sciences department of physical therapy.