Raptors find a home in the city • Earth.com 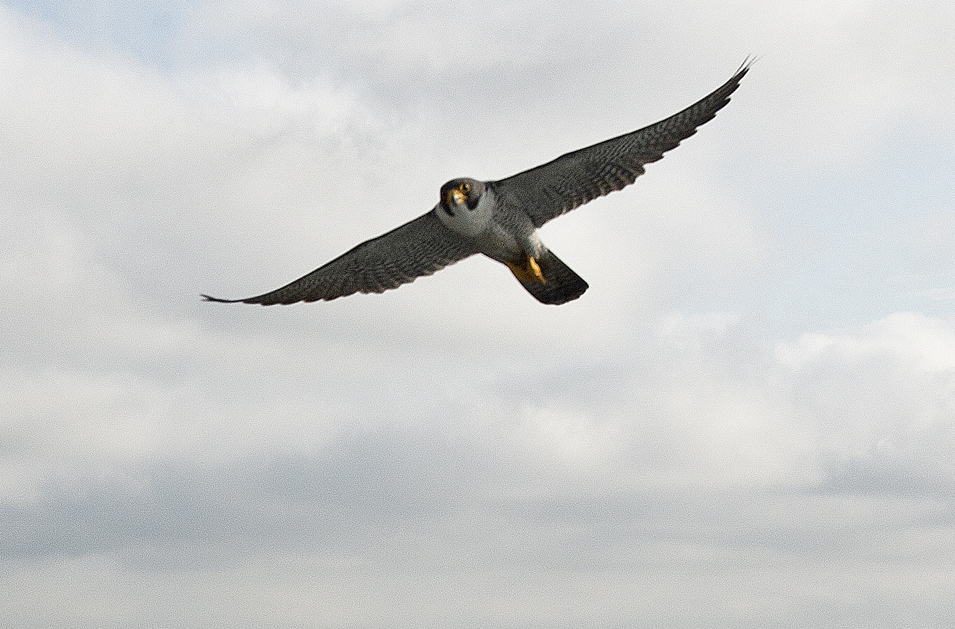 Raptors find a home in the city

“Of winged things the swiftest.”

So Homer characterizes birds of prey in the Odyssey. Indeed, the raptors evoke images of speed and untrammeled freedom as few other animals do: eagles soaring over mountain peaks, falcons diving from cliffs in pursuit of their prey, hawks plunging from the treetops, and owls silently cruising through otherwise impenetrable forests. Fleet and canny, these creatures are among those most associated with wildness. Their savage independence, their cryptic habits, and their virtuoso locomotion all set them apart from the pedestrian human world.

The average city-dweller might be justified in finding the birdlife they encounter on a daily basis drab by comparison. Portly pigeons decorating train platforms with their waste, scruffy house sparrows half-heartedly scattering upon approach … call them winged things the dullest. Interesting in their own way to be sure, these birds are hardly the stuff of poetry and grand metaphors.

Increasingly, though, urbanites would do well to revisit their dismissal of city birds. The chances that one of these more-familiar fowl will go up in a puff of feathers before their very eyes are on the rise. Raptors, as wild as they may seem, have shown an unexpected aptitude for the ways of the urban jungle. And cityfolk now have a ringside seat to the primeval practices that have made them the apex predators of the skies for millennia. 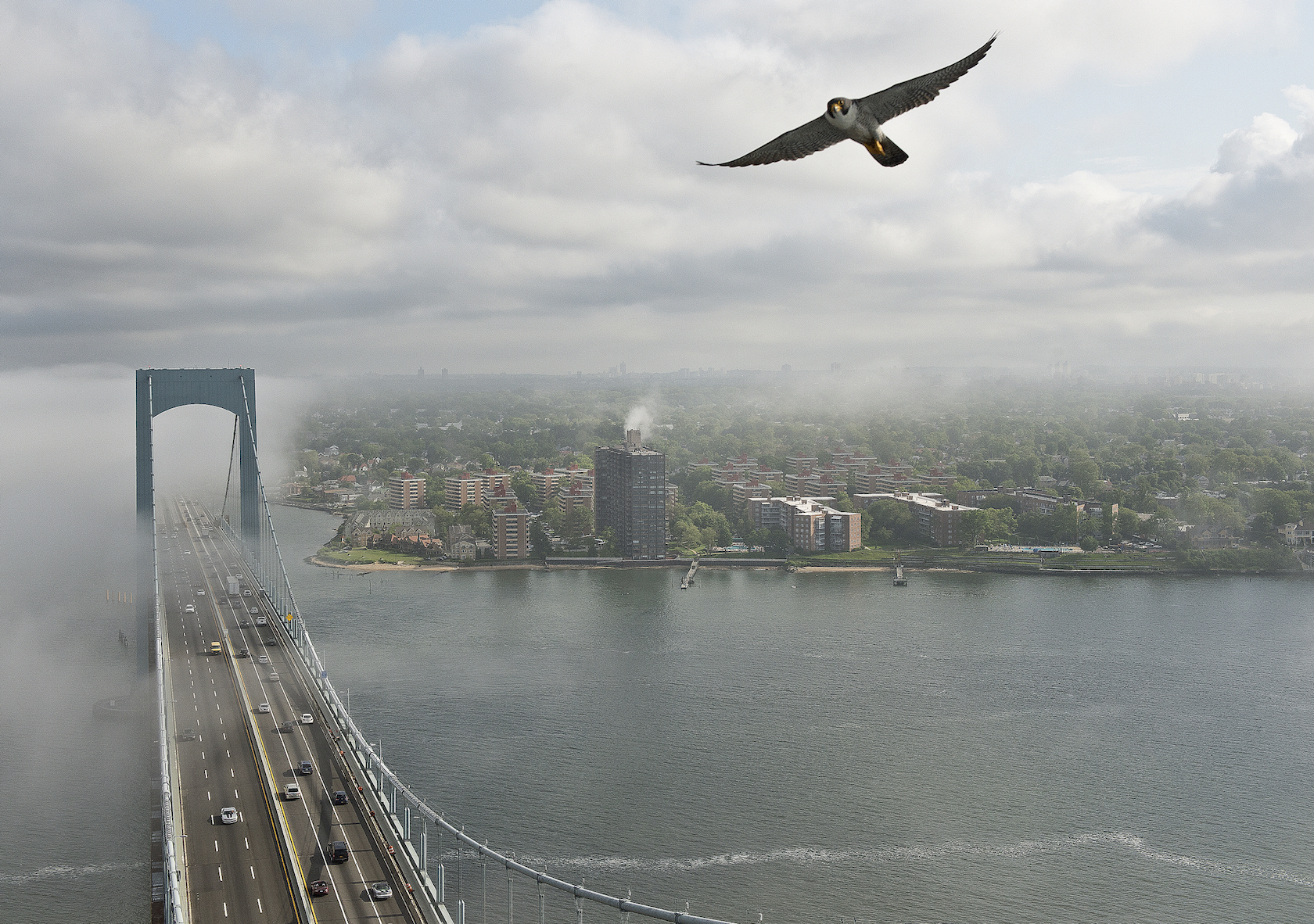 It is worth noting: the term “raptor” is actually a colloquial rather than a scientific term. Not all of the birds of prey that are referred to as raptors are closely related. Hawks, eagles, buzzards, and vultures belong to the order Accipitriformes. The falcons, however, once grouped with the hawks and eagles, are now placed in the order Falconiformes. They are thought to be more closely related to parrots than they are to hawks. The similarities between the two groups are a remarkable example of convergent evolution—the evolution of two types of organism to fill the same ecological role, thus resulting in similar traits. And the owls get their own order, the Strigiformes; they are most closely related to the nightjars and frogmouths. The reasons for their commonplace association are obvious: all are supremely adapted aerial predators, at the peaks of their respective food chains. With their hooked bills and intimidating talons, they look like cousins.

At least some members of each order have traded the wilderness for more cosmopolitan digs.

Perhaps the most well-known and widely distributed of these urbane avians is the peregrine falcon (Falco peregrinus). Already found on every continent except Antarctica, peregrines have found suitable proxies for the sheer cliffs that they favor in the skyscrapers of the modern metropolis. Peregrines saw major declines in their populations beginning in the 1950’s. This population crash saw its nadir in the 1970s; by the middle of the decade, North America had fewer than 700 birds. Ultimately attributed to the widespread use of organochloride pesticides such as DDT, which accumulated in prey items and caused the production of thin-shelled eggs, the species’ near extinction was reversed when the chemicals were banned and protection measures were put into place. The remnant population was supplemented by the reintroduction of more than 6,000 captive-bred individuals.

And it is this program that may, in North America at least, account for the species’ current proclivity for city living in some areas. Many of the fledgling peregrines were “hacked” in cities—that is, they were released, but fed until they learned to hunt on their own. (Hacking in wilderness areas saw heavy losses to other predators, absent or reduced in city environments.) As a result, the theory goes, these birds imprinted on the city landscape and thus considered it their natural environment. Successive generations bred amongst the topless towers of human hubris imprinted, too, and the populations settled in. (Peregrines were recorded as nesting on manmade structures as early as the Middle Ages, so they probably have some inherent affinity for them in the first place.) A 2016 study on Midwestern populations found that some 91% of birds fledged in the region came from urban nests. Many of the major cities in the United States now host peregrine populations, from New York to Chicago to Los Angeles. In the Big Apple, they’ve adopted the sleepless tendencies of its hominid habitues and learned to hunt at night, picking off disoriented migratory birds as they circle around the Empire State Building. Worldwide, they’ve found urban homes as well. They now nest on the Palace of Westminster in London, hunt among the towers of Sydney and Melbourne, and even cruise along the shimmering skyline of Kuala Lumpur.

Surprisingly, even the reclusive accipiters—the goshawks and sparrowhawks—have found their niche amongst the human hustle and bustle as well. Unlike the peregrines though, these shy forest birds prefer more-residential tree-lined streets that mimic their wooded haunts in wilder regions. In the United States, Cooper’s hawks (Accipiter cooperii) have become a common sight at bird feeders nationwide, where dismayed observers note their penchant for picking off unwitting visitors while they eat. Though some have expressed concern that this puts songbird populations at risk, experts note that this is a natural process and is unlikely to damage species as a whole. Those who wish to provide their warbling dinner guests with some protection are advised to move their feeders to areas adjacent to shrubs into which they can escape. 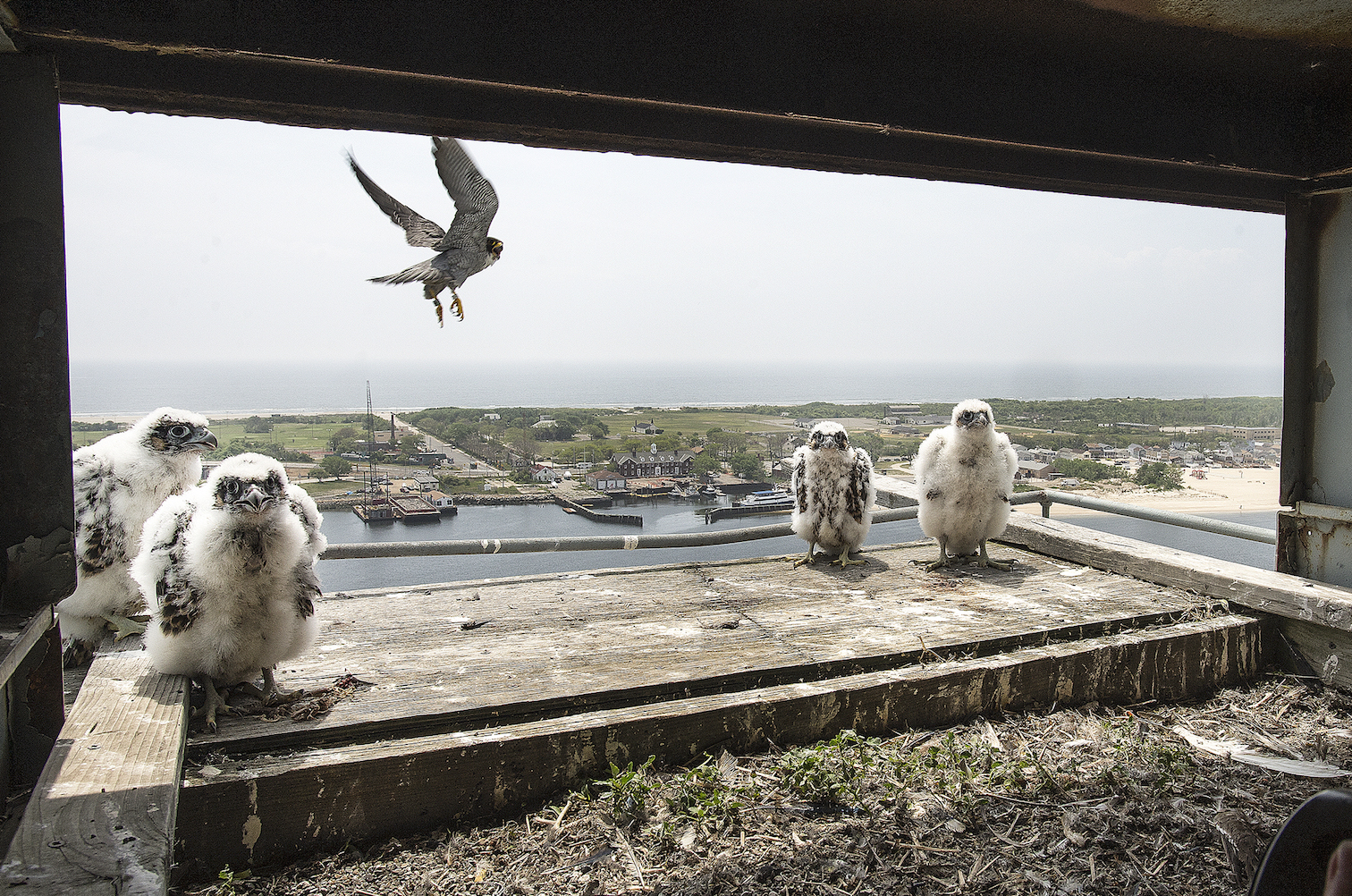 Other accipiters have learned to exploit human habitation, too. Crested goshawks (Accipiter trivirgatus) have staked out Hong Kong, one of the world’s most densely populated regions. Cape Town has a relatively new population of black sparrowhawks (Accipiter melanoleucus). And it’s not just free men who are citizens of Berlin, to paraphrase John F. Kennedy. The German capital is home to some 100 pairs of northern goshawk (Accipiter gentilis), a particularly shy species that, despite its preference for remote areas, seems to have adapted to the city’s louche environs.

The buteos and their kin haven’t ignored the siren call of the city, either. Pale Male, an unusually light-colored red-tailed hawk (Buteo jamaicensis) living in Manhattan, attracted an avid fanbase among New Yorkers and visitors stunned to see such a large bird of prey at home on Fifth Avenue. Since arriving in Central Park as a fledgling in 1991, he fathered some 30 chicks. There are now some 20 red-tail nests in Manhattan. Though some believe him to still be alive, 29 years would be extremely old for a wild red-tail and purported sightings likely refer to other hawks, perhaps his offspring. The unusually social Harris’s hawks (Parabuteo unicinctus), which hunt in groups and have been dubbed the “wolves of the sky,” have also taken to urban habitats with enthusiasm. They are frequently seen in cities in the southern United States, all the way down to South America, with notable populations in Phoenix, Tucson, Mexico City, Lima, and Buenos Aires.

Kites, too, have flourished in cities worldwide. Red kites (Milvus milvus) were recorded as thieving food from unsuspecting urchins in 16th-century London. The problem persists in contemporary Britain, where the birds have even tried to snatch small dogs. Black kites (Milvus migrans) swarm above cities in Asia, Africa, and Australia, where they are frequently attracted to garbage dumps. In Nairobi, it is feared that their abundance may drive off smaller raptors, such as the Ayre’s hawk eagle. Mississippi kites (Ictinia mississippiensis) are, by some estimates, the most successful raptors in American cities. In fact, human settlements have greatly expanded their range in the Great Plains, suggesting that these feathered origami creations possess a level of adaptability and resilience belied by their delicate appearance.

The aforementioned creatures have filled the daytime skies above the world’s cities, but the nighttime hours provide an entirely different set of circumstances against which some particularly tough owls have tested their mettle. Barred owls (Strix varia) are so numerous in Charlotte that the population served as the basis for the largest study yet conducted on the species. Apparently, the residential areas of the city adequately mimic the species’ preference for old growth forests with an open understory. Eastern screech owls (Megascops asio) can be found in cities throughout the eastern and middle portions of the United States and its western counterpart (Megascops kennicottii) has proven equally adept at city living on the opposite coast. In Australia, the rare powerful owl (Ninox strenua) has taken to the grove-like streets of such large cities as Sydney and Melbourne with unexpected aplomb.

So what allows these fantastical predators to persist in the oft-times hostile environments created by humans? For one, the easy availability of food in the form of urban exploiters such as mice, rats, and pigeons. A seemingly endless supply of these creatures, usually viewed as pests, is likely an attractant for many species. Others are drawn by human refuse, particularly in cities with open dumps. (Even bald eagles aren’t beneath a little trash picking.) In setting up our cities, we have unintentionally mirrored the wild habitats of some raptors as well. The sheer faces of skyscrapers mimic the cliffs preferred by peregrine falcons, and tree-lined residential streets create habitats not unlike certain forests, with dense canopies and open space at the ground level, allowing for easy maneuvering to capture prey. In some cases, the move to the city may be driven by necessity … the recent drought in Australia has resulted in 27 of the country’s 34 native raptors being spotted in the country’s regional capitals during annual bird counts. The artificial conditions of the city have combined to lend some species a reproductive advantage, allowing for earlier breeding and the production of more offspring.

Not all have reaped those benefits though. Some have seen declines in breeding performance and even those that produce more young may ultimately fledge fewer of them. It has been hypothesized that, in fact, urban environments may represent ecological sinks for many species. The conditions seem appealing on the surface … plentiful prey, a surfeit of available habitat, reduction of predators. But other conditions may offset these benefits and ultimately harm a species. For example, one population of Cooper’s hawks saw rates of nestling mortality as high as 40% due to their susceptibility to trichomoniasis, a protozoan disease carried by the doves and pigeons comprising a large portion of their diets. The easy availability of food may also reduce territoriality in this species, allowing for atypical mating behaviour in which the normally monogamous species will engage in “infidelity,” a behavior with unknown consequences. A 2009 study found that window strikes, automobile collisions, and electrocutions accounted for high proportions of the mortality events in urban raptors. And poisoning due to the capture of animals that have ingested rodenticides or accumulated lead add further risks to the seeming bounty of the city.

While the full consequences of urban life for raptors are not yet fully understood, their accessibility to ornithologists has made them a rich area of study. And their proximity to nature-starved human residents has facilitated a resurgence of popular interest, as attested by the thousands of views received by “nest cam” sites live streaming the behavior of nestlings perched on skyscraper ledges and bridges. Fixtures in ancient myth, these birds are primed for entry into the modern urban legendarium. Take Pale Male: probably long dead, this individual hawk has already achieved immortality in the New York imagination. It is only a matter of time before he is joined by peregrines, Cooper’s hawks, and powerful owls on the present-day avian Olympus.