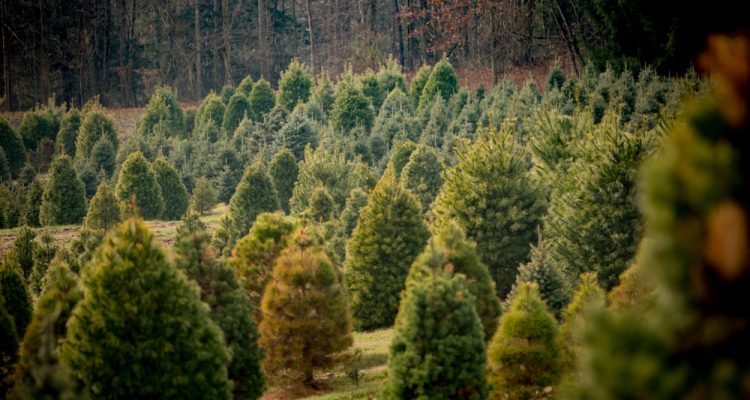 This holiday season, a few families will be rockin’ around the stolen Christmas tree. Theft of Christmas trees is a growing problem, and at a woodland park in Scotland, it meant the death of five “extremely rare” Serbian conifers.

Kinnoull Woodland Park, just across the River Tay from Perth, Scotland, is home to hundreds of trees, an arboretum full of specimens that can be planted in the garden, and miles of trail.

It is also the site of a project by the Perth and Kinross Countryside Trust to protect threatened conifers – evergreen trees like cedars, firs, pines, and junipers – from extinction.

Last week, thieves stole five of those rare trees, specimens of the species Picea omorika. Officials said that although it appears they tried to dig up the five spruces, most of the roots were left behind and the trees were probably killed.

“Until these trees were stolen, we probably had the greatest concentration of these trees outside of their native range,” PKCT Project Officer Tim Christian said in a statement on the organization’s website. “Because of the nature of these collections, the trees are irreplaceable: there is no way to recover the missing genetic material.”

Each of the trees was grown from seed collected from the species’ native range in Serbia, and represents years of work, he said.

Collecting these particular seeds involved traveling to remote locations, and often climbing steep trails or rock faces to ensure a wide variety of genetic material for the Perthshire Big Tree Country Conifer Conservation Programme. The program then sends seeds back to programs in each tree’s native range so that each species can be preserved in its home country.

While it’s rare for Christmas tree thieves to target priceless specimens from conservation projects, the theft of Christmas trees is not a new problem.

In a surprisingly similar case the Kinnoull Woodland Park theft last week, two valuable trees were swiped from Cornell Botanic Gardens in 2014 – and it wasn’t the first time.

“We know from past history that from around Thanksgiving to Christmas time, from time to time, we have trees stolen,” gardener Phil Syphrit told The Ithaca Voice at the time.

One of the trees was a 20-foot spruce, and the other was a 3-foot red cedar. Syphrit believed the trees were stolen to serve as Christmas trees, he told the newspaper, and Cornell University seemed to agree.

“[Cornell Botanic Gardens] collections have been carefully cultivated to provide visitors with a world class public garden experience.  When a tree or plant is lost to theft it is like losing a unique work of art,” a statement from the university read. “Please go to your local Christmas tree stand to purchase a tree that was harvested for this purpose.”

The same year, a Maine Christmas tree farm reported the theft of more than 30 trees over several days, and a club in Georgia that fundraises for children with illnesses and youth sports teams with a Christmas tree sale was the victim of a nearly 50-tree heist.

Last year, a thief in Waterbury, Conn. made off with 10 trees from a lot at Saints Peter and Paul School in two separate thefts. The stolen trees were intended for a school fundraiser.

In most cases, though, these kinds of crimes rarely shatter the Christmas spirit.

In the U.S., Christmas tree farms don’t report many thefts, said High Whaley, spokesman for the National Christmas Tree Association. There might be the occasional theft from a lot or a farm, he said, but the NCTA hasn’t heard of anything on a larger scale.

Not all wood poaching is for so innocent a reason as cutting down an evergreen to celebrate the Christmas season, however. In California and the Pacific Northwest, “burl poaching” has become a major problem in old growth redwood forests.

Burl poachers cut large portions out of the trunks of redwood trees, then sell the wood to furniture makers and other artisans. The swirls of the wood grain and large size of old-growth redwood burls make them particularly attractive to poachers. Cutting them out can badly damage a tree and sometimes lead to its death.

In 2015, four men were accused of illegally cutting down old-growth maple trees in Washington state and using it to produce and sell high-priced musical instruments.

Officials estimate about 1,000 cords of wood or more are illegally logged in the Santa Cruz Mountains of California each year.

Some parks are taking unique approaches to combatting wood poaching. In 2014, the Redwood State and National Parks in California gated one of the main roads through the park and began closing it each night, after several burl poaching incidents.

At the Kinnoull Woodland Park program, officials are now weighing the use of surveillance cameras to protect their trees.