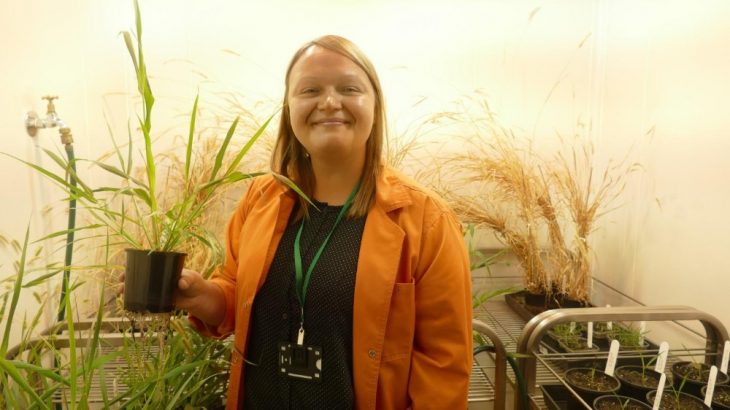 Researchers discover how to boost photosynthesis

An international team of researchers based in Australia have struck upon a discovery that could revolutionize food production: how to boost photosynthesis in plants.

Led by Dr. Maria Ermakova of the ARC Centre of Excellence for Translational Photosynthesis, the team found that a specific protein controls the rate of electron flow in photosynthesis – the process that allows plants to use sunlight to turn carbon dioxide and water into food. Increasing the amount of that protein in plants can speed up that process.

“We tested the effect of increasing the production of the Rieske FeS protein, and found it increases photosynthesis by 10 percent,” Ermakova said.

The protein is part of a complex system that she described as similar to a hose.

“By overexpressing this protein, we have discovered how to release the pressure of the hose, so more electrons can flow, accelerating the photosynthetic process,” she said.

The discovery could have a massive impact on agriculture and food production, particularly among plants that use what scientists have dubbed C4 photosynthesis, such as maize and sorghum. These staple crops are already among the most productive in the world. If scientists can boost photosynthesis, that could mean higher crop yields.

The process has been tested on a plant called Setaria viridis, a C4 plant closely related to maize and sorghum. The tests showed that boosting production of the Rieske FeS protein led to faster photosynthesis.

“It is an important proof of concept that helps us enormously to understand more about how C4 photosynthesis works,” said Dr. Susanne von Caemmerer, a co-author of the study and deputy director of the ARC Centre of Excellence for Translational Photosynthesis.

The team is now ready to test the process on sorghum, she said.

The researchers from all over the world have spent decades essentially “breaking” plants so that they could figure out potential ways to boost photosynthesis, according to Dr. Robert Furbank, the centre’s director.

“However, this is the first example in which we have actually improved the plants,” he said.

The researchers plan to study other parts of the complex that includes the Rieske FeS protein, to see whether they can boost the photosynthesis process even more.

The study adds to other new research on photosynthesis, including the discovery that the process can be altered so that plants need less water.

It has been published in the journal Communications Biology.