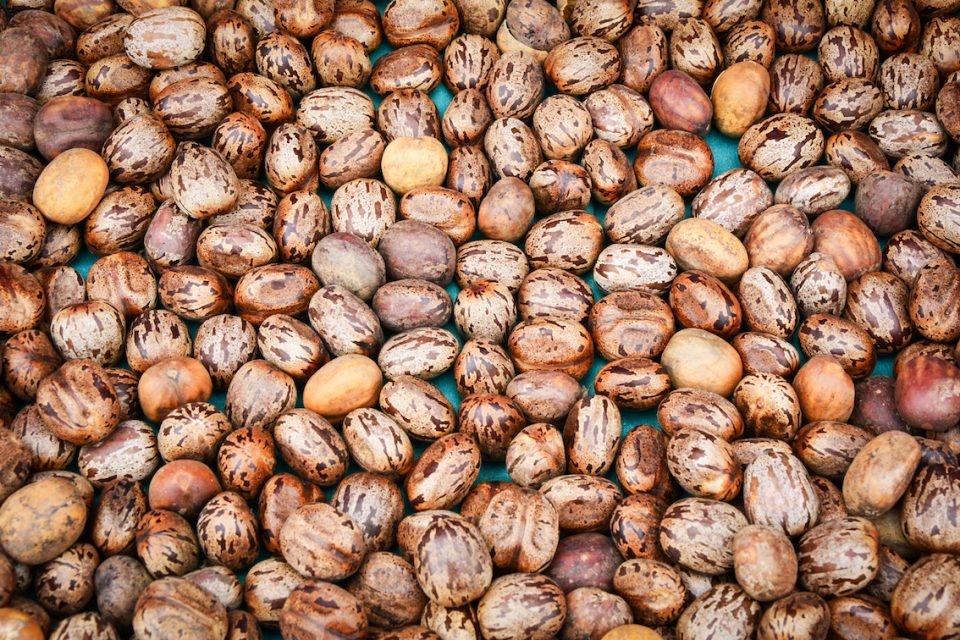 They say letter writing is a lost art. But a few mentally unstable individuals keep it alive and… interesting. It’s not their scintillating prose or florid penmanship, though, that sustains the epistolary tradition. With a simple dash of white powder, once a year or so, these troubled correspondents bring the quaintest form of communication back into the news for all the wrong reasons.

Sometimes they get really ambitious and season their greetings with anthrax, but easier to come by is ricin, a poison made from the castor bean (Ricinus communis). It’s Latin name, bestowed by Carl Linnaeus, means “tick,” a reference to its prickly fruiting bodies. Though called a “bean” it is not actually a legume; it is in the family Euphorbiaceae. The plant that produces the seed, a common ornamental native to Africa and Asia, can be grown in any old backyard and the process of refining the deadly lectin for which it is known only requires a few easily available ingredients. Patented by the U.S. Army in 1962, the recipe is still easily found online. Farm to table, indeed.

These attempts at murder by mail would be more troubling if these poison pen pals were more competent. But oftentimes their attempts to distill the poison meet with limited success. In 2018, one would-be assassin even tried sending crushed castor beans to President Donald Trump and Senator Ted Cruz without even having tried to isolate the poison they contained. The seeds are only toxic if ingested and it would take more than a few to have any serious effect on most people.

Though ricin is certainly toxic when inhaled, it must be in a very finely ground powder to have significant effect. Ten to twenty micrograms per kilogram of body weight are potentially lethal when inhaled or injected. The purified poison is also effective if ingested; one to twenty milligrams per kilogram can kill a person. If administered in adequate doses, it is among the most potent known poisons. However, while it can irritate the skin, it doesn’t absorb through the epidermis particularly well. In 1991, a homegrown terrorist cell in Minnesota planned to use dimethyl sulfoxide, a solvent, to facilitate the absorption of ricin through the skin of its victims when they touched contaminated door handles. It wouldn’t have worked. The molecules of ricin are too large.

The symptoms of ricin poisoning—ricinosis—vary according to the method of administration. If untreated, all can be fatal if sufficient amounts of the toxin are absorbed. When inhaled, ricin causes coughing, difficulty breathing, and fluid accumulation in the lungs, and can culminate in respiratory failure. When ingested, nausea and vomiting are common, as is diarrhea. This can result in dehydration. The heart rate may be elevated and seizures may be experienced. Further, the liver, kidney, and spleen may shut down, leading to death. Symptoms of the injected poison are similar. Victims usually begin feeling the effects within a few hours, though it make take up to 12 in some cases. Death usually occurs within three days.

Discovered in 1888 by German researcher Peter Hermann Stillmark, ricin is a glycoprotein lectin composed of two parts, an A chain and a B chain, connected by a disulphide bond. The B chain attaches to carbohydrate receptors expressed on the surface of a cell, accounting for the poison’s unique mechanism of action. In addition to causing the agglutination, or clumping, of red blood cells, liver cells, and skin cells, killing them, it also facilitates the entry of the A chain into the cell to which it attaches.

Once inside, the A chain wreaks havoc. It shears off an adenine base from a ribosome, inactivating it and making it incapable of protein synthesis. It then moves on to the next ribosome and can do the same to some 1,500 of them in a single minute. A single molecule of ricin is capable of killing a cell. This mechanism is shared by other ribosome-inactivating toxins such as Shiga toxin, from the Shigella dysenteriae bacteria. While Stillmark was the first to have noted the agglutinating properties, a toxic mechanism observed as early as 1860 when rattlesnake venom was introduced to pigeon blood, it wasn’t until 1987 that the ribosome-inactivating function was pinpointed.

While there is no generally effective antitoxin, supportive measures often save victims’ lives if initiated early enough. Those who have ingested the poison are typically subjected to gastric lavage, especially if they have not already vomited. Steroids may be administered to reduce inflammation and supplementary fluids can mitigate the effects of dehydration. Breathing support may also be provided. Antibody therapies are moving closer to production, though they would need to be administered soon after exposure to be effective. At least one vaccine is awaiting approval for use in humans.

Interestingly, ricin was among the first substances to be tested in the pioneering field of immunology. In 1891, Paul Ehrlich began administering small doses of ricin to mice, increasing them over time until the animals had built up a tolerance to the substance. He measured the quantities of what he termed antibodies (Antikörper) in the animals’ blood and determined that their bodies were responding to and neutralizing the poison. His work was highly influential on the fledgling field of immunology.

Ricin is, of course, far more well-known for its malign uses. Beginning in 1918, the U.S. War Department began investigating the possibility of employing ricin in warfare, either as a coating for bullets or as a dust cloud. Ricin, however, deteriorates when heated and the bullet idea was scrapped. The dust was never deployed, as it was feared that it might affect U.S. troops and there was no antidote. Nonetheless, research continued into World War II and bombs containing ricin were tested at the Dugway Proving Grounds in Utah in 1944. They were never used in battle. By 1972, the poison had been designated a schedule 1 toxic chemical by the Biological Weapons Conference and was thus deemed illegal to use in warfare. It was, nonetheless, possibly used by Iraq in the 1980s and was discovered in Afghanistan following the fall of the Taliban in 2001.

Though it never gained much traction as a large-scale weapon, the use of ricin to assassinate individuals has persisted—with varying success. Perhaps the most famous of these incidents occurred in 1978. Bulgarian dissident Georgi Markov was walking to a bus stop in London when a man jabbed him in the leg with an umbrella. The next day, he fell ill and was transported to a hospital. Despite his claim that he had been shot by a poison bullet, no diagnosis was made and three days later, he died. A post-mortem examination discovered a small platinum-iridium sphere, formerly a watch bearing, that had been filled with an unknown substance. Comparison of Markov’s symptoms with those experienced by a pig injected with ricin corroborated his claims of having been poisoned.

Two Soviet defectors later confirmed the involvement of the KGB and a stockpile of weaponized umbrellas was later discovered in the offices of the Bulgarian interior ministry. Two weeks prior, another Bulgarian dissident, Vladimir Kostov, had been shot in the back in Paris with a similar pellet fired by a contraption hidden inside a briefcase. After hearing about Markov’s death, he went to the hospital and the pellet was extracted. It was found to contain ricin. A wax coating that was supposed to dissolve upon entry to his body had remained mostly intact, keeping the poison from entering his body and thus saving his life. Three years later, an attempt was made on the life of Polish double agent Boris Korczak using the same method.

Poisoned epistles, with their lower overhead and ease of delivery, have proven even more popular than the James Bond-style gadgets of the Cold War. In October and November 2003, two threatening letters were detected by law enforcement; one was headed for the White House. Written by a person using the pseudonym Fallen Angel, they claimed that if trucking regulations that reduced the time a driver could spend behind the wheel were not repealed, ricin would be used to turn Washington, D.C. into a “ghost town.” Both letters contained vials of ricin. The culprit was never discovered.

In April 2013, a Mississippi tae kwon do instructor attempted to frame his enemy, an Elvis impersonator, by sending envelopes of ricin to a local judge, Senator Roger Wicker, and President Barack Obama. His version of ricin, however, contained less than 1 percent of the toxin. Amusingly, he was a member of Mensa. A scant month later, actress Shannon Richardson was arrested for having mailed ricin to Obama, then-New York City mayor Michael Bloomberg, and Mark Glaze, an anti-gun activist. She had been attempting to frame her estranged husband. And in 2017, a Vermont retiree, taking a more direct route, was arrested after confessing that she had tested ricin on her fellow residents at an assisted living facility, ultimately hoping to use it on herself.

For all of its use in spycraft and murder plots, ricin has actually shown promise as a cancer treatment. By modifying the type of receptors to which it binds, researchers have successfully induced it to selectively kill cancer cells. But for now, ricin remains the ultimate sign-off for homicidal scribes.