Could scorpion toxin be the key to non-addictive pain killers? • Earth.com 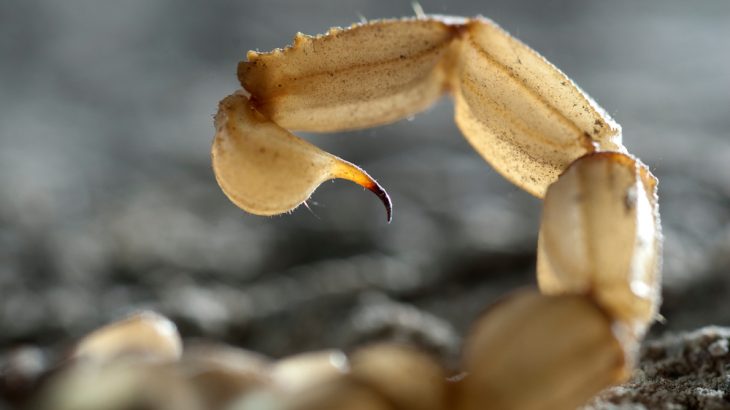 Could scorpion toxin be the key to non-addictive pain killers?

Scorpion toxin – specifically, a chemical isolated from the venom of the Australian Black Rock scorpion – could be the key to understanding chronic pain. It might even help scientists develop non-addictive treatments for it.

The toxin activates a protein in the brain that researchers have dubbed the “wasabi receptor.” It got the name because certain spicy foods, including wasabi, mustard, onions and ginger, also activate the TRPA1 protein.

A team of researchers from the University of California, San Francisco and the University of Queensland set out to see if there was an animal venom that might also activate the protein. They found it in the Australian scorpion toxin.

“Think of TRPA1 as the body’s ‘fire alarm’ for chemical irritants in the environment,” UCSF doctoral student and lead author John Lin King said in a press release. “When this receptor encounters a potentially harmful compound – specifically, a class of chemicals known as ‘reactive electrophiles,’ which can cause significant damage to cells – it is activated to let you know you’re being exposed to something dangerous that you need to remove yourself from.”

The TRPA1 protein can also be triggered by environmental pollutants like cigarette smoke, the researchers said. In that case, the protein reaction is in the cells that line the airway, and can cause coughing and airway inflammation.

The scorpion toxin that triggers the protein only seems to do so in mammals, according to the researchers, although all animals have some form of the TRPA1 protein. Since the Black Rock scorpions don’t hunt mammals, it’s likely the toxin is defensive. That may be the case for plants like garlic and ginger, too.

The scorpion toxin has some other unusual properties: it can “force” its way through the cell wall rather than being checked by the normal processes that protect cells from invaders. That could offer a unique insight into someday treating chronic pain and inflammation.

“It was surprising to find a toxin that can pass directly through membranes. This is unusual for peptide toxins,” Lin King said. “But it’s also exciting because if you understand how these peptides get across the membrane, you might be able to use them to carry things – drugs, for example – into the cell that can’t normally get across membranes.”

The pain response from the scorpion toxin also does not trigger inflammation. That may eventually help researchers figure out how to stop the inflammatory response that’s often triggered by chronic pain.

“The discovery of this toxin provides scientists with a new tool that can be used to probe the molecular mechanisms of pain, in particular, to selectively probe the processes that lead to pain hypersensitivity,” Lin King said. “And for those interested in drug discovery, our findings underscore the promise of TRPA1 as a target for new classes of non-opioid analgesics to treat chronic pain.”

The study has been published in the journal Cell.