Study explains the absence of super-Earths in our solar system • Earth.com 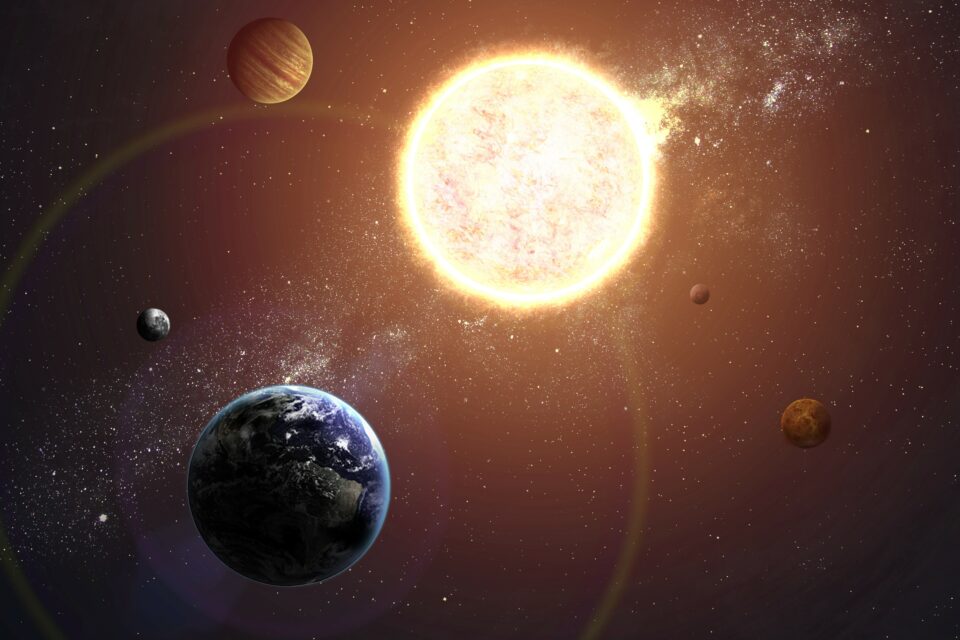 Super-Earths are planets of up to ten times the size of Earth and they are commonly found in orbit around many stars in our galaxy but, perplexingly, not in our own solar system.

“In the solar system, something happened to prevent the Earth from growing to become a much larger type of terrestrial planet called a super-Earth,” said Rice University astrophysicist André Izidoro, referring to the massive rocky planets seen around at least 30 percent of sun-like stars in our galaxy.

Izidoro and colleagues have recently produced a model that simulates the solar system’s early formation and makes use of astronomical observations that reveal the presence of protoplanetary discs of dust particles, formed into rings around young stars. These rings look like the bands of dust and gas that currently surround the planet of Saturn, and the scientists’ model proposes that similar rings were present around the sun before any of the planets formed.

The study was conducted by astronomers, astrophysicists and planetary scientists from Rice, the University of Bordeaux, Southwest Research Institute, and the Max Planck Institute for Astronomy. The team made use of a supercomputer to run the simulation hundreds of times in order to draw conclusions about how the planets in the solar system formed. The results were published recently online in the journal Nature Astronomy.

In their model they assume the presence of rings of dust and early matter around the young sun, instead of a single, continuous disk. These rings would have been created by “pressure bumps” at particular distances from the sun. Similar pressure bumps have been observed in ringed stellar disks around distant stars, and the study explains how pressure bumps and rings could account for the fact that there are no super-Earths in the solar system.

The scientists state that dust piles up at the bumps and forms three rings of planetismals (tiny lumps of matter or mini planets that can combine later). The inner ring is narrow and forms at around 1 au (astronomical unit – approximately the distance from Earth to the sun), while the next ring is wider and lies between 3 and 20 au from the sun. The third and most distant ring lies between 20 and 45 au. The matter present in the rings is what is available to combine into larger bodies, such as asteroids, planetismals and planets.

“If super-Earths are super-common, why don’t we have one in the solar system? We propose that pressure bumps produced disconnected reservoirs of disk material in the inner and outer solar system and regulated how much material was available to grow planets in the inner solar system,” said Izidoro.

In the past, scientists believed that gas and dust in protoplanetary disks gradually became less concentrated as the distance from the central star increased. But computer simulations show planets are unlikely to form in these smooth-disk scenarios.

“In a smooth disk, all solid particles – dust grains or boulders – should be drawn inward very quickly and lost in the star,” said astronomer and study co-author Andrea Isella, an associate professor of physics and astronomy at Rice. “One needs something to stop them in order to give them time to grow into planets.”

Isella said astronomers have observed pressure bumps and protoplanetary disk rings with the Atacama Large Millimeter/submillimeter Array, or ALMA, an enormous 66-dish radio telescope that came online in Chile in 2013.

“ALMA is capable of taking very sharp images of young planetary systems that are still forming, and we have discovered that a lot of the protoplanetary disks in these systems are characterized by rings,” Isella said. “The effect of the pressure bump is that it collects dust particles, and that’s why we see rings. These rings are regions where you have more dust particles than in the gaps between rings.”

In the model, the researchers propose that pressure bumps formed in the early solar system at three distances where sunward-falling particles would have released large amounts of vaporized gas. These locations correspond with temperatures at which certain substances undergo sublimation (change state from solid directly to gas).

“It’s just a function of distance from the star, because temperature is going up as you get closer to the star,” said geochemist and study co-author Rajdeep Dasgupta, the Maurice Ewing Professor of Earth Systems Science at Rice. “The point where the temperature is high enough for ice to be vaporized, for example, is a sublimation line we call the snow line.”

In the model’s simulations, pressure bumps at the sublimation lines of silicate, water and carbon monoxide produced three distinct rings. At the silicate line, the basic ingredient of sand and glass, silicon dioxide, sublimated and became vapor. This produced the sun’s nearest ring, where Mercury, Venus, Earth and Mars would later form. The middle ring appeared at the snow line, where ice sublimates, and the farthest ring formed at the carbon monoxide line.

Because protoplanetary disks cool with age, the sublimation lines would have moved closer to the sun. This would have allowed dust to accumulate into asteroid-sized chunks, called planetismals. Although previous studies assumed planetesimals could form if dust were sufficiently concentrated, no model offered a convincing theoretical explanation of how dust might accumulate.

The model successfully predicts certain features of the solar system that have been inadequately addressed, or missed, by many previous models. These features include:

According to the authors of the study, their model enables scientists to follow the evolution of the innermost ring and show how it can explain the orbital structure of the four planets closest to the sun. The model shows that the central ring contains enough mass to support the rapid growth of the cores of the giant planets, including Saturn, Neptune and Uranus. And lastly, the outermost ring is consistent with the hypothesis that the early Solar System had a primordial planetesimal disk beyond the current orbit of Uranus.

In conclusion, Izidoro finds that there are probably no super-Earths in the solar system because there was not enough dust and other matter in the rings around the young sun to support the formation of very large, Earth-like planets. The bands of dust and gas thus played a determining role in the formation of Earth as we know it.