Sunflowers face east to get more attention from bees • Earth.com 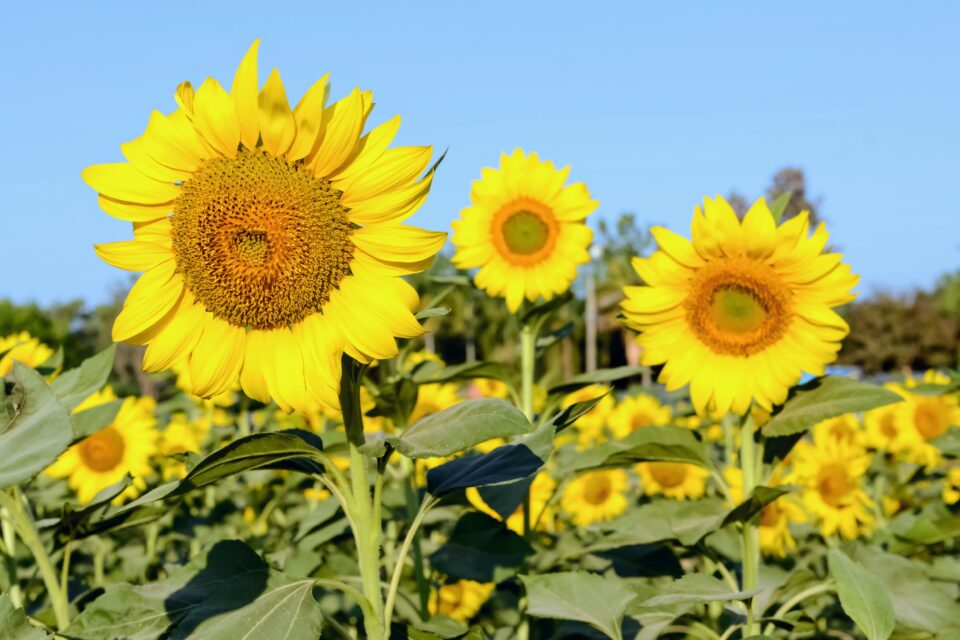 Sunflowers face east to get more attention from bees

Anyone who has watched sunflowers grow in their garden is familiar with how they turn – facing east in the morning and slowly tracking the sun until they are looking westward in the evening.

Previous research has shown how they do this – the plant’s internal circadian rhythm regulates its behavior. But now, a team of scientists at UC Davis has uncovered why. It appears the reason is closely related to something all organisms must do – reproduce.

“It’s quite striking that they face east,” said study senior author Professor Stacey Harmer. “It’s better for them to face east, as they produce more offspring.”

The researchers rotated several sunflowers around, moving some to face west and others east. They also planted sterile seeds next to plants facing both east and west with the intent to genotype which group pollinated the seed.

The experts found that the east-facing plants attracted more attention from bees – pollinators vital to sunflower reproduction. Plants facing the rising sun also produced larger seeds and released more pollen – incidentally, much of that pollen from the east-facing sunflowers made it to the sterile seeds.

The direct sunlight also influenced the shape and structure of immature sunflowers, making them more readily accessible to pollinators.

The reason for the sun-tracking plants’ reproductive success is likely tied to temperature, as the east-facing flowers soaked in more heat, something that must have been attractive to the bees. The warmth likely helped the ectothermic bees thermoregulate early in the morning.

The study also revealed that sunflowers release more pollen when the temperature is higher. The researchers placed a heater next to westward-facing plants and found that they released just as much pollen as the east facing plants.

Furthermore, the direct ultraviolet light from the sun’s rays gives off colors only bees can see, making the sun-facing plants even more enticing. To sum it up in Dr. Harmer’s words “It’s better for them to face east, as they produce more offspring.”