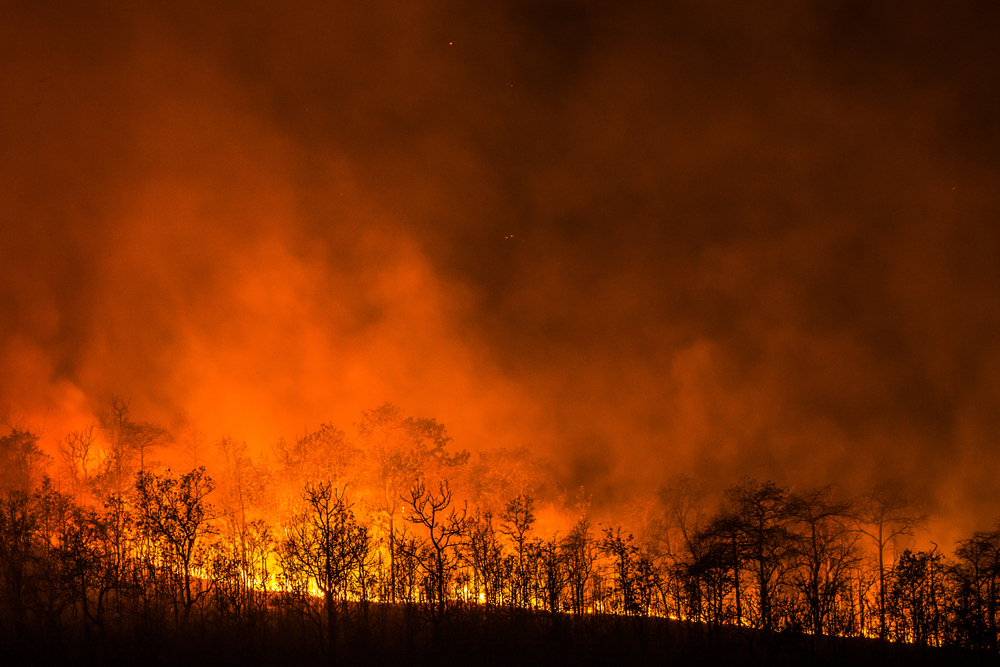 Tennessee wildfires killed at least four and forced thousands to flee for their lives as the firestorm engulfed the town of Gatlinburg late Tuesday and early Wednesday.

“I have been watching the terrible fires in the Great Smoky Mountains and I am heartbroken,” Parton said in a statement released by her public relations firm. “I am praying for all the families affected by the fire and the firefighters who are working so hard to keep everyone safe.”

As of Wednesday morning, Dollywood and Pigeon Forge had been spared the brunt of the Tennessee wildfires damage.

Gatlinburg was not so lucky.

The Tennessee wildfires roared into the town with little warning on Tuesday evening, charring buildings into embers and forcing residents to flee with nothing but the clothes they wore.

Several of the town’s residents have been reported missing, though an exact number is not available at this time.

The Tennessean shared harrowing video from stepbrothers Michael Luciano and Anthony Fulton, who literally fled for their lives as fire blazed on all sides and even in front of them. At one point, they were nearly trapped when a tree fell, but they were eventually able to get through.

Guests were also trapped for hours in the Gatlinburg Park Vista hotel as the fire raged around the building, but firefighters were able to keep them safe until they could be evacuated early Wednesday morning.

Meteorologists at Accuweather.com, a private forecasting firm, were expecting a thunderstorm to bring rain to the area on Wednesday evening. However, it could also bring more high winds and lightning, upping fire risk.

It may be the last rain in the region for a while, said Dr. Luigi Romolo, regional climatologist at the Southern Regional Climate Center based at Louisiana State University.

“Across the South, there is no real trend in the forecast for precipitation over the next few months,” he said. That means a few more months of a drought that has created ideal conditions for the spread of wildfires.

The fires in the Great Smoky Mountains have been burning for weeks. As of November 30, they had burned more than 149,000 acres across eight states, according to the National Wildfire Coordinating Group’s incident reporting system.

“Drought is actually a regular occurrence of climate,” Romolo said. However, drought combined with warmer than usual temperatures, which the south has been experiencing since late summer, can create extremely dry conditions that provide fuel for fires.

“Warmer temperatures create a greater demand for water from the ground. If it’s not raining, you’re not replenishing that water, and over time, plants and shrubs are going to suffer,” Romolo said.

Severe drought has plagued the areas worst-affected by the fires for months, according to the United States Drought Monitor: eastern Tennessee, western North Carolina and South Carolina, and northern Georgia and Alabama. Fires are also burning in Kentucky, Virginia and West Virginia.

Still, it’s too soon to tell whether the drought and Tennessee wildfires are part of any wider pattern of climate change. Drought does happen naturally without any outside forces, Romolo pointed out, just as unusual amounts of rainfall can.

Investigators believe most of the fires burning throughout the South, including the one that roared through Gatlinburg, are “human-caused,” though that can mean anything from an improperly quenched campfire or cigarette tossed out of a vehicle to intentional arson.

The Tennessee Bureau of Investigation has launched a hotline for residents who were separated from their loved ones during the escape or who cannot get ahold of family and friends in the area: 1-800-TBI-FIND (1-800-824-3463).

The East Tennessee chapter of the American Red Cross and the Community Foundation of Middle Tennessee are working to help the residents and towns affected by the fires.