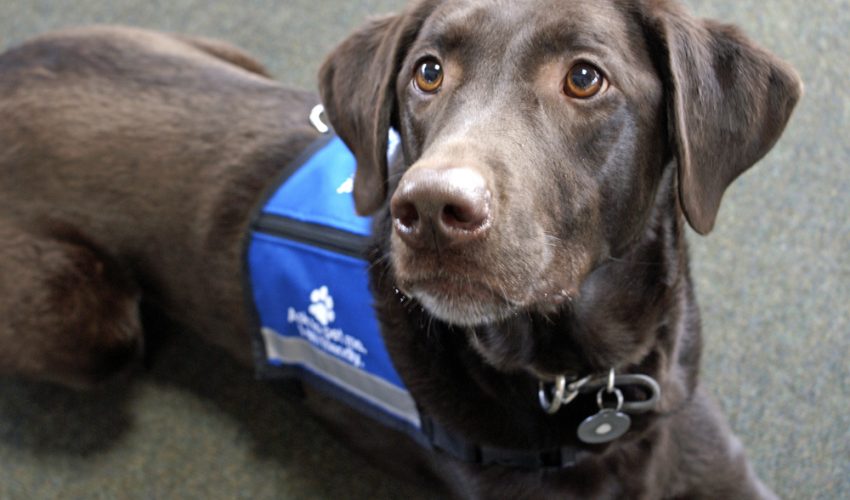 Midterms are right around the corner, and then the grind toward finals, summer classes, internships and more begins. Needless to say, it’s stress season for college students. Time to bust out the secret weapon against stress: therapy dogs.

A new study, led by Emma Ward-Griffin, a research assistant at the University of British Columbia, looked at how spending some facetime with a therapy dog affected students’ stress levels.

“Therapy dog sessions are becoming more popular on university campuses, but there has been surprisingly little research on how much attending a single drop-in therapy dog session actually helps students,” she said in a press release.

The team of psychology researchers surveyed more than 240 students who took advantage of drop-in sessions with therapy dogs. The students filled out questionnaires before, immediate after, and 10 hours after their sessions.

The study participants reported feeling happier and much less stressed after spending time with the therapy dogs, and reported higher levels of energy and happiness than a control group that didn’t visit with the dogs.

“Our findings suggest that therapy dog sessions have a measurable, positive effect on the wellbeing of university students, particularly on stress reduction and feelings of negativity,” Ward-Griffin said.

The benefits didn’t appear to favor one gender or other group of students. Instead, the positive effects of pup therapy were pretty evenly spread among the participants, the researchers said.

Some effects of the sessions lasted, such as feeling less stress and more supported, but the happiness and life satisfaction faded after several hours.

“These sessions clearly provide benefits for students in the short-term, so we think universities should try to schedule them during particularly stressful times, such as around exam periods,” senior author Dr. Frances Chen said. “Even having therapy dogs around while students are working on their out-of-class assignments could be helpful.”

The study has been published in the journal Stress and Health. Funding was provided by the Social Science and Humanities Research Council of Canada.