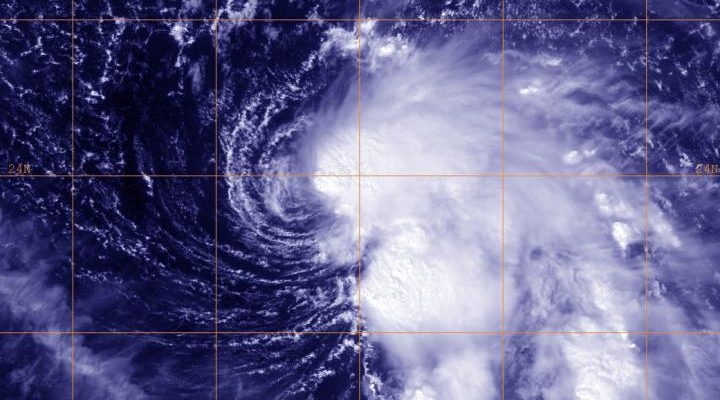 An image of newly formed Tropical Storm Nicole in the Atlantic Ocean was taken by NOAA’s GOES-East satellite on Oct. 4 at 12:45 p.m. EDT. The imagery showed that the low-level center is near the western edge of the strongest thunderstorms.

As cruise ships maneuver away from Hurricane Matthew, now there’s another tropical cyclone to avoid in the western Atlantic Ocean.

National Hurricane Center forecaster Richard Pasch said, “The cloud pattern associated with the low pressure system to the northeast of Puerto Rico has become better organized, with some banding features having developed over the eastern portion of the circulation, and ASCAT data indicates that the circulation is now well-defined.”

At 11 a.m. EDT (1500 UTC) on Oct. 4 the center of Tropical Storm Nicole was located near 23.8 degrees north latitude and 60.4 degrees west longitude. That’s about 525 miles (840 km) northeast of San Juan, Puerto Rico. Nicole was moving toward the northwest near 8 mph (13 kph) and a turn toward the north-northwest with a decrease in forward speed is expected over the next couple of days.

Maximum sustained winds are near 50 mph (85 kph) with higher gusts. The National Hurricane Center expects little change in strength for the next day or so, followed by gradual weakening.