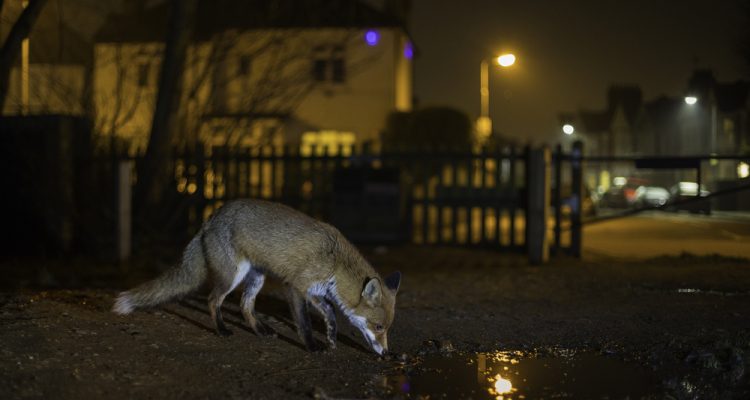 Urban foxes and other animals settle into cities, raise families

Cities in northern England have a new and growing segment of the population: urban foxes. And they’re not the only places with an influx of non-human newcomers.

Researchers are taking note of a growing trend among wildlife. Feral cats, mice, raccoons, and starlings are being joined by more exotic urbanites such as foxes and coyotes.

A team led by Dr. Dawn Scott of University of Brighton has discovered that urban fox populations in England have exploded in recent years. Numbers clocked in at 33,000 then, and they’ve risen to 150,000 today, they told The Daily Mail. Particularly in the northern towns of England, fox numbers have multiplied rapidly in the past two decades.

Protection from hunters and plentiful food have led many animals to begin calling cities home. And they’re adapting and learning how to change their lifestyles around human activity to better fit in.

“We are the biggest cause of evolution on the planet right now,” Dr. Suzanne MacDonald, a psychologist and biologist at York University in Canada, told National Geographic in April 2016.

England’s urban foxes demonstrate this well. Even though fox communities have grown in urban areas, human residents of cities report seeing the furry creatures much less. Foxes are either becoming part of the city scenery, or getting a lot better at avoiding attention.

Urban foxes aren’t the only ones moving into cities. Coyotes, hedgehogs, and other wild creatures have joined metropolitan standards like squirrels, raccoons, and feral pigeons. Some come for the safety and better meals. Others have nowhere else to go.

“To live in harmony with animals whose habitat we’re destroying, we’re going to have to do a lot more work in what we’re doing to them,” MacDonald said.

Aqua Tower in Chicago is designed with exterior terraces to look more like a cliff, which prevents birds from crashing into it as frequently. In Germany, Berlin plans to adopt “coherent greenery,” where they will connect the green spaces within the city so that wildlife can move around more easily.

Efforts are even being made in Los Angeles to build a land bridge over the 101 Freeway, which would allow mountain lions to mingle rather than live in isolation.

Some of the newly urban animals, such as red foxes and coyotes, have traits that let them successfully exist in cities without much human help.

Animals that survive and thrive in the wild by being sneaky, adaptable, and fast breeders – and those that aren’t fussy about what they eat – tend to do very well in cities, said Tristan Donovan, author of Feral Cities: Adventures with Animals in the Urban Jungle.

Red foxes actually live in greater densities in cities than in the country now, and city-dwelling coyotes tend to live longer than their rural counterparts, scientists said.

“It’s a pattern we’ve seen across the whole continent – they’re figuring out a way to deal with whatever we’ve done to the landscape,” Dr. Chris Nagy, a wildlife biologist, told National Geographic. Nagy has studied coyote populations in New York City for years.

Studies have shown that human development almost always leads to decreased biodiversity. But urban foxes and other city-dwelling wildlife show that many species can adapt and thrive in human cities.

Their presence can sometimes be dangerous. Animals such as mountain lions and coyotes can become bolder as they grow more accustomed to human contact.

However, many cities are finding solutions to help animals coexist with humans. Human development of their native environments leaves few alternatives.