Famous Utah rock formation vibrates at the same rate as a heartbeat • Earth.com 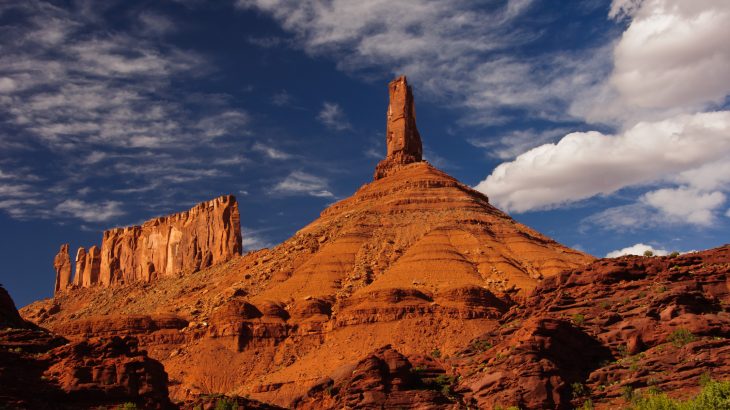 Standing nearly 400 feet tall and looming over the Castle Valley in Utah, Castleton Tower is a popular destination for rock climbers. It’s one of the largest freestanding rock towers, and the formation is constantly gently swaying, vibrating at a low frequency.

In a new study, researchers from the University of Utah measured Castleton Tower’s vibrations to understand how rock formations vibrate, their resonance, and how human-made sounds impact these vibrations.

“We often view such grand and prominent landforms as permanent features of our landscape, when in reality, they are continuously moving and evolving,” said Riley Finnegan, a co-author of the study.

Energy is continuously moving through the Earth, and even a small gust of wind can impact rock formations and cause vibrations.

The researchers measured rock formations with seismometers that record movement in three dimensions. 3-D imagery is also used to measure the dimensions and structure to help provide insights into the vibrations.

Data from the seismometers can sometimes be sped up into an audible audio file.

Studying Castleton Rock was a challenge because skilled climbers were needed to place a seismometer at the top of the tower and bring it back down. Luckily, the researchers were able to enlist the help of two professional climbers in March 2018.

The two climbers carried a seismometer to the top and waited for three hours while the equipment recorded seismic data before returning.

Once they had the equipment back, the researchers were able to analyze the data and found that that Castleton tower resonates at frequencies of .8 and 1.0 hertz. One hertz is equal to one cycle per second, which means that the tower sways back and forth once per second in a constant movement.

“The distant sources that excite the unique resonance of Castleton Tower are always active and transferring energy into the rock mass,” said Paul Geimer, a member of the research team.

The researchers still have much to learn about the rock formation and its vibrations. The team will continue to collect measurements, examine the structural integrity, and see how energy from far away sources like an earthquake or the rumbling traffic of a freeway impacts rock formation vibrations.

“As with the desert landscape in which it resides, Castleton Tower is dynamic and energetic, subtly responding to changes in the surrounding environment,” said Geimer.

The researchers published the findings in the Bulletin of the Seismological Society of America.