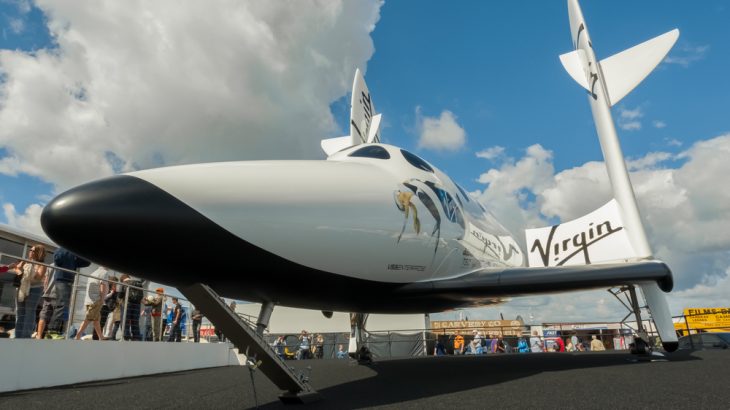 SpaceShipTwo, a prototype space plane designed by Virgin Galactic, soared more than 55 miles above the Earth in a test flight on Friday. The rocket carried a pilot, co-pilot and passenger in a first for the company.

Chief pilot David Mackay and co-pilot Mike Masucci were joined by Beth Moses, the chief astronaut instructor for Virgin Galactic and a micro-gravity expert. Moses’ role was to evaluate the passenger cabin.

Another goal of Friday’s test flight was to evaluate how SpaceShipTwo handled during its descent. The space planes twin tails rotate upward during the descent to provide slower speeds and more stability as the craft returns to the atmosphere. Then, the tails rotate back into their normal position to allow the space plane to glide back down to the ground in California’s Mojave Desert.

“If we have sort of a nominal-duration burn we will get up pretty high, but that is not one of the formal test goals for this one,” Virgin Galactic CEO George Whitesides said in an Associated Press interview earlier in the week.

The craft is carried to high altitude by a special carrier, where its rocket ignites and propels it still farther above the Earth.

“That’s not to say that we are fully done with vehicle testing, but we really are starting to move into the interiors testing phase, and that’s a really important milestone for the company,” Whitesides told the AP.

Company founder Richard Branson intends to ride a future test flight, he told the AP. He was unable to attend Friday’s launch because he was attending a benefit concert in Colombia for humanitarian aid to Venezuela, he said.

But Branson hopes to make his first flight on the 50th anniversary of the Apollo 11 moon landing this summer.

There are still more test flights ahead before Virgin Galactic is ready to start selling space flight tickets.

“We’re getting there, I mean we’re making good progress, and I don’t think it’s a huge remaining number now. There’s light at the end of the tunnel now,” Whitesides said.