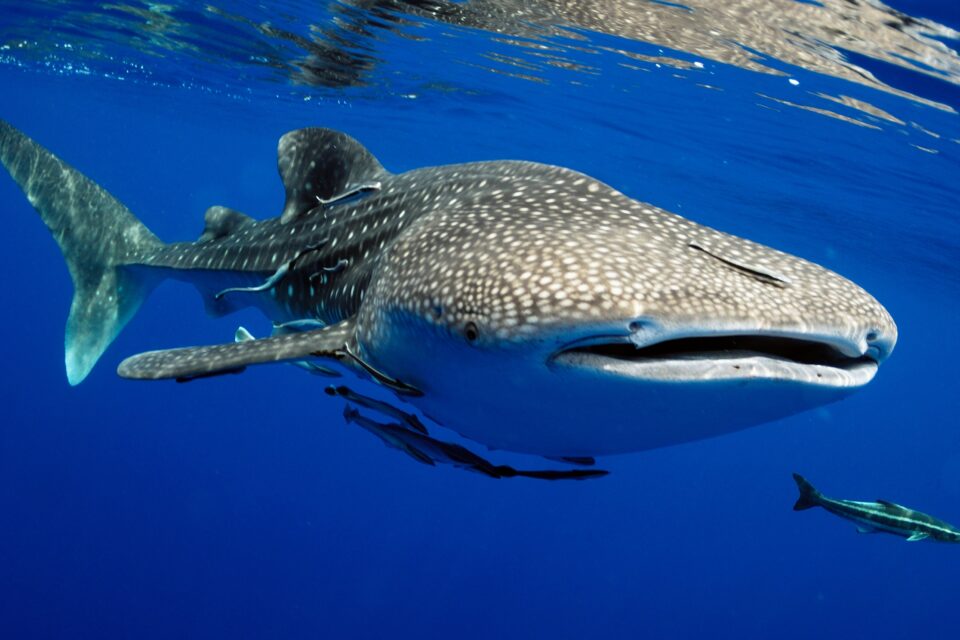 Whale sharks face an uncertain future due to ship strikes

Whale sharks (Rhincodon typus) are widespread oceanic and coastal fish that inhabit tropical and warm temperate seas. They are the largest living fish species, with males reaching around nine meters and females around 15 meters in length. They are one of only three species of sharks that feed by filtering tiny plankton and fishes from the water, making them typically non-aggressive and harmless towards people.

This species is classified as endangered by the IUCN and populations have been decreasing in recent decades, a situation that is mostly attributed to the impacts of fisheries and the fact that these sharks are often caught in nets as accidental bycatch. However, marine biologists from the Marine Biological Association (MBA) and the University of Southampton have now completed ground-breaking research which indicates that lethal collisions of whale sharks with large ships are vastly underestimated, and could be a significant reason for declining shark numbers.

The biologists hypothesized that, because whale sharks feed mostly at the ocean surface and gather in coastal regions, they would be exposed to vessel strikes, which could be lethal. In order to test this, scientists from 50 international research institutions and universities across the world tracked the movements of both whale sharks and ships to identify where the two distributions overlapped. Satellite movement data from nearly 350 tracked whale sharks were submitted into the Global Shark Movement Project, led by researchers from the MBA.

The results of their analysis, published today in the Proceedings of the National Academy of Sciences, show that over 90 percent of whale shark movements were recorded within areas where global fleets of cargo, tanker, passenger, and fishing vessels are active. These types of vessels are all capable of striking and killing a whale shark.

Freya Womersley, who led the study as part of the Global Shark Movement Project said: “The maritime shipping industry that allows us to source a variety of everyday products from all over the world, may be causing the decline of whale sharks, which are a hugely important species in our oceans.”

These giant, slow-cruising fish with their enormous mouths and placid natures help regulate the ocean’s plankton levels and play an important role in the marine food webs in healthy ocean ecosystems. They pose no threat to people and are often encountered by tourists who dive to swim alongside them and experience their majestic appearance.

Satellite tracking data from the study also showed that whale shark tag transmissions ended in busy shipping lanes more often than expected, even when technical malfunctions and failures of the tracking devices were ruled out. The team concluded that these losses of transmission were likely due to the tagged whale sharks being struck and killed by vessels, and then sinking slowly to the ocean floor.

“Incredibly, some of the tags recording depth as well as location showed whale sharks moving into shipping lanes and then sinking slowly to the seafloor hundreds of meters below, which is the ’smoking gun’ of a lethal ship strike,” said Professor David Sims, founder of the Global Shark Movement Project.

“It is sad to think that many deaths of these incredible animals have occurred globally due to ships without us even knowing to take preventative measures.”

There are currently no international regulations to protect whale sharks against ship collisions. The researchers say that this species faces an uncertain future if action is not taken soon. They hope their findings will inform management decisions and protect whale sharks from further population declines in the future.

“Collectively we need to put time and energy into developing strategies to protect this endangered species from commercial shipping now, before it is too late, so that the largest fish on Earth can withstand threats that are predicted to intensify in future, such as changing ocean climates,” said Womersley.