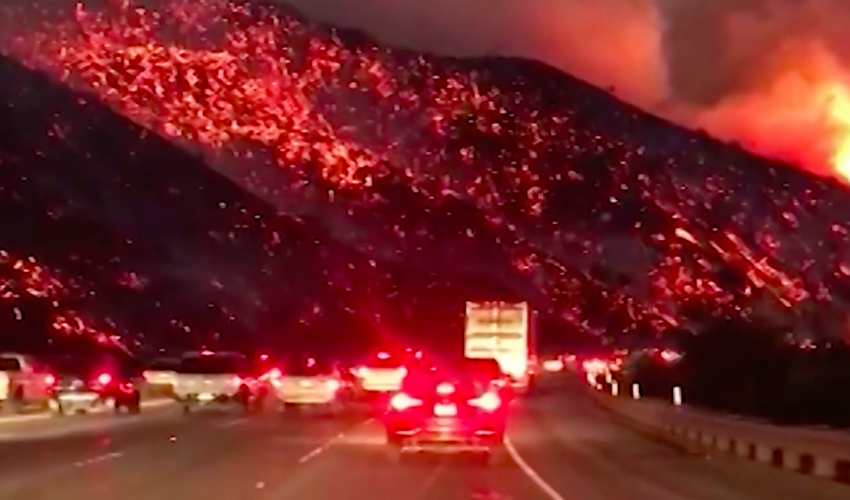 Fast-moving wildfires are raging across southern California, forcing the evacuation of tens of thousands of people. The Thomas Fire in Ventura County, which broke out on Monday and now covers at least 65,000 acres, is by far the largest. Over 150 buildings have been destroyed and 12,000 additional structures are currently threatened in Ventura alone.

A third fire, the Skirball Fire, erupted this morning near the Getty Center as a brush fire. This latest blaze has prompted evacuations from the Bel Air area and shut down portions of Interstate 405 because the fire is burning so close to the highway.

California Governor Jerry Brown has declared a state of emergency in both Ventura and Los Angeles counties, and is urging residents to be ready to evacuate and to “evacuate immediately if told to do so.”

Officials are warning that the fires could threaten the region for days. Los Angeles police chief Charlie Beck referred to the fires as “a multi day event,” and suggested that more fires are likely.

The National Weather Service warned that the combination of low humidity and strong winds could lead to “very rapid fire growth” and “extreme fire behavior.”

Chief Ralph M. Terrazas of the Los Angeles Fire Department said earlier today that wind conditions are favorable at this time but warned that could change. Santa Ana winds are projected to reach 80 miles per hour on Thursday.

Just two months ago, Northern California experienced the worst series of wildfires in the state’s history, which killed 44 people and burned 8,700 structures.