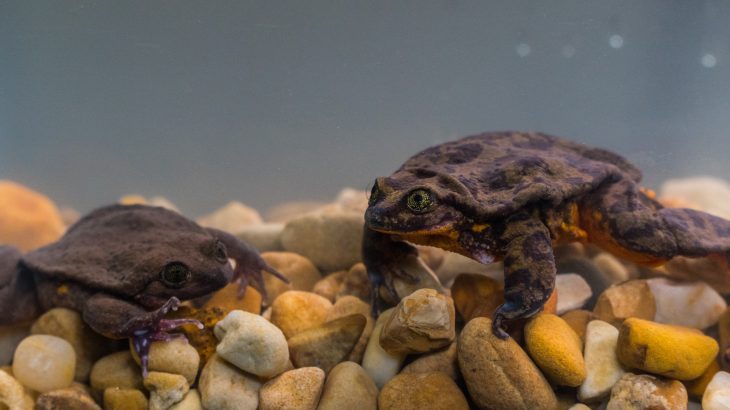 World’s loneliest water frog finally gets a shot at love

Romeo, a Sehuencas water frog collected from Bolivia ten years ago, has finally found his Juliet and the two seem to be settling in quite well together, according to the Global Wildlife Conservation (GWC).

It was believed that Romeo was one of the last of his kind and the hunt was on to find a mate fast. About a year after Romeo settled into captivity, the lonely frog started calling for a mate, but over the years those musical calls began slowing down.

“When biologists collected Romeo 10 years ago, we knew the Sehuencas water frog, like other amphibians in Bolivia, was in trouble, but we had no idea we wouldn’t be able to find a single other individual in all this time,” said Arturo Muñoz, GWC associate conservation scientist.

A massive campaign was launched to find a Juliet for Romeo and help save the frogs from extinction. Last February, Global Wildlife Conservation, Match.com, and the Museo de Historia Natural Alcide d’Orbigny where Romeo lives, teamed up to give Romeo a global platform and even his very own dating profile on Match.com.

The goal was to use Romeo’s profile to help raise funds for expeditions into areas of Bolivia where Sehuencas water frogs were once abundant and hopefully find Romeo’s other half.

After raising $25,000 and receiving worldwide attention, the Bolivian expeditions were hugely successful, and Romeo is now no longer the world’s loneliest frog.

Juliet, a female of the species, was discovered in January of this year, and after taking careful measures to ensure that Juliet was cleared a deadly infectious disease called chytridiomycosis, the two went on their “first date.”

Researchers introduced the two frogs into a single tank to see how they would interact, and their first meeting went so well that Juliet moved into Romeo’s aquarium soon after.

“When the fate of an entire species is on the line, there’s really no time for taking it slow before committing to moving in together,” said Teresa Camacho Badani, the museum’s chief of herpetology. “Romeo has been really sweet to Juliet, following her around the aquarium and sacrificing his worm meals for her. After he’s been alone for so long, it’s wonderful to see him with a mate finally.”

Romeo even started calling for a mate again when Juliet moved in but as far actual mating goes, the once single bachelor is having a hard time figuring out the right positions, according to Global Wildlife Conservation.

When frogs mate, the male takes a position called amplexus where he grasps the female and holds on, sometimes for weeks or months, until he can fertilize the female’s eggs.

Romeo has been able to get into the amplexus position but only a few times and not for very long. Still, having the two frogs together has provided a unique research opportunity to monitor their interacting together.

“For now we’re keeping them together, and observing them, which as simple as it sounds, is already revealing previously unknown behaviors and answering natural history questions about this relatively unknown species,” said Chris Jordan, Global Wildlife Conservation’s Central America, and Tropical Andes coordinator. “It has served as a reminder of how little we know about a lot of the species with which we share this planet.”